What is the funniest/quirkiest hostname you've ever given to a Linux box, or phone? Nothing crude/dirty, please

My funniest hostname in the past had to be “cubanb”, which was a funny moment in the movie “Half Baked”, where the villian of the movie, during a dramatic moment, says, “Yes, Cuban B!” after another charater explains how he is “Cuban, B”. 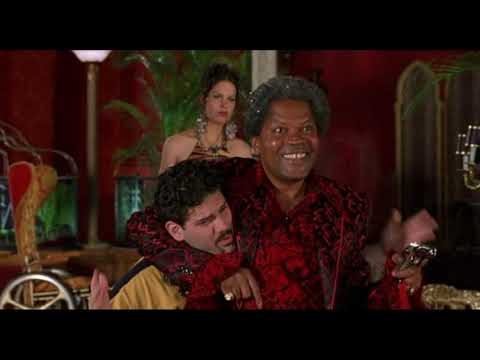 I use android phone and name my network “Max’s iPhone” since there are often so many "'s iPhone"s around.

I am curious how you actually change android hostname? Does android 12 allow it by default? I’m still on 8.

I am curious how you actually change android hostname? Does android 12 allow it by default?

About 20 years ago I setup a network for a client and used nursery rhyme characters for names on the network and set the main host to Mother Goose. The CEO contacted me and told that it was too confusing for the workers. They wanted Debbie’s computer to be named Debbie not Little Red Hen, etc…

About 6 months later, they had churned so many people in that office that a woman named Heather was using Debbie’s computer and a new hire name Debbie was using a computer named Sue. The CEO called me and asked if we could change stuff back to names like fox and hen. LOL

My main laptop is called Gemaura as in Gemma and Aura (the laptop model), and it rhymes with Fedora which is the OS running on there. Pretty neat huh, eh eh!

My home network is currently called “No Internet Acess”. When we were setting up my husband’s new phone, he took it at face value and thought our internet was down.

LOL, you were trying to help them out! They eventually saw the light.

I think they are all regular hostnames.

I tend to hostname my desktop VMs “fauxputer”.

edit: although I’m probably going to take a page out of @x3mboy ‘s book and start using Dragon Ball characters.

Well, I was thinking on moving to pop stars, but I have no money to have another host (server or PC), so it will have to wait.

I name my USB Sticks and external Drives mostly after characters from the videogame series King of Fighters since 15 years or so, just to tell which one is plugged in currently. And one time I was at a friends house and and brought a few USB Sticks with different content on it and couldn’t find Kim anymore. I must have looked like a father searching for his son Kim left and right.

Later my friend told me that he was totally amused about this and thought I am such a freak. Golden times.

Nowadays I don’t use much new external drives anymore. Edit: BTW, Kim is still around here and the one I use most often. In example to install Linux on Laptops or my main PC.

I use the characters names from the books of P.G. Wodehouse.
There’s Wooster, Jeeves, Elmsworth, Baxter, Pongo, Stinker, Bingo, etc etc…
There’s nobody i know that has found out where these names come from yet.

I tend to name my computers after ships from works of fiction. My desktop is “highwind” (the big airship from Final Fantasy VII. My main laptop and raspberry pi are “moya” and “talon” (Farscape). My old Lenovo laptop is “serenity”, because “the individual parts may be junk, but put 'em all together and you got yourself a firefly [thinkpad], and those things 'll run forever.”

My current server is called nevyn from Kerr’s deverry series.

Characters in the Deverry Cycle

This article lists some of the major characters in the Deverry Cycle by Katharine Kerr. Cullyn's daughter, who has latent dweomer talent. As a child, she follows her father on his wanderings, and learns swordcraft from him. Jill becomes Rhodry's lover, following him into exile. After being separated from Rhodry, Jill is abducted by Perryn, who places her under his strange spell, though Salamander eventually rescues her. Perryn's influence causes Jill's latent dweomer abilities to manifest...

I had a Sysadmin job a long time ago where I set up a cluster of Linux boxes named after video game characters (Mario, Luigi, Megaman, Strider, etc… 40 of them), and this lasted about a year, but my co-workers eventually felt this was too immature, so upon re-installation at one point, the cluster nodes got renamed to famous scientists, and each co-worker got to nominate a few of their favourite scientists for the naming (so they played a part in feeling like they “owned” the cluster, not just me).

We all had Computer Science degrees, BTW. That was our commonality: hard science.

The servers (not cluster nodes) had some very eclectic names, one was very crude, and I was able to negotiate to changing it to “scotch”, as some of my co-workers were into fine scotch. The previous name started with “s”, and ended in “tch”, had the same number of letters, and was a derogatory word I won’t say here.

The previous name started with “s”, and ended in “tch”, had the same number of letters, and was a derogatory word I won’t say here.

Since I haven’t cleared the brain fog yet today:

famous scientists, and each co-worker got to nominate a few of their favourite scientists for the naming (so they played a part in feeling like they “owned” the cluster, not just me).

Such a great idea.

…and it wasn’t too long after that we hired our first female employee. So yah, good timing there.

I named my Raspberry Pi supercomputer 1 not exactly comical genius but it makes me smile.