Heard y’all talk about checking out pihole on the ep 56. I highly recommend it.

I set it up on an old laptop running Ubuntu server 20.04 about a month ago. It’s a lot of fun blocking ads and reports home from all the different devices on my network.

You can grep the pihole logs and find domains that might not be on your ad-list. The only problem here is that unless you tell your hosts to use the Pihole as their DNS it is sometimes hard to parse those logs, everything is shown as your router making the request. And a lot of devices you can’t change their DNS server. Like a smart light, or vacuum. But if you have a router that lets you look at the DNS logs, one running OpenWRT, you can grep those logs (after you enable logging) for the specific IP of the devices. Then find out that the smart TV that Sony has dropped support for years ago is still sending analytics back to sony. Or your smart light is sending in usage data every time you turn it on or open the app.

Thanks for the great show BTW

PiHole was my first RPi project several years ago, right after attending a Linux meeting hosted by @dasgeek That was my introduction to Destination Linux.

PiHole is awesome. It’s very easy to use for internal DNS records.

PiHole is awesome. It’s very easy to use for internal DNS records.

@anunarmedpawn: welcome! As for the DNS on PiHole, can’t you set it to be the DHCP server too (and disable DHCP from the router)? I haven’t tried this yet due to lack of time to take everyone off then network if something goes afoul, but it should then show all the traffic per device, instead of as the router as the only device.

Yes, that’s what I do. I’ve disabled DHCP on my router and switched it on the Pihole. All the reports have PC or device names now and are much more readable.

I have my DHCP server assign the PiHole is the primary DNS server and I, personally, assign Quad-9’s public DNS as the secondary DNS. This way, if the PiHole experiences any type of outage no one is impacted (other than getting ads until the PiHole comes back online).

This is just my preference, YMMV.

Yeah, looking back this probably was the better option. Now I’ve figured what I want to block for each device. I may have been a bit excited to play with a new router with open source firmware on it. It would be great to hear an episode on OpenWRT if there isn’t one already
cheers

Second that! An episode about OpenWRT or DDwrt would be wonderfull.

I’ve been running DD-WRT for about 20 years and love it. I have not run OpenWRT, but I may install it on one of my backup AP’s to take a look at it.

I want one of the WRT routers, but don’t have one. I also want to change my PiHole to do DHCP too, I’ll add it to the summer project list… Enjoy using PiHole though!

I love the information you can mine from PiHole. Not only can it help you see who is phoning home, it provides frequency metrics.

I’m about to switch streaming devices because of the information I pulled from PiHole. For example: 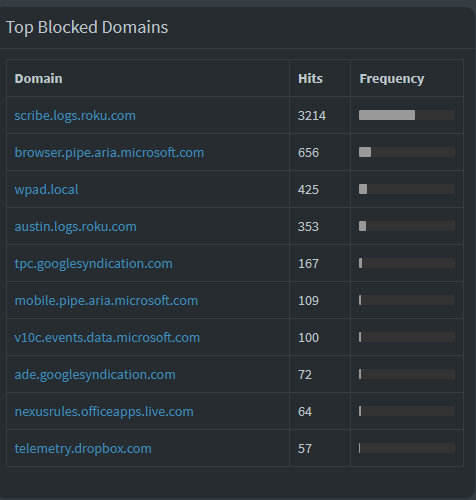 Roku is just to chatty for me, it’s got to go.

I love the PiHole interface. You really don’t realize how much bandwidth is being stolen from you until you dive into the details. 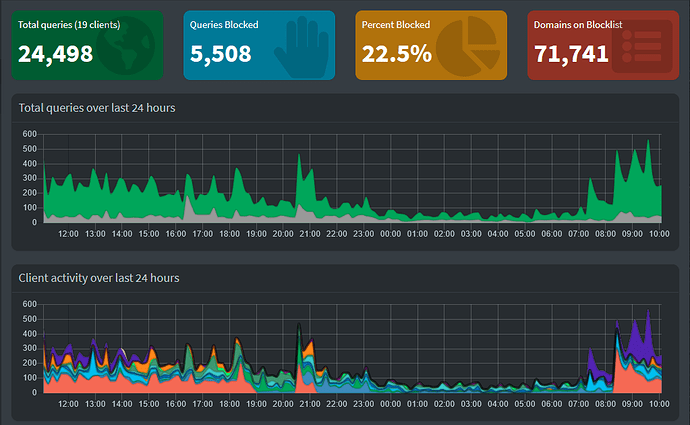 I’d love to charge Roku and Microsoft for the bandwidth they are consuming on my network.

Remember, though, that the 22.5% Percent Blocked is not bandwidth, it 22.5% of DNS queries that are being blocked.

Thanks, apparently it is supported…Definitely added to project list.

I had a RP sitting in a closet for years, never knowing quite what to do with it. Then I saw an article about Pi-Hole and gave it a shot. It’s now become one of those can’t imagine life without it tools. The amount of useless chatter on a fairly small home network is almost insane. Tuning the block lists took a little time but it’s not difficult and so worth it. My favorite benefit is blocking most of the annoying ads in mobile apps. When I’m not home and without the filtering I am reminded of how awful some of those apps can be.

“Can’t imagine life without it…”.

I could not have said it any better.

I’ve thought about the mobile space as well. I haven’t ventured into Wireguard, but I’ve seen DO tutorials for Wireguard setups with PiHole precisely for that.

I have set up pi hole on my server/laptop only to discover my isp provided router doesn’t allow me to change some of the settings…Grrrr.

I have 3 other routers here and none are supported…double Grrrrr.

Still working on a solution for my case.

Does your ISP allow for bridge mode on their provided router? If so, this would allow you to use your own router by configuring their device as a type of pass-through.

I think so, I’ll have to check.

That’s been on my do to list, and is the cheapest route to using pyhole without buying a new router.

If you already have a home lab server (Linux), there is a cheaper way. PiHole can be run in a container or as a VM, so no additional hardware required other than the VM host or server running Docker.