Microsoft Edge on Linux - any takers?!

An alternative would be the Honey extension.

Odds are they’re both querying a central database with the URL string of every page you go to to see if there’s a discount so it’s RIP for basic privacy but you could mitigate that by turning it off till you need it and only use it with that site.

The chrome-based Edge, to be fair, is MILES better than the original version of Edge that shipped with 1511.

That said, whilst I’ve tested it on my Win10 work machine, there’s no way it’ll get anywhere near my Linux box at home. I have Chromium installed there for web-dev testing purposes, but that’s about it. Firefox gets 99% of my web-usage in Linux.

Firefox gets 99% of my web-usage in Linux.

I switched to Waterfox after Mozilla’s censorship initiatives.

With some light hunting it seems the initiative from 2017 still exists but I can’t find an example of them having ever deploying any code to the browser? The updates are pretty sparse and the last one was mid 2019 seeking money. That initiative should have never occurred to Mozilla but I wonder if they’re semi-shelving it for now.

Apparantly they took money from George Soros to start it. 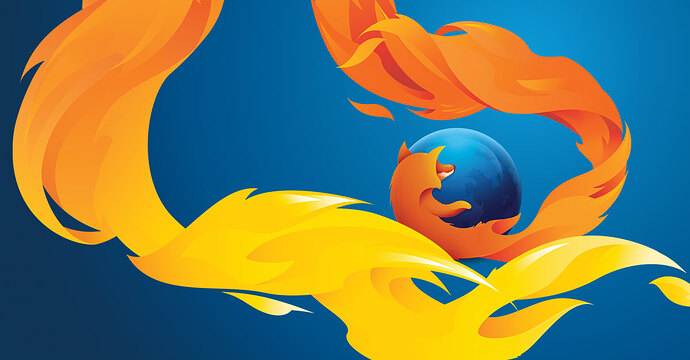 Here is another initiative they took on very quickly. 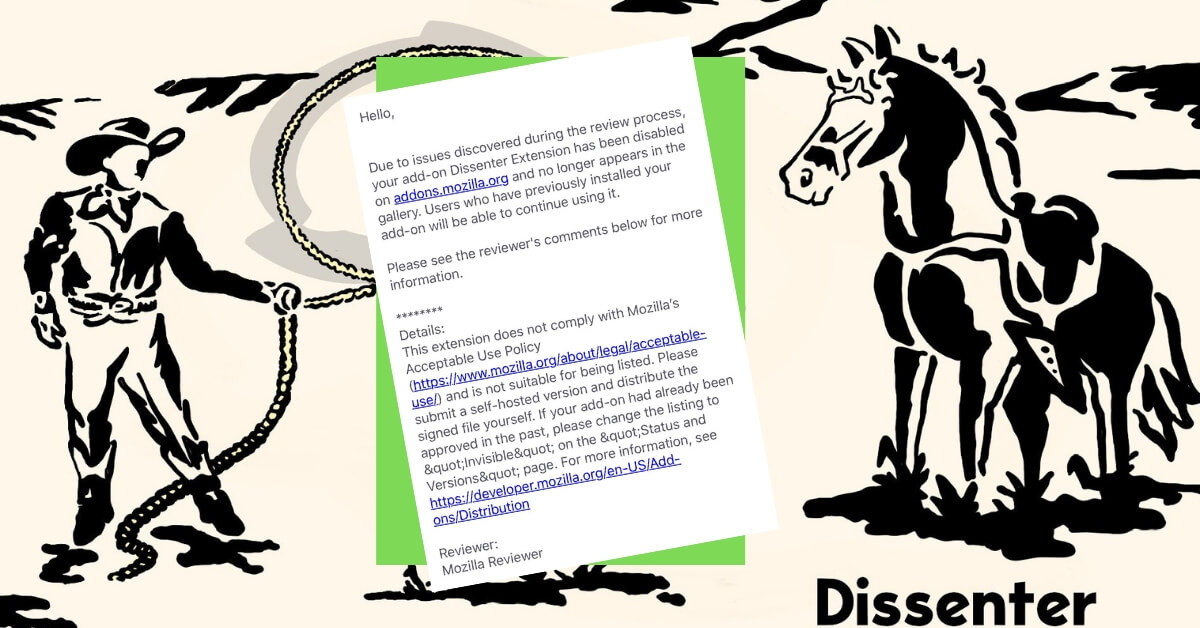 Mozilla, the company behind Firefox, said that the extension had been disabled because it does not comply with Mozilla’s Acceptable Use Policy.

Where some see censorship, others see an attempt to fight the spread of deliberate and calculated misinformation from certain types of public figures & “news” organisations.

So I guess Ancient Aliens would be on their hit list.

Where some see censorship, others see an attempt to fight the spread of deliberate and calculated misinformation from certain types of public figures & “news” organisations.

I think everyone agrees it’s a mix of both.

The problem is a centralized initiative would have to be almost exclusively bot driven to manage the sheer volume. That forms incentives for “bot-friendly” journalism creating an environment of self-censorship around difficult topics that might produce false positives.

Assuming perfect precision under a reasonable interpretation of truth (for which there’s surprising disagreement)… these tools are usually set up to selectively target one political side which lends credibility to the misinformation of the opposing side by lack of take downs.

My current feeling is moderation belongs in the hands of small communities who can do it by hand and understand context. The overlord approach ends up practically Orwellian by default.

It’s why FOSS projects like Linux are so critical because good developers can protect users by forking away attempts to overlord everyone’s experience.

Good response on your part.

Unfortunately, forking does not always work out so great, Case in example. Google Chrome/Chromium and Firefox maintain probably 99% of market share of browsers now.

While there are standards from the W3C organization, each browser will have additional functionality outside of W3C. Since they have so much control now, web site builders will go outside of W3C and use the other functionality available in those two browsers.

The developer of the forked Firefox browser, Waterfox, has already stated that he is forced to send an identity of Firefox . Otherwise sites will not display correctly.

Since Chromium based browsers are probably in the 96% market share, it gives Google a lot of forced control on how the web will be. If forks of Chromium do not comply, sites on their forked versions will not display, nor function correctly. Some of the biggest complaints I have read are about banking sites.

Microsoft did not help things by making their Edge browser based on Chromium. Nor is anyone else forking yet another Chromium project,

At least with a Linux Distro you can avoid that browser problem, and create your own universe on a computer; at least for now.

I think, for now, it would probably be better setting up some sort of independent organisation, responsible for fact checking information released by Governments & larger organisations, rather than relying on automated systems. But then again I’ve just re-invented the likes of Full Fact

But as you say, automation can be gamed and automatic systems rarely understand context or parody, so I think with technology at the level of progression it is now I don’t think it’s smart enough to be relied on 100%. Perhaps have a body like Full Fact or this Mozilla initiative review decisions made by automated systems.

Fake News is definitely a massive issue in the current political climate, and I long for the days where we aren’t seeing politicians just blatantly, bald-facedly, openly and knowingly lie about facts that are public domain knowledge and we can put even a small bit of trust back into the political system. It’s definitely become WAY too polarised over the past 4 years.

No. Never. Because I moved out from Windows in early 2017 and do not plan to go back. Now I slowly move out of Google. Also, I was hoping that GOG.com will release their GOG Galaxy 2.0 for Linux but they never did. So I messaged them saying that I will never buy any more games from them if they continue to ignore Linux. I will be buyng from Steam, as these guys seem to be supporting Linux with Proton, etc.

Fake News is definitely a massive issue in the current political climate, and I long for the days where we aren’t seeing politicians just blatantly, bald-facedly, openly and knowingly lie about facts that are public domain knowledge and we can put even a small bit of trust back into the political system. It’s definitely become WAY too polarised over the past 4 years.

It does not help when so-called “legitimate news” organizations are backing up false claims of their preferred politician.

I think, for now, it would probably be better setting up some sort of independent organisation, responsible for fact checking information released by Governments & larger organisations,

One already exists, but they have already been labeled biased. They put out a browser extension called NewsGuard.

Had a look at NewsGuard. Seems fine to me, and labels sites I’d expect to get flagged as full of lies, such as Info Wars, as such, and more reputable sites such as BBC as more trustworthy.

And yeah, places like the BBC are very heavily leant on by the Tories in the UK, hence their more tory-friendly tone over the past few years. But as long as you’re aware of things like that you can mentally filter their approach effectively.

But gives History.com a clean bill of health while publishing fake content from Ancient Aliens.

If I’m going to give Microsoft complete access to my machine I might as well be running Windows.

I view stuff like that as “entertainment” rather than actually being factual. Mind you I’ve never watched it, so I’m assuming they’re not presenting it as actual fact?

I don’t think I’ll be putting Microsoft inside my Linux, if I can help it. They aren’t doing well with Windows. I don’t think they’ll be any better with Linux.

Yes, History channel may be entertainment, but they make no such claims, but yet Newsguard gives them crditibility. They also make false statements against Project Veritas with “deceptively edit video footage, to discredit…” which is not even true. They have long videos of showing people doing wrong. They have to take segments of interest to make it in presentable form to show key points, or highlight parts of it for presentation. They also make the full raw video footage available so you can see it is not deceptively edited. . I am surprised they have not sued Newsguard yet.

I’d never heard about PV before, so I’ve had to do some reading up. I’d say from what I’ve read, that Newsguard is probably more right than not tbh.

PV seems like they’re the National Enquirer of American Politics, and they’ve been successfully sued a few times for using deceptively edited video, which is one thing that seems to have cropped up in multiple mentions across various websites: their modus operandi seems to be using video that’s edited to frame information in a certain context to suit their political leanings.

PV may have the odd nugget of journalistic worth in there, but it appears to be swamped by the majority of their otherwise Enquirer-esque reportings.

I’m of the opinion that if a publication is either extremely right or left wing then whatever they’re saying can’t be trusted to be without inherent bias. I’d love to find a good, reliable news outlet that’s neither left nor right, and just reports the facts without spin or bias (as much as humanly possible).

My personal political leaning is slightly left of center, but I’m quite happy to listen to similar right-wing reports if they’re presented without a bias or sensationalist agenda.

PV seems like they’re the National Enquirer of American Politics, and they’ve been successfully sued a few times for using deceptively edited video,

That’s what I am talking about. They have never been successfully sued for anything. Every single case they have been sued for has been thrown out. The so-called Main Stream Media is producing more fake news than Alex Jones. All they have to do in the USA is report whatever they want, then print a retraction, or clarification to be clear of lawsuits. Somewhere, PV has a list of over 400 retractions done by major media outlets.

I’d love to find a good, reliable news outlet that’s neither left nor right, and just reports the facts without spin or bias (as much as humanly possible).

I would like to see it also. You can watch recording of old news broadcasts done back in the 70s and 80s. The reporter just sits there reporting the facts of each story of the day, and that was all they did.

Walter Cronkite on CBS did a great job at that. When reporting the news he would sit at an angle with his glasses. At the end of the broadcast, he would remove his glasses, and switch directions. Then he would give his non-politically charged respectable opinions on items in the reporting.

What is sad, even the FOSS community has started to show bias, and politically charged also.