I have a computer collecting dust in the garage with the following specs:

I already have 3 workstations that do everything I need, so I don’t need another computer for any desktop work.

I already have a Synology NAS so no need for that.

My only ideas of what to do with it are:

Any other ideas of what to do with this machine would be great. Thanks!

That’s quite a system you’ve got collecting dust there. I’d personally put it to use as a media machine, hooked up to the telly with Kodi so I could browse my local media with a Bluetooth gamepad (or a wired one with a sufficiently long cable).

The media machine idea could work. What distro would be good for that? I could probably also have my Nextcloud instance running on it as well. What bluetooth gamepad to you like?

That’s almost exactly the same as mine, and I still don’t find this old. Only reason why I need an upgrade is to run VMs and multi-core.

You can run that on Nextcloud or media PC, (as suggested by @WalJT) , but donating to a local charity wouldn’t be such a bad idea.

Do you have family who like movies and entertainment? Plex media server might be a good use. I run Plex Media server in a docker install running on Ubuntu Studio 20.04. Apps on phones, tablets, tvs, roku sticks, etc work painlessly.

I’d go for something Ubuntu based and grab Kodi from the PPA, which is recommended on their website. I’d set up auto login and have Kodi start up automatically. I haven’t done this myself, as I don’t have a machine to dedicate to it. I might experiment with it on my laptop at some point though.

As far as controllers go, I have a Playstation 3 controller that works pretty much perfectly in Linux. I’ve been thinking about getting one of these (8BitDo) but I don’t know how well they work under Linux.

I’d say the spec are overkill for only Kodi but if you plan to use it only for Kodi you can take a look at LibreELEC, a distro specifically made to run Kodi. I installed it on a raspberry pi 4 and it works like a charm. Previously I had a Mac Mini with Ubuntu that ran Kodi and other stuff.
For the controller I have a Bluetooth keyboard and the tv remote is also working (needs CEC capability on your tv).

I tried Plex server on my Synology NAS but it was clearly not strong enough. Your « old » computer should be fine running Plex server if you prefer their system.

With that system nextcloud alone would probably overkill but maybe adding in collabora would be nice to try out. 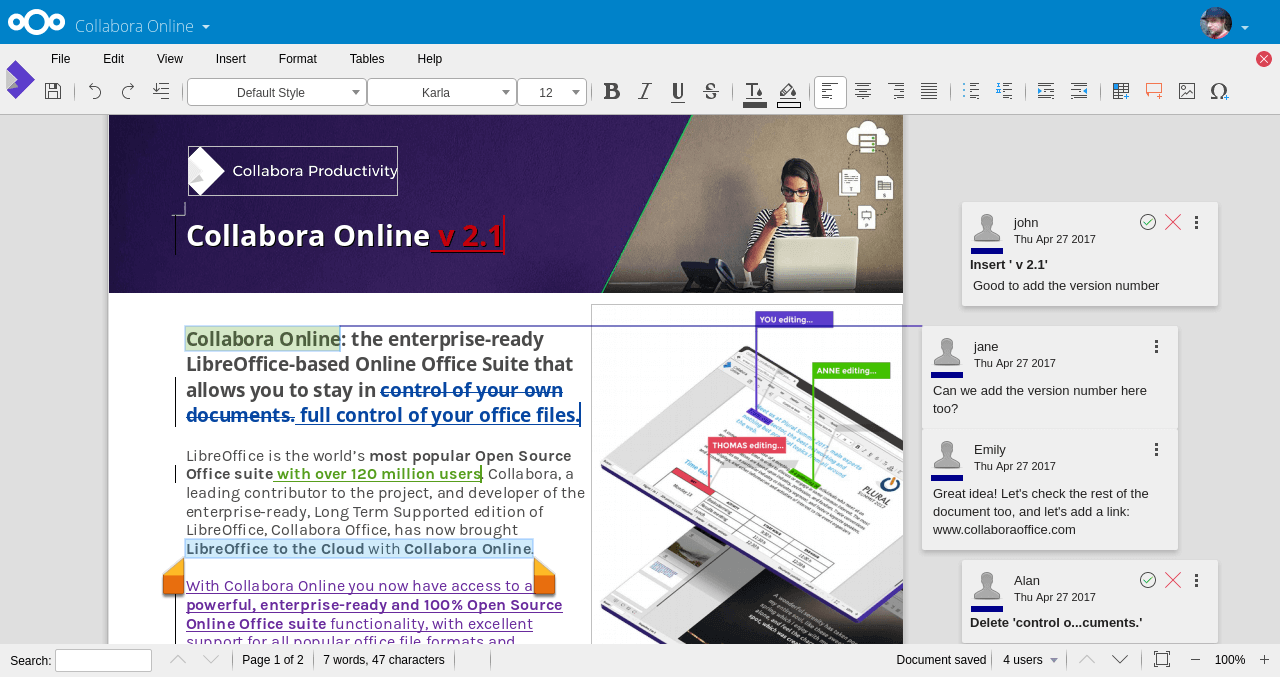 How to install Collabora Online in Nextcloud Hub - Nextcloud

Collabora Online is a powerful LibreOffice-based online office suite with collaborative editing, which supports all major documents, spreadsheets, and presentation file formats and works in all modern browsers. The recent release of Nextcloud Hub v19...

That is how I used Kodi hooked up to a TV before my Raspberry although it was with an under-powered netbook. I used and still use Kore on my phone to remote control it. Now I use LibreELEC but that should also work on a normal laptop.

Yeah, virtual machines don’t run all that well on it which was one of the reasons for my upgrade to something more powerful.

My Synology NAS streams all of our media so not sure what advantage Plex would bring.

My Synology NAS streams all media to our devices, so I’m trying to figure out what advatnage Kodi would bring.

I tried using only the Synology app but like with other solutions the deal breaker was on the formats. Video station can’t read DTS (or Dolby I don’t remember now). Kodi reads everything period

The advantage of Plex to me would have been a consolidated library, updated from any device I use to watch videos.

add two more spinning drive HDDs 2 TB and setup raid and NextCloud it is way better then synology, I personally would recommend CentOS over ubuntu, CentOS with enhanced Linux securiry.
Or setup a router with OpenWRT or firewall endian community edtion.
OpenWRT is way better and more secure then any store router you can buy.
OR just install steam set it up in the living room as gaming PC or to watch Netflix,HBO,Hulu etc.
FYI I used a laptop with Intel HD GIU, CPU i5-3317U + 8GB RAM as home media PC, games Netflix, etc … your PC is not old at all if you ask me. in 2018-2019. that is a gaming class PC will handle HD or UHD videos no problem.
I personally don’t trust Silology they send too much “analitical” data, I am not saying they are spying but IN general I don’t trust or non FOSS software, except for STEAM since I trust the company with proven track record. When it comes to for example Adobe, I would not trust them even with FOSS apps.

I guess you’ve got media covered then… I don’t have a server of any kind, so I watch stuff on my laptop hooked up to the TV. I have DVD Rips stored on my desktop, so I have to copy stuff to the laptop in advance (or watch sitting on my creaky old desk chair

I’d use machine like that as a dedicated box that stores all the files and boots straight into Kodi, so I can control the whole thing with a controller (only use a keyboard if something goes wrong, or to check for updates every now and again).

Have you seen and used the Plex interface? What is interface like for your NAS? Folders and files? If it’s not detailed information about the media, actors, scenes, directors, etc…, plus being capable DVR over the air, then there might be room for improvement.

Check out a couple of youtube videos on how to use Plex (not just the install but how to utilize the interface). Such as:

You’ll be able to answer your own question re what advantage it would be.

Those are great recommendations. The motherboard supports RAID 1 so do I set up RAID through the motherboard bios or do I do it on the desktop software side?

I could probably run nextcloud instance on it to selft host and also use it as a media pc. A lot to think about regarding how to set it all up.

I actually don’t like my Synology NAS very much but it’s relatively new so I’ll stick with it for now.

really don’t like to sound bad about this but sinology has over 129 proven Security Vulnerabilities in the past few year only Synology : Security vulnerabilities
most of them 7-8/10 serious security risk. compared to Linux in general with not more then 10 serious know Vulnerabilities in the past 10 years and all of them solved in few days or a week and most of them are solved if you update kernel and apps, and if you use linux router and firewall (openWRT+Endian) probably you will not be affected by them at all even if the OS is out of date and not updated.

Yeah true no OS is 100% safe, but Linux is safer then Sinology in this case.
My advice is long term find a Linux solution if you value security and privacy.

I see your point but I’ll just add that the technical know-how is very different. I feel like things can really go wrong if you set up your linux NAS the wrong way compared to the ease and relative security of a default Synology set up.
Not everyone is an rocket science engineer

you can buy a linux pc setup with next cloud and raid same as sinology and Linux of your choice, for a small fee, I see even amazon offering deals like it and dell, hp, lenovo with preinstalled linux and the system76 is a professional company working with Linux offering support I even saw a german company that sells laptops offering “Linux Home install service” NAS IoT Camera Linux PC etc. or you can get a FOSS service like OpenHAB cloud hoster/self hosted to manage your devices (one example of many).

In my opinion in 2020 you can get same or similar level support for any Linux device as you would for windows mac os (I live in germany Hamburg, again I might be wrong about rest of europe / world).

My GF is a finance major and her friend is bio chemist, both mac os users for 10 years, moved to Linux and even learn how to make backups with dejadup, timeshift even do full install in arch manjaro Linux.
Using Linux in 2020 is no rocket science based on my 10 year experince, If my finance major GF and her friend who is a bio chemist can learn basic Linux management in a year (after 10y+ of being MacOS users) WendyG said is using Linux for 20y+, double time them me, advice was for a 20y+ Linux User.

What distro are you running?

Been using Linux for 20 years

EDIT: even really cool preinstaleld devices are sold by a company with KDE Slimbook KDE you can choose any Linux with KDE de to be preinstalled on it. Linux Rocks in 2020.

Same “mistakes” can be done with Synology, probably the biggest and most dangerous thread to online safety is “stock router” 80-90% of people use at home, get updates for the first year then nothing and in average people change routers every 5-7 year or until it breaks down or you need more speed.