For those just getting into photography, or for those wishing to take their skills to the next level, can some of you that are more experienced talk a little bit about your naming standards for photos and how you organize from the beginner, perhaps before a shoot?

Do you apply naming standards within your camera or afterwards with RPD?

What is your naming standard, or how does one getting started with a naming standard? I’m not working for hire, just a hobby and I may shoot different subjects during the day. I can always learn the hard way, but I don’t want to start with something that I will have to change later into a workflow. Since I’m just getting started, help me start off correctly.

I just installed RPD and Darktable.

I’m not completely new to photography, but I’ve never really had a workflow before. I used Apple’s Aperture back in the day. I used, and still have, a Lumix G6 micro four-thirds mirror-less camera. I’ve decided that I want to get back into photography and just bought a Nikon d7500, which so far seems to be a decent camera.

I have a naming standard I use for just about everything. I break it down like this:
Who - What - When

So, for example, when I was managing LOTS of people, I would name things like this
CubicleNate-Certificate-20210319.pdf

But I made some modifications to that standard depending on if it is personal or something to share, not saying this is a GOOD idea but this is what I do. Lets say I get a document from an organization and I want to file it.
DestinationLinux-20210319-Agreement.pdf

I don’t do much with photography, but I generally do similar with my files, with the only hard constant being the 8-digit date. When I do make modifications do a photo or image, I will start saving it off with -c0 -c1 -c2 because in my mind they are “change 0” for the original, c1 = “change 1” and so forth. I reserve “version” for other things.

I am not going to say this is a good method, but my method. Maybe someone else has a better solution. I do know that I can search my file system with just about any tool to find what I want if I mis-file something.

At what point to you apply this naming standard, in the camera before you shoot, during the upload with something RPD, or some time after?

Usually after. I leave whatever the camera default is initially because it has a date and a sequence number. Whenever I am ready to scan through and use the pictures is when I start naming them. I largely leave the original photos in an unmodified state.

I just shoot pictures for fun so just use the standard rapid photo downloader settings. Each date it’s own folder.
Then I import the folder in darktable. 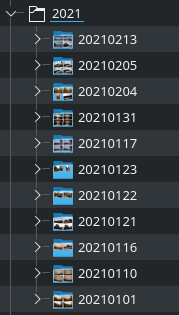 I let Rapid Photo Downloader handle image naming. Under the “Rename” tab I’ve chosen Date-Time and Image number, which is the information I find most useful. I also shoot RAW+JPEG (since this is a hobby for me, and if the out-of-camera JPEG is fine, then the out-of-camera JPEG is fine) and I’ll create a “JPEG” folder and move the JPEGs there, ending up with this kind of setup: 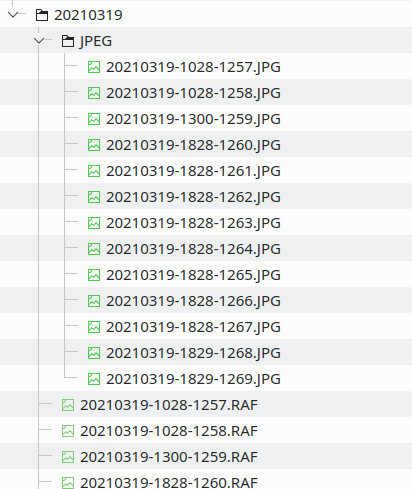 The files will stay there for weeks or months, until I get time to sit down and go through the photos I’ve taken, after which edited files and JPEGS I deem good enough get moved to my primary photo library on another drive that gets managed by Digikam. I keep the filenames, and organise them into collections, some based on the date for particular events, and others based on the subject or type of photo.

Then by date it is.

Thanks for the feedback.

The date format looks beautiful. Such a nice, clean, easy to read format!

I’ve started tagging things by place, and then event. If you use DigiKam, you also get the super useful “face tag” option. While this is not nearly as accurate as Google Photos, (at least with the amount of photos I’m working with), it’s also far less creepy, and still very useful. I mostly just go through and fix all the matches when I “confirm” the faces it recognizes. This gives me a separate option to search by people.

One question I have for @TheWendyPower is whether there is a way in DigiKam to group Raw files and JPG files. I import both just to be on the safe side, but it would be cool to be able to rate and tag them as one “image”. I’m not sure how to do this though.

A most excellent question.

An old thread, but a good one, so I’m going to bump it.

I have a preset in RPD that downloads the raw photos to my ~/pictures/inbox/YYYY/YYYY-MM (and renames them to YYYY-MM-DD-HH-MM), which I then import into darktable with one star. I then review them pretty and rate them two star (good ones) or rejected (all the rest, about 90%. I then edit the two stars and again reject the ones that don’t work. The ones that work get a third star and are exported as jpg to ~/pictures/outbox and uploaded to my website. This is between 1-2 % of all photos taken.

I have a similar process to pick the ones I promote to five stars and print.

Every now and then I move the directories from ~/pictures/inbox to ~/pictures/archive.

The entire ~/pictures is synced to my nextcloud and backed up nightly to an external hdd and to an online backup service. My editing laptop is backed up not often enough to another external hdd.

almost the opposite of the old adage “measure twice, cut once”. In photography and videography, it’s shoot often, cut even more.

Yes. I don’t know if that works for everyone, but certainly works for me. Culling the photos helps me learn what works and what doesn’t. Taking a lot of photos makes sure there’s a lot of material to learn from, but without culling the actual learning process wouldn’t be there.

I have my own website mainly because without that, I wouldn’t have any pressure to do the culling or editing, and would probably just have tons of photos in some write-only drives somewhere. And looking back at my photos from only five years ago, I now have a much clearer understanding of what I want to do with photography.