For those few that know me, I don’t do a lot tech-wise during the summer since I end up hanging out on the back deck with a cigar (or two) and an adult beverage almost every night. Winter however, is when the geek takes over to keep from being bored when I can’t be outside. With summer hopefully coming to an end (it was 101F here yesterday! It’s friggin’ OCTOBER!), I’m preparing my next project.

I currently have a half rack of used enterprise equipment in my basement and one component is a NAS with ~160TB of raw storage running FreeNAS. It’s absolutely fantastic and rock solid, but it’s in the basement while my home office is on the 2nd floor of the house. I haven’t ran ethernet between the two yet (long story) so I’m on wifi in the office & I/O to the NAS can be a fizzle frustrating at times with larger files. So, my solution to that problem & boredom prevention… another NAS in the office. Plus, I can have the two sync so I end up with another local copy of my files. Anyway…

I’ve been casually planning the build for a couple of weeks and came up with the following criteria:

I’m still working through some of the components and setup but the first step has been taken, the motherboard. I found a pre-owned Super Micro X10SL7-F on eBay for $50. It’s small which will help me keep the space used in the office to a minimum while still giving me 8x drive connections and supporting ECC memory as well as a lot of other standard “server class” specs. Someone mentioned the VGA & only one expansion slot but I doubt I even have a monitor plugged in after the initial install. I also have some extra RAM thanks to the servers in the basement but no doubt I won’t be able to resist getting more & maxing the board out. (Narrarator: …and no one was surprised) I have a few extra processors from the servers downstairs that I think will fit but I’ll confirm. They’re older, but won’t be under any stress with the NAS anyway.

For now, I’m going to use a few drives I already have on hand but I will be getting more. No doubt they’ll be WD Reds but the size will depend on price so we’ll see how that goes. The only thing I’m still not 100% sure about is the power supply. Still working through that & open to suggestions.

What’s that you say? What about a case? Bwahahahaha! That’s the best part!! And you’re gonna have to wait!

I’ve meant to do write-ups about my network, setups, builds, etc… for a long time but just haven’t gotten around to it. In fact, it’s been so long that Michael has stopped asking about them, so you know it’s been a LONG time. My goal is to update this post and answer questions as I go. I’m also open to any & all comments or suggestions so feel free to reach out.

BC (AKA: Tech Santa)

I’m sort of in the same boat - I’m finally having time to configure my office setup after moving over the spring. I’m also trying to figure out what to do with my FreeNAS box.

I have the FreeNAS Mini XL from iXsystems. 8 core 2.4 ghz CPU with 32GB of ECC Memory.

My goal is to use the smaller set as a staging area for stuff (send all the house computer backups to it, etc), and the bigger set as a ‘master’ set with main copies (after I’ve vetted that yes, that is the copy I want, etc, and also all my media storage).

I’m thinking about using either Jails/Docker/VM to have a Linux instance running so that I can use python (I’m wanting to teach myself python) to go through the files, (especially music) and verify I don’t have copies already, etc.

I’m also thinking of using it to host an in-house web server (not public facing - just being a nice interface for some basic web app stuff I want to write with, again, python).

I’m also thinking I’ll need either NextCloud or SyncThing or some other similar items, as well as either Plex, or just a media server for Kodi.

I guess I’m looking for some other ideas, as well as how to proceed - I’m sort of paralyzed with indecision on where to go from here!

What does the DLN think?

Sounds like a great plan! I have a hypervisor (XCP-ng) in my rack so I haven’t ran containers or anything on FreeNAS in years but I’ve heard it’s come a long way in the last few versions & works much better now.

I’ve ran SyncThing in the past & it’s fantastic for keeping data in sync across devices. However, I now run NextCloud to do the same thing as well as additional functionality that it provides. Plus, it’s easier for my family to use NextCloud instead of SyncThing as they move to it from GDrive.

Motherboard has made it in & actually looks pretty fantastic. I still have to dig through the CPU box & get it tested, but so far, so good! 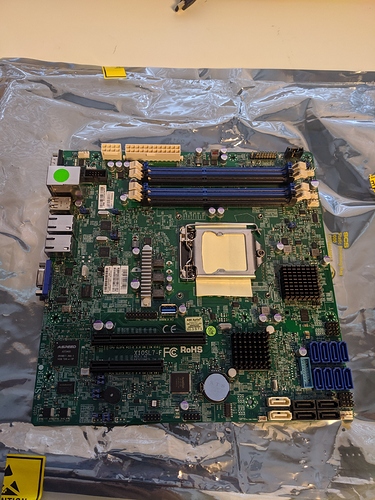 Next up: Order the “case”… lol y’all are gonna love this!