What do you think is the best file manager in Linux? Dolphin, Files, Caja, Thunar, something else? and Why?

I think the title says it all… I’m wondering what people’s favorite (or their opinion of the best) file manager for Linux is!!

Right now, mine is Caja, but that would be because I haven’t used anything else seriously in 3+ years.

Double Commander for me because it is cross platform and I interact with 3-5 Windows computers, and half a dozen Linux on a regular basis. Config is a simple xml file that I can just grab from a web drive any time I install on any computer I’ll spend time with.

But I use Thunar because it’s part of XFCE and I’m pretty happy with it. Years ago when it had less functionality (or perceived functionality at least) I tried out a few different file managers, and often used to install Nautilius because of the plugin support.

Others like Midnight Commander always looked too outdated to me and I never wanted to use my filesystem like it was an FTP site with split panes and so forth.

Agreed. Dolphin for me too and for essentially the same reasons.

Same here + that it doesn’t have to waste half your screen with big fat ugly folder/file icons.

Thunar is great especially if use Xfce or something like a window manager. One of the greatest features is adding the thunar-media-tags-plugin.

Caja is also great, it is the good old Nautilus when it still had all the features Gnome 3 removed, especially two panes hitting F3.

I too like Thunar, @vinylninja. It has built-in davfs2 support (for connecting to Nextcloud files, albeit it’s a bit tricky to initially set up), plus I think Thunar’s use gvfs is considerably faster when it comes to SMB file sharing, compared to KDE’s “KIO slaves” (~75% as fast as GVFS). At least, gvfs was considerably faster, last time I checked (in Feb. 2019).

Dolphin for me, too.

Although, I never had any issues using Thunar before I converted.

So I suppose the question is, are you fine with pulling in most of another desktop environment to get it’s file manager? Installing Dolphin to try it out would require me to add another 200MB-ish of KDE framework.

Now if you told me that a file manager allowed you to queue or pause file copy/move operations then I might be interested. That’s a feature that no file manager I’ve used does. It tries to do them all simultaneously and if you realise you need to use a drive for something but a huge move is happening you are kind of screwed for a simple way to pause that in a GUI file manager.

Nemo has the most complete functionality for me. I like Dolphin too, but I can never get it to play video files from SMB shares. From what I’ve read Dolphin doesn’t pass the password on to VLC for the share, only the username.

I’m a fan of Cinnamon and Plasma so either Nemo or Dolphin. They are similar in capabilities although I give Nemo the slight edge for admin capability.

For me it’s not so much thinking about pulling a file manager in to a different DE, but maybe switching DE’s based on the File Manager, as, to me, that is the single most important app that isn’t free standing (I can install important app X on pretty much any system, but the file manager is pretty ingrained in the DE)!

What does Nemo provide that Dolphin’s admin capability does not?

For me it’s Thunar just for this capability and it’s default in Xfce. It’s easy to use, convenient and has the feature set I need. 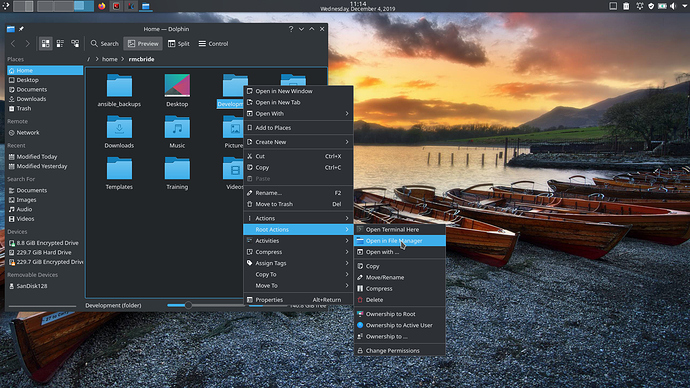 Works for me with no issues. 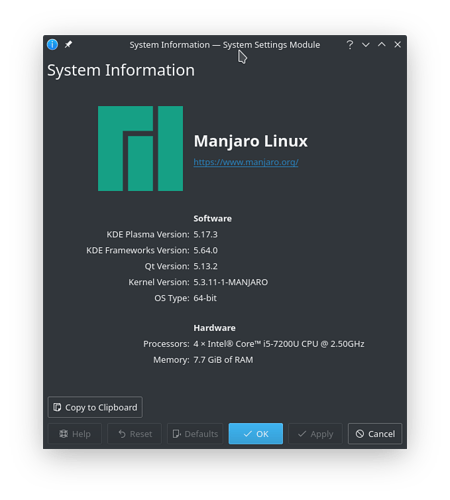 Configure a custom action from the Edit menu, set command to be pkexec thunar %f and set appearance condition to be ‘directories’.

Maybe there’s a better way but I only just tried to do it.

It looks like Manjaro comes configured with the Root Actions service menu installed. You won’t see this on other distros to my knowledge. I believe these are seen as workarounds that are necessary because the KDE team removed this option from Dolphin due to security concerns.

Ah, I see. Well, I’m very new to KDE. I’ve been a die hard Xfce fan for the past decade. But even I can learn something every now and then.

Not that it matters, but I use the terminal more than anything else.