I recently managed to get a small wifi router appliance where I can run OpenWRT firmware:

After watching this video: https://www.youtube.com/watch?v=hheHoBV9GXw I had one of those “shut up and take my money” moments (to buy this product), and in short order, one of the last units from Mouser was ordered. The price was a little higher than I would have liked, but I felt it was still worth it anyway, due to the rarity of stock. It comes with OpenWRT installed in the 32GB eMMC on the included CM4 board. I like how it’s a comprehensive kit. That’s worth something to me. 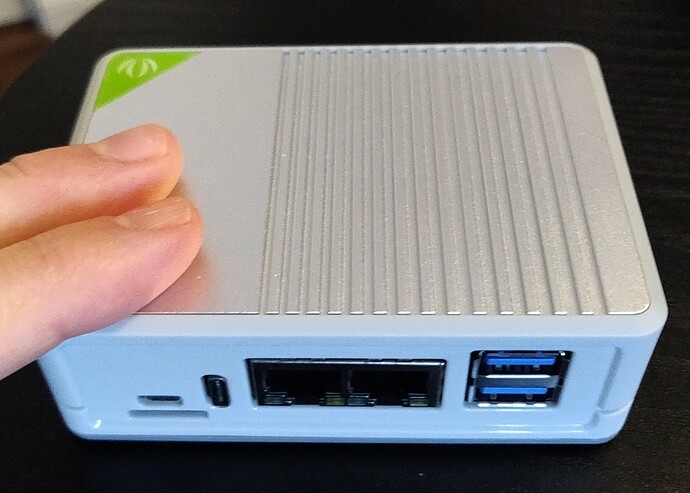 In OpenWRT, you can install many more Open Source packages. I installed netdata and tcpdump.

Here’s how: in OpenWRT’s web interface, I went to “System” → “Software” → click “Update Lists” button (then wait). Then in the “Download and install package:” textbox, one at a time I entered “tcpdump” and “netdata”, clicking the “OK” button each time, awaiting installation.

Then I connected my Android phone to the OpenWRT router’s wifi (the network interface name for that, inside the router, is “wlan0”).

Note: This OpenWRT wifi router is connected to an “upstream” router (the house’s main router, as supplied by the ISP, which does not run OpenWRT) by an ethernet cable connected to the leftmost ethernet port pictured above (which is the “WAN” port).

I can watch the Android phone’s traffic going through the wifi router somewhat by doing the following:

Here’s a screenshot on my laptop of watching both netdata, and tcpdump, side by side, while my phone visits a website (and creates real-time activity seen by netdata and tcpdump):

Screenshot of Netdata, and tcpdump

(I couldn’t upload the above image, or Discourse would freeze on the “Processing the Image”, as it’s 1920x1280)

OpenWRT router’s wifi (the network interface name for that, inside the router, is “wlan0”).

This interests me. How are you adding wireless to the homemade OpenWRT router? Lurking around other router project forums like pfsense and opnsense and the general wisdom seems to be to purchase and use an external AP instead.

This router comes with a CM4, which has wifi onboard. OpenWRT uses that wifi as a wireless access point by default.

“Network” → “Wireless” → “Edit” button → scroll down to the “Interface Configuration” section, choose an Encryption type from the “Encryption” pulldown, and set a password in the “Key” textbox → Click “Save” button: 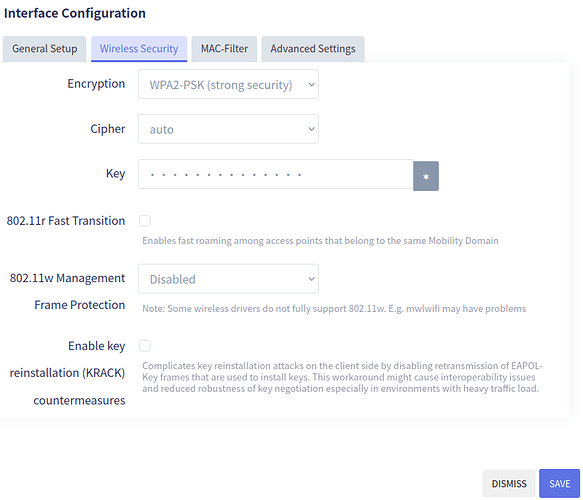 The wifi on the CM4 is weak sauce, for how much bandwidth and signal strength it is capable of. But it’s good for these diagniostic purposes, analyzing one phone at a time (connected to the ESSID you create in this router appliance).

Cool cool. I’m now wondering if the advice on the other projects is due to more of a BSDism or poor WiFi driver unavailability.

You can set the ESSID of your choosing under the “General Setup” tab, in that same “Interface Configuration” place: 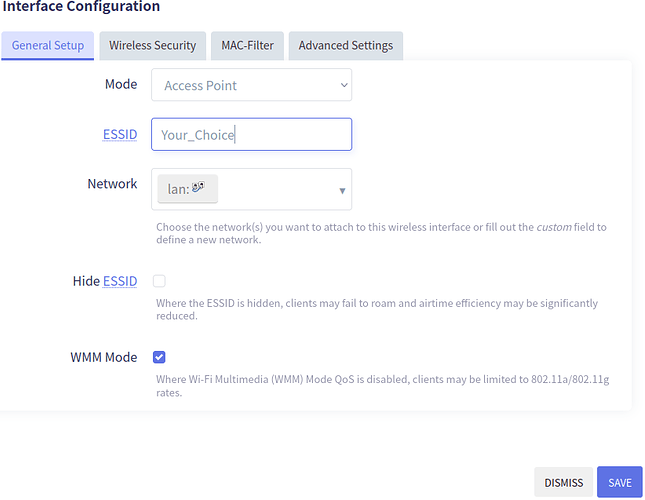 In order to save the output of the tcpdump command in a text file, for later analysis, here’s how I did that.

I have a USB stick with a single VFAT partition on it. I plugged this into one of the router’s USB3 ports. This automounts on the mount point “/mnt/sda”.

My tcpdump command became fancier, so as to also save the output to a text file:

When I was finished, I unmounted the USB stick safely with the command, before pulling it out of the USB3 port: