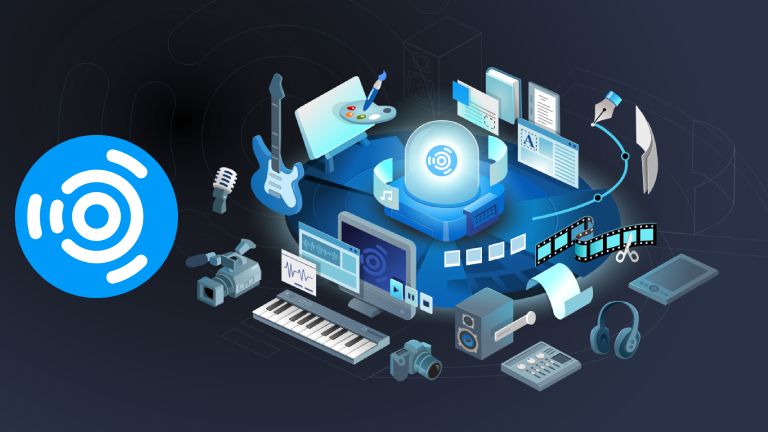 This tutorial is a follow up on my previous article Ubuntu Studio 20.10: Is It The Perfect Linux Distro? In the first article, we looked at all the major changes in Ubuntu Studio. There was a lot to cover already and I quickly realized there was no...

Excellent info. One can get in the tall weeds with this stuff rather quickly. You have done an excellent job in making a clear presentation. This helped me.

This is a very useful tutorial for me. Thank you for putting it together.
I would love to see an updated version that would reference the 22.04 version with the “Studio Set Up Utility” version of 2.3.1 or above.

I can’t get the “Headphone plug in Action” under the “Extra Devices” tab to save my preference. It reverts to “Switch output to headphones” every time I quit it.

What about those of us on Ubuntu Studio 20.04 LTS. I cannot find the link, but it was mentioned that upgrading would be too difficult because of the move from Xfce (20.04) to Plasma. Is this still true?

I ask because the intention of running Studio release is to not have to make major changes… as far as I’ve understood it.

Is this still true?

Yes. The current pseudo-official wisdom is to first install xubuntu and then use the Ubuntu Studio Installer. 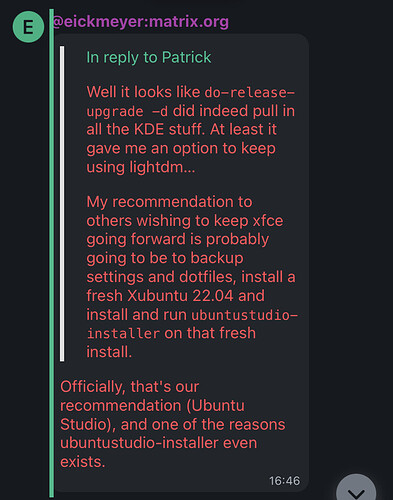 Thank you for this info. I will be upgrading US to 22.04 in a couple of months – but don’t want to leave XFCE.

but don’t want to leave XFCE.

So, what would be the best course of action for those of us on Xfce-based Ubuntu Studio? I have not seen any documentation for best method to nuke and pave over to the current LTS.

Upgrade is not supported. If you want to keep XFCE you can do a fresh install of Xubuntu 22.04, then install studio installer from software center, or via terminal

It will guide you through the steps and you can choose applications you want from those pre-installed in Ubuntu Studio. I have a tutorial on Front Page Linux based on Ubuntu Budgie.

It is a bit older version but installation procedure is still the same.

Thanks, in that case I’ll make a plan to install the Plasma version in order to be on the standard Ubuntu Studio LTS again.

I’ll need to find any documentation for restoring and migrating my existing system settings / files. I’ve kept daily backups in Timeshift. My intention with this system is to get work done and avoid downtime, but totally understandable if a scratch install is mandatory. Any documentation suggestions appreciated; I’ll link anything I find back here.

So, what would be the best course of action for those of us on Xfce-based Ubuntu Studio?

I don’t know that this is the best – but here is what I do. I start fresh on each new LTS (every two years). Here is what I typically do:

This year I will be adding a few steps:

I keep the old SSD around for a few months to see if there is something that I need off of it. Then I generally put it in a laptop or desktop for a family member.

Thanks for your steps. This has me wondering if I’d be better off moving back to a rolling release.

Before I installed Ubuntu Studio I was using Arch and Manjaro for many years with no issues. Since that requires less major maintenance I’m realizing that Ubuntu still doesn’t make sense for me in place of regular backups and gentler, rolling updates.

I’ve also heard very positive things about Fedora for studio usage, but have yet to try it.

better off moving back to a rolling release

In all the years I’ve used an LTS, only once have I needed to resort to a developer ppa to get the latest feature on an application (ffmpeg). (Which is kind of ironic when you think about it). So, I don’t think a rolling release is necessary for me.

I wish I had time to do some exploration and distro hopping. But with my schedule I need stuff to work to get stuff done. Ubuntu Studio has made that possible; so I never looked right or left.

Back in the day, the hardest thing about US was the manual install of Nvidia drivers. But even that is automatic now days.

So, I don’t think a rolling release is necessary for me.

The point of the rolling release is simply never having to reinstall.

It isn’t necessary, but it is for this exact pain point. Every method has positives and negatives. Ideally, we use a distro that works for us.

I agree with you. Different distros take different approaches. Even within the rolling distributions there are quite some differences.

I like Ubuntu and Fedora because those potentially dangerous changes, only happen at predictable time. Very easy for me to set aside some time and do release upgrade. On a rolling release, I can’t predict when this happens and I am not really willing to risk my production machines when I don’t want to. The exception here is Tumbleweed. Tumbleweed is amazingly stable, and has snapper that allows me to just roll back to a previous snapshot from GRUB.

One thing I want to point out about Ubuntu Studio and Ubuntu or Fedora in general. No need to reinstall to upgrade. I have upgraded a few Fedora machines for many, many releases without ever breaking them. The trick with Fedora, in my opinion, is wait at least one month after new release is out, then do the upgrade.

Ubuntu LTS upgrades are even easier. Because LTS users are prompted to do a release upgrade only after the first .1 of new LTS is out, 6 months after a new LTS is released. This is done on purpose to ensure great stability and smooth experience for LTS users. For example 20.04 LTS users will be asked to upgrade to 22.04 only when 22.04.1 is out, in August.

In your particular case, you will need to reinstall but only because Ubuntu Studio switched from XFCE to Plasma. This is not something that happens often with Ubuntu flavours.

In your particular case, you will need to reinstall but only because Ubuntu Studio switched from XFCE to Plasma. This is not something that happens often with Ubuntu flavours.

What you wrote is ironic.

One thing I want to point out about Ubuntu Studio and Ubuntu or Fedora in general. No need to reinstall to upgrade.

Because I am forced to reinstall.

It is what it is. Haven’t tried Tumbleweed or OpenSuSe or anything yum. So many choices!

Also was able to completely remove snapd and avoid having to use it altogether. Firefox is still exactly as I had it.

There also is another option if you want to look at it.

AV Linux is now based on MX Linux using XForce desktop by default.

MX Linux is from the same folks who brought you MEPIS Linux, before Ubuntu got so popular.

Also based on Debian, which while not a rolling release on the stable branch, does provide a solid update procedure from one release to the next.

MX Linux Customized, Molded and Shaped for Content Creators.. The multimedia content-creation focus AV Linux has provided since 2008 is now combined with the powerful versatility of MX Linux! AV Li…