This is the problem.

I get mails from my energyprovider, for instance with a link so i can download my bill or some other.
When i click on the link it opens Firefox, (Newest version, downloaded and installed from the site) but nothing happens. It’s a blank firefox window. Accesing the preferences for instance, won’t work either in this particular window.
What does work is this; if i open Firefox first, and then click on the link in the mail, everything works just fine.
I had a look in the preferences of Firefox but saw nothing that wasn’t there before (no new options i could see).

Anybody got an idea where this comes from? Or is this a growing pain of a new version?

Sounds strange. But anyway what is set as the default browser on your install?
Also check your command because you installed Firefox manually. Does it open like this:

That means that whatever you want to open in a browser tab in Firefox, like a link, will be opened in a new browser window. Though it might be unrelated.

Thanks for the help.

The command opens a new firefox window, so that works.
The browser is set as default.

This is strange indeed, because i never had this problem before on any other os i used.

I was thinking along similar lines as @vinylninja

It sounded in the initial description that you are using a separate email client, rather than a web-based one. (Thunderbird/Evolution/Geary/etc. etc.)

Is there a setting hidden somewhere that handles which browser is default, etc. etc.?

Oh yes, i’m sorry i didn’t mention that. I use Thunderbird. (With a protonmail bridge).
I’ve went over the settings in Thunderbird/Firefox prior to creating the topic, and nothing seems out of the ordinary. Nothing that wasn’t there before.

It’s strange behaviour which i haven’t encounter t yet in all these years of using Mint.

Anybody got an idea

Have a look under the hood with this command while FF is sitting there doing nothing:

When you’re in there, I would snoop around and look for errors or look at the waterfall (under “Network”) to see what is stalling the process.

Thanks for the help!

Unfortunately, it doesn’t work. The inspection window won’t even open. In another instance of the browser, there’s no problem.
I removed Firefox and my profile along with it, installed firefox from the software repo’s, hoping that might solve it, but no. Same problem.
I found out that the menu still works. Here’s a little screenshot of the error messages. (around 22 of the m). 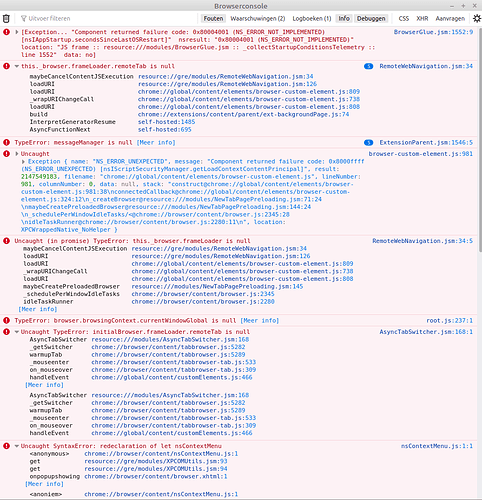 Maybe this will help.

The error code “this._browser.frameloader.remotetab is null” shows up in a search for problems with Firefox. A couple of entries seem to point to something called “FireJail” – but I have no idea what that is. Perhaps Firefox is being isolated and not receiving the initial data that is needed to hook to the desired site. (Just kind of thinking outloud.)

Does it happen to almost every email link, or just ones from certain email addresses?

@MarkofCain thank you for the help. I’ll take a look.

@jastombaugh this happens with every email link. It doesn’t matter what the source is.
Thunderbird is indeed version 91.5.0

New fun. I just found out that i can’t open the downloadfolder from the browser, after downloading a file.
I need to navigate to the folder with nemo. Opening a file works.

Just checked and things are working as they should… but then realized that I’m still on Mint 20.2.

Could be a kernal bug after all. Is there a Firefox flatpak we could test with? I know the Mint team was intending on building Firefox especially for the Deb version while many distros were electing for a snap version. Sounds like some bugs could be surfacing?

Yep, i’m thinking along those lines as well. This has to be a bug, since i’ve never seen this behavior before in any of the previous versions.

There is a flatpak version available. I’ll have a go with that one and see what’s what.

I feel really compelled to suggest that you not click on links in emails. Especially emails that lead you to the login screen of a bank/utility co/government service/etc. That is the kind of habituated behavior that makes phishing work.

You should have all your account’s login pages carefully bookmarked and only use those bookmarks to access accounts. JMHO, of course, but you will end up auto-pilot clicking email links and get bit at some point.

Did you check to see if the link works when Thunderbird sends it to a different browser? That way you can eliminate Thunderbird as the culprit.

Yep, in 99% of the cases i don’t click on links and i have the critical sites carefully bookmarked.
It’s in cases i know the sender (mostly family, friends) with things they want to convey. (and even then i’m sceptical/paranoid).
There’s no way i’d click on mission critical links, because like you say, that’s opening up to phishing.
It’s just the first time i’ve encounterd this behaviour.
Thank you for your concern though. Much appreciated!

Ah, haven’t done that yet. Good tip. I’ll check it out and report back.

That sounds like a bug. I remember that Mint changed from Ubuntu’s deb version of Firefox to one build by Mozilla? Could that be related?

Aha! Now that sounds like a possibility to me. I’ve reported my problems on the linux mint forums as well, so we’ll see how this will go.

I’m eagerly awaiting updates. That and the suggestion @tater gave, which i still have to do.