The Wayback Machine - Things we played with before you were born

My first computer bought second hand for $600 in the 1980s – took out a loan, even. With this picture, I launch a reminiscence Topic, @jill_linuxgirl, to share with the youngsters around here. This beauty was stolen from my office way back then.

@Lulu, here is one of my favorite computers from the mid eighties in my collection! 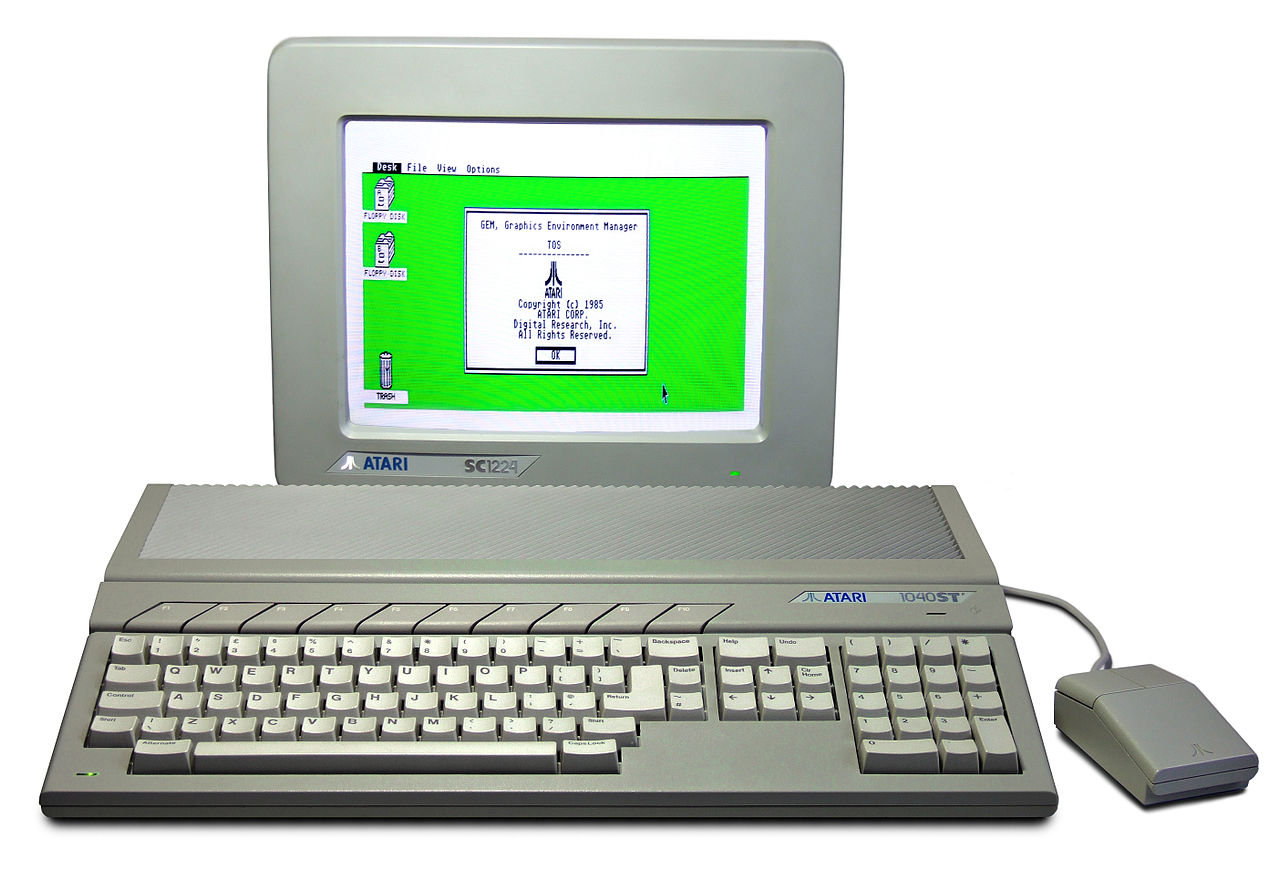 There was a lot of rivalry between ST and Amiga owners! I remember annoying a friend by showing him Amiga emulating TOS

It didn’t run anything major but just GEM was quite fun to see on an Amiga!

Our first was a Commodore 64… what a great computer. Before there was DOWNLOADS there was TYPE-WHAT-WAS-PRINTED-IN-COMPUTE (and make sure its for your computer’s version of basic!

It could take hours to meticulously type in lines of code from some computer magazine or library book, and then more hours to trouble-shoot and debug the typos. I can remember when we finally upgraded from a tape drive to a disk drive.

Computers seemed so much less detrimental to health back then… because you could start your program loading, run out side and play for a few hours, and then come back in to a computer game ready to use while you ‘rested up’ from playing outside.

@ak2020 I had always been fascinated by the Amiga, but never actually saw one in person until this year. A guy I know had one in parts in his shop. The only thing missing is the mouse! He claims it ‘works’, but looking at the mother board, it’s pretty corroded by a leaky battery. I don’t have the Techspertise to clean off the corrosion and solder on a new battery. But if we were to box it up and ship it to @jill_linuxgirl… ?!? Hmmmm.

I sometimes still miss turning on a computer with a physical flip switch and not just a push button.
Not missing CRT monitors though.

I also started with a C64 with a cassette reader

plugged on my father old tv.

The first computer I used, I reserved for say 1 hour/day in 1970, often late in the evening.
A 32-bits Philips P1100, 64KB of core-memory of 1 micro-second. The CPU arithmetic unit was 8 bits and for each 32-bit addition we needed 4 steps of each 8 bits. The CRT was used to display the 16 registers, memory content and addresses hexadecimal. The main frame I used, had 3 HDDs of 7.5 MB each, the line printer, paper tape and punch card equipment. We used it for testing new peripheral controllers and in my case data-communication controllers with hard wired data-link protocols.
Initially I put the program in memory using the keys on the front panel, in a later stage of the testing I switched to paper tape and typewriter with a test program 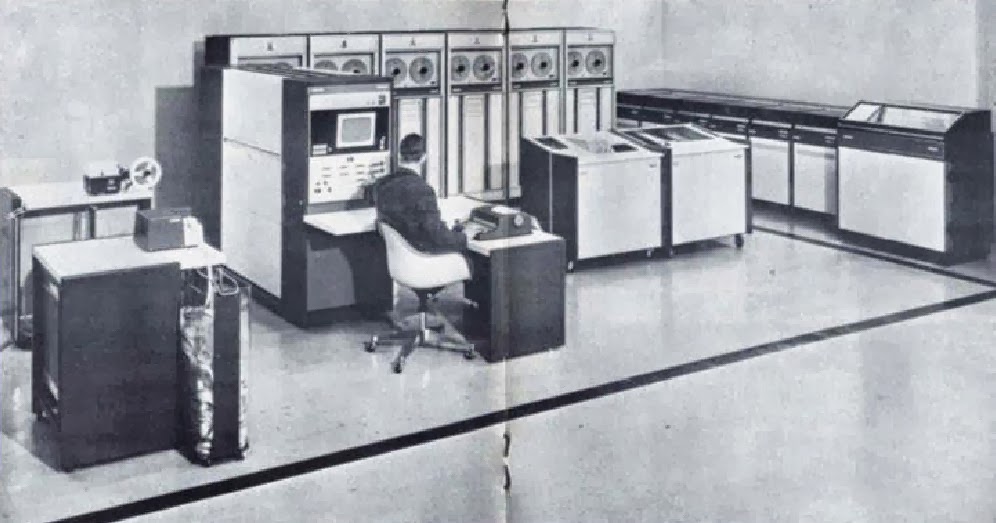 The tape units on the photo were from the USA, later we used Philips tape units and the first production units had the nick name; “Die Zigeunerbaron” (Gypsy Baron), a famous German opera song, starting with the words; I can’t read, I can’t write, that’s not my skill

My first computer, used at school, was an Apple IIe. I played games like Number Muncher on it. 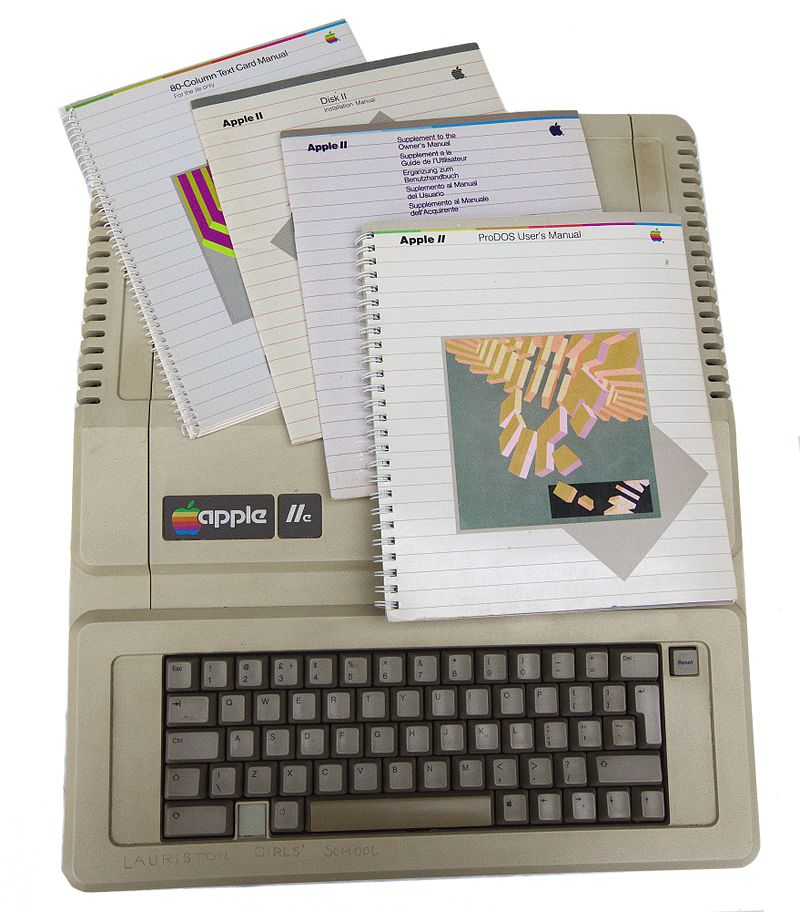 I loathed the layout of the arrow keys, making game-playing hellish. I knew it could have been much more sensible.

You know, it wasn’t until just recently that I learned the ,8 ,1 was sector and track info. I never knew WHY I typed that as a kid, just that it was what I needed to do to get ‘Seven Cities of Gold’ or “Racing Destruction” to load.

(Confession: Sometimes… sometimes I turn the terminal colors cyan and blue just for the commodore fun of it.

you take the cake!

I had a Matrox dual card and 2 Viewsonic crt’s while running Xandros. Awesome at that time

Fall of 1983 - Commadore 64. Played Zork, Sargon (chess), used Fleet word processor, Mirage database, had a C. Itoh 9-Pin Dot Matrix printer, and learned to code. As I spent a significant amount of my time studying and reading Classical and Koine Greek, I “poked” the ram to display a Greek character set I had created with sprites. I accessed CompuServe at (IIRC) $7.00 an hour at 300 Baud (Minimum Wage was $3.35). You literally could watch the letters individually come up on the screen as you read sports and news (A little faster than new crawlers at the bottom of cable TV). 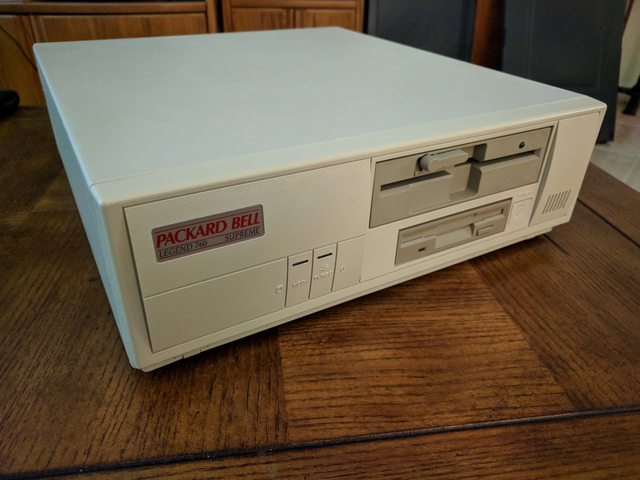 I’m not 100% sure this was the exact model I had as my first “just for me, not shared with the family” computer but it was pretty close. Packard Bell 486SX with an amber monochrome monitor where I learned to program in Pascal. I was about 8 or 9 at the time.

A Packard Bell was also my first experience. My Dad bought it for business and he let me use it often. I started on QBasic and constantly broke the OS while messing around. Playing with autoexec.bat to squeeze out enough conventional memory to play certain games was definitely an experience, one did not simply “Internet search” for answers back then :P. Those days were a source of endless wonder.

Man $7 us pesos for an hour ? I bet you could get $ 8.25 at a SC comp USA today !
That PB was the correct design for a “desktop” machine. This tower crap is garbage.“Look mommy. 14 different colors of flashing thingamabobs ! COOOOOL.” 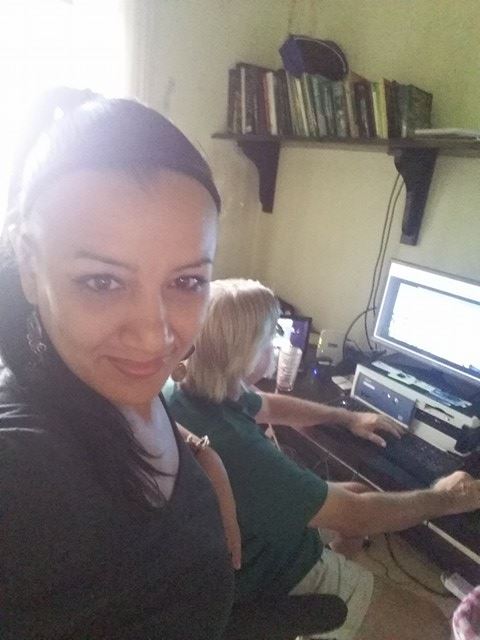 Anyone want a Macintosh Lisa?

Oh, there was rivalry, I remember it well. My first computer was Amiga 600, my best friend had Atari ST, we could argue for hours which one was superior. I still got Amiga and ST roms stored in my Linux machine. Recently, I started to play ‘Perihelion: The Prophecy’, a sort of cyberpunk RPG from 1993. For some reason I never finished it some 25 years ago, so I decided now it is a good time to give it another try