Let me begin by saying that my default/primary web browser is Firefox…no question about that…both to support FOSS but most especially for privacy and security…However, I’m going to begin using software (for my kid’s school) that I believe requires Chrome web browser to run ideally [0]. So, does anyone have a suggestion as to which of the Blink-based/Chrome-off-shoot browsers I should consider using? I use MS Edge at my dayjob (because its either Edge or Chrome), and its ok, not amazing but not terrible. I hear that there are other browsers like Brave, Chromium, Vivaldi, etc…

Thanks in advance for any suggestions!
[0] = Its very possible that this software may not 100% require Chrome…but i’m not the kind of person that likes to scarmble to find a solution at the last minute…so doing my research here in advance, in case the software doesn’t work with my instance of firefox.

I would push for them to demand to support other browsers. Google owns the Chromium browser, and it keeps gaining steam. If it gains too much control, Google will have total control over the web.

There are definitely times when certain apps (video conference apps as an example) require Chrome base. If a client or school app requires it there isn’t much you can do other than comply. Though I do like to send requests to app makers to add support. My recommendation is ungoogled Chromium. It’s a specific branch of Chromium that has Google services taken out. It’s in the repository for Garuda and I believe the version of Chromium inside Fedora is also ungoogled.

If that doesn’t work for you than Brave would be the next best choice.

+1 to DasGeek, ungoogled-chromium is what I use as my Chrome alternative. It’s minimally invasive in terms of development and the defaults don’t send your data to Google.

For Fedora the pre-packaged version of ungoogled-chromium is available from the OpenSUSE repo:

If you want browser extensions you need to follow these instructions, this problem was created for Chromium recently by Google. Once installed you can just install extensions as normal. 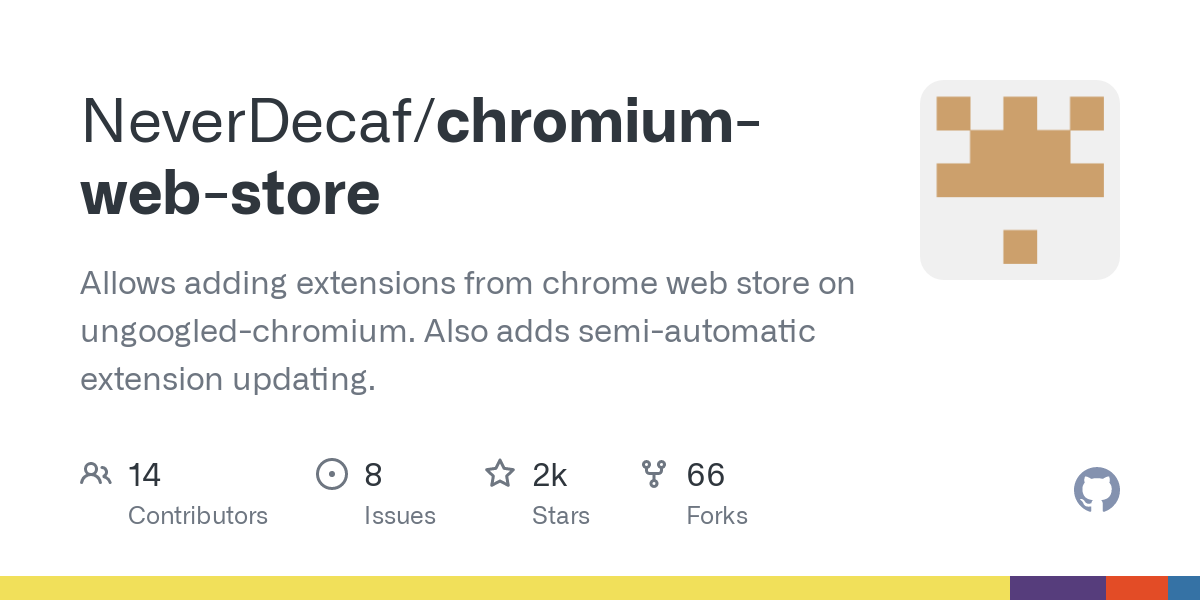 I’ve also had no luck viewing Amazon Prime videos or YouTube live streams though it works perfectly with everything else I use. Not sure if i’m an isolated case or if this is a chromium problem in general.

I set this up with flatpak this morning based on this thread.

Yeah, i’m with you! I’m just exhausted of being the only one (or on rare occasion the second one) in a room of tons of other parents who don’t give a crap. (I end up sounding like the healthy eater supporter who tries to fight for better school lunches with no other parental support and just crickets from the school admin side, etc.). So, yeah, the right way is to push for change…but right now, i just lack the bandwidth for fighting on multiple fronts.

Oooh, i didn’t know ungoogled chromium even existed; thanks!!!

Awesome! And thanks for the dnf line (I am running fedora now currently too, so this is perfect) as well as the “gotcha” around extensions!

Edge browser is based on Chromium now. But I would probably save Chrome is not available on our computers and ask for something else to be done.

As far as alternatives again this is 100% personal opinion. I am with @dasgeek I would recommend trying ungoogled Chromium. Personally, for me, I would recommend Vivaldi if you are looking for the best Chromium-based browser that does not run into streaming services issues etc.

Most of the code is open and the stuff that isn’t generally from all the documentation I have been able to find about it the 5% or so that is closed is UI oriented. They have their own syncing service so their is no reliance on Google. They have partnered with DuckDuckGo for their built in tracker blocking. and private tabs default to DuckDuckGo as the default search engine.

I know many will say to use Brave, but the way they have handled their PR and other things around Brave as a company makes me hesitant to recommend it. IE not paying out content creators who have been paid by people via their brave crypto/ rewards initiative. The way they do ads (rip out site ads put in their own)

Some other recommendations to try would be Ghostery Browser, and SRWare Iron

I’m going to add my vote for ungoogled chromium. It’s what I use for a few things. I prefer FF, but somethings flat out don’t work (I"m looking at you webex).

I also have used Vivaldi in the past, and found it quite nice.

I wonder why nobody asked what software it is that you need for the school because you said you believe it needs a Chromium based browser?

And yes I understand, school is school but I would at least try to question that choice.

If I had to guess, Chrome is listed as the “recommended” browser, and that’s always going to be the first suggestion from any kind of support standpoint. “I’m not installing chrome” will likely be met with a less than ideal response.

Being as it’s for a school, I’d guess we’re looking at something in the g-suite, blackboard/moodle, etc. Probably little to no software written by the school, all vendor supported stuff and all the vendors are going to say “we don’t support Firefox”. It’s a crap situation, but it’s not likely a battle a parent/student is likely to win.

If I had to guess, Chrome is listed as the “recommended” browser, and that’s always going to be the first suggestion from any kind of support standpoint.

This plus if the software “just works” on Chrome without configuration (WebRTC looking at you) than they aren’t going to bother supporting other browsers. There is no point in opening the tech desk up to a glut of issues to support a browser that comparatively isn’t being used so it’s easier to just not support it.

I also believe Ungoogled Chromium will let your kid complete their assignments without sacrificing any of the browser privacy you’re familiar with.

If you want to shoot the school a letter asking them to reconsider then feel free to do so but please don’t let your kid’s learning experience suffer because of your software freedoms.

My bad, i originally stated software, but should have stated “web apps” that are for school purposes.

Also, I appreciate @SquirrellyDave mentioning blackboard/moodle…while it isn’t either of these, @SquirrellyDave is correct in this is the type of thing that i was referring to. My kid’s school district uses Microsoft, so i know that works fine on firefox, it is these other apps (like blackboard, etc.) that i have fears about. I try to instill software freedoms into my kid, but of course can not afford to have them suffer less of a quality of an education because school districts make either uninformed decisions, or just don’t care with some aspects of their tech stack. Regardless, i think i have some good options now; thanks!

Yeah, i think there’s been enough votes for ungoogle chromium that i will certainly give it a shot. And, agreed, as much as i love software freedoms, i don;'t want my kid to be negatively impacted by choice of others (like school district, etc.). Thanks again!!

I try to instill software freedoms into my kid

To this, I was speaking more in general. You might be happy to know that, in this specific instance, Ungoogled Chromium is Free, Libre, and Open Source software licensed under the BSD 3-Clause License which is a Free (Libre) software license, even one which is compatible with the GPL.

If I were to go with ungoogled chromium, I’d compile it myself. The project’s download page has quite the caveat:

(sorry, prevented from including the linky)