[SOLVED] Any way to make a full clone and/or image of mounted running drive? (running Ubuntu 21.04)

I’m using Timeshift to take regular daily system snapshots and that’s working great. But I also want to make full images and clones without unmounting my main drive and without booting from a live USB stik.

I read about something called Continuous Data Protection (CDP) and Linux Hot Copy, but it seems they only work on Linux/Ubuntu servers.

dd is an option but will have difficultly in cleanly cloning files that are simultaneously being modified on the original.

The difference between desktop linux and server linux is not that much. It would likely work just fine.

VSS has a lot of complicated scheduling so that it doesn’t make copies of open files, instead it effectively closes the file, makes a copy, then reopens it in a way that the user doesnt notice.

The closest thing I can tell is BTRFS snapshots or LVM. But what do you mean by “clone” do you mean a byte for byte copy of the whole disk?

Check out this tool and see if its anything like what you want: https://rsnapshot.org/

OK, I think FSArchiver may do what I want. I installed fsarchiver and now I need to install the GUI which is qt-fsarchiver. See pic below. Which file should I download and install for my AMD Ubuntu 21.04 laptop?
.
. 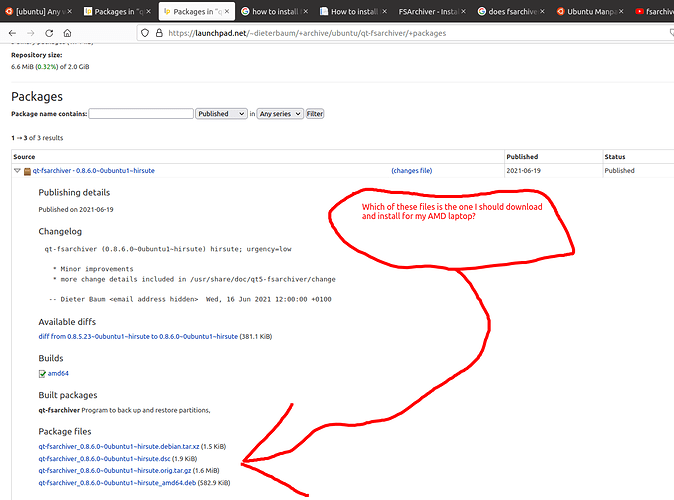 The one on the bottom – amd64. FYI the “amd” in “amd64” designates that it is 64 bit and not that it is for an AMD processor (it also works on Intel CPUs)

OK, thanks. That’s what I thought but, as a Linux newbie, I’ve learned the hard way to never assume.

I’ll get it installed and see if fsarchiver actually works the way I hope it does. I’ll report back.

Check out this tool and see if its anything like what you want: https://rsnapshot.org/

Good tip. I’ll read thru the docs. Thanks.

I finally got FSArchiver working to make a clone of a mounted and running drive. It’s working good.

Could someone mark this thread as resolved? Thx.