Thanks for the input. I don’t run any containers at the moment so that’s no trouble for me. I found a third party plugin for managing samba shares and permissions that worked well. Cockpit is pretty extendible if the plugin exists.

Woke up today to having a muted icon floating around on my desktop on both monitors. Hmmmm.

My sound is piped out to bluetooth speakers in the office. That system was NOT muted. What?!?

I updated the system yesterday. Did it include any updates to the sound libraries? No.

Maybe this is related to a browser? Nope. Videos play with sound in all browsers.

I gave up and had to leave for “real” work. While I was out, I had the thought that I need to look at the PIDs that are running and I will find the culprit.

I stopped by my desk in a couple of hours and noticed that the screens were blank (expected experience) but the icon was still floating around on the blank screens. Ah Ha! I then had the idea that this is a monitor icon not a system icon.

Sure enough! The monitors I use have built in speakers that I never utilize. Somehow, they decided to start showing the muted icon. Problem solved. I was reminded that effective troubleshooting involves a step by step walk through of EVERY contributing system.

This week I’m taking some baby steps learning podman. I’m one of these crusty curmugeons who doesn’t want to have to learn a whole new operating system - which is what the linux container ecosystem effectively is.

I feel like this is the late 90’s again. Does anyone remember how dodgy the website rpmfind.net was back in the day? To find super janky .rpm packages, which might have come from any one of 10ish Redhat knockoff distros? Finding containers are like that: a janky wild goose chase around different sites which tease you into believing you can download containers from them without being subjected to torture.

For example, where could I download a Heimdall container?

Finding containers are like that: a janky wild goose chase around different sites which tease you into believing you can download containers from them without being subjected to torture.

For example, I get this 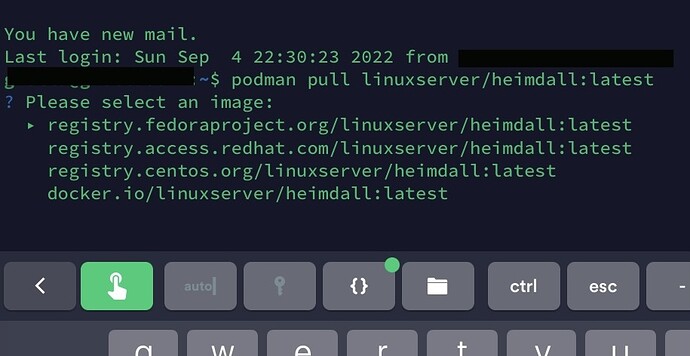 You apparently need to edit your registries.conf file.

Despite the security benefits of podman, I used docker instead because it just worked, as the documentation said it would.

Even better yet, running heimdall natively was like 20x faster than inside Docker! I installed it natively following these instructions I wrote.

This week I learned a new wireguard-management utility called “innernet”.

Once I played with innernet enough to understand how it worked (and the first couple of experiments didn’t go all that well, but hey, that’s how you learn), I got a little bolder and set up a rustdesk relay inside the wireguard-encrypted subnet which innernet sets up for you:

Any users of rustdesk? Watch out for unsafe defaults Privacy / Security

I wanted my own rustdesk relay not to be publically-usable. After setting up an innernet server on a VPS, I can run the rustdesk “ID server” and relay server inside the wireguard tunnel (bound to the wireguard ip address of the innernet service/network interface), such that rustdesk clients connect to these only (which is to say, all rustdesk connections are encrypted with wireguard). On the VPS: sudo ./hbbs -r [innernet-server-ip] sudo ./hbbr Note: The rustdesk binaries for running your own…

Got my new Steam Deck 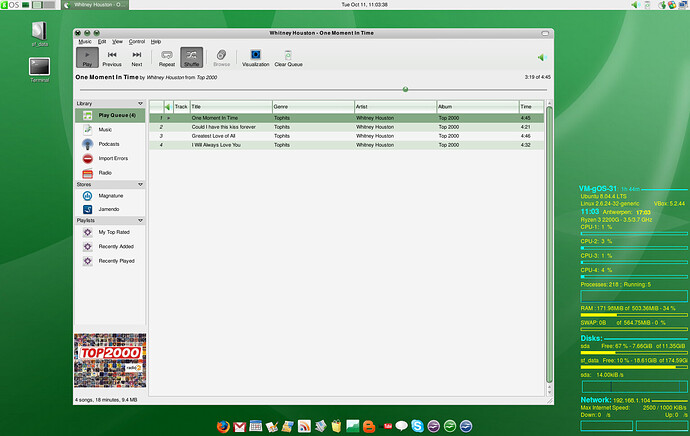 I remember I used it in 2009 on a netbook. I really loved it. I have spend one full day to get a good working Virtualbox VM. I had to do a lot:

I’m still have to clean up the dock and I need to find a usable browser, since the installed Firefox 3.6.17 does not support https and is thus useless. I tried an Appimage, but that one was looking for xz decompression and Ubuntu 8.04 has no working support for it. I did find a xz package, but that one did give me the notorious Linus warning, if you want to install it, you have to type: “Yes, I want to install it!” I took a VBox snapshot, but after the risky installation nothing changed

After rolling out Heimdall web dashboard to my organization (having about 20 users), since I did a non-traditional install - not in Docker - I posted a writeup on this (Debian 11 + nginx) installation method here.

Dealing with the aftermath of hurricane Ian. Redirected funds I had hoped to put into a new system to buy a generator and find housing for people who didn’t fare as well as we did. This is a temporary setback for us but not devastating like for some of our friends who live South of us.

Survival can be low tech. But I learned a lot about generators vs. inverters. I definitely need to buy more battery UPS’s.

How do you like this compared to say the Switch?

With Fedora 37 coming up soon I thought I’d try out the latest Ubuntu on one of my machines. Well I am going to wipe it to put 37 on there anyway. Booting off the usb drive it just showed the splash screen. I left it for ten minutes, twenty minutes then turned it off. I guess ubuntu didn’t want a chance to live on there for just a week, my guess its that it probably knew that it would be wiped pretty soon and threw a hissy fit, It still hasn’t forgiven me for not using it since 11.04. I can’t say I am personally affected by the whole thing.

They’re 2 different devices. I still have uses for my Switch lite, and one thing I miss with it is that it’s so much easier to carry it if I need to, say get up and leave the subway.

On the other hand, I have more games in my library than Switch games (which has been reduced to be my Pokémon console).

Had a bit of a rough go with my server a few weeks back. One HDD was throwing lots of errors and no amount of fsck would fix it. I knew this day was coming since I put this server together as a playground to try out new things out of spare parts and the drives were dubious to begin with. I pooled all the drives together with LVM, which I’d never done before, and once I added the new SSD to the pool I could move the contents of the bad disk to the rest of the pool with a few simple commands.

During the process of formatting the new drive I accidentally wrote a new partition table to the wrong disk… the boot drive. Since the machine was still running the old partition information was still in memory and I could use that information to recreate the partitions exactly, and UUIDs, and save my horrible mistake. I was somewhat shocked when it actually booted like nothing happened. I learned a few new things from that experience.

I recently acquired an industrial PC to play with. The purpose being to replace the aforementioned server, which is really just an appliance running Jellyfin and some samba shares. Since it’s fairly low power and passively cooled I can put it in the garage/workshop and not worry about dust. It also is much smaller in size. I’m trying Fedora Server 36 on it, which is new to me, and so far Jellyfin is kinda broken on Fedora 36. Ideally I would replace the drive with a much bigger one and then recreate the setup with Ansible and figure out how that works. Should be fun.

I used LVM back in the 90’s when I was running HP-UX on a mini computer at work. As I recall, it always worked very well. Noah Chelliah is about the only other one around here that I recall recommending LVM on the regular.

I thought about running it here on my home lab but part of me is resisting the plunge. I have storage issues which have necessitated me to rethink my current arrangement. I just ordered a 12T drive last night to alleviate the crunch from 2 x 4T drives that are FULL and allow me some time to rethink this setup. Maybe I should consider LVM…

I’m running 11 year old hardware on the MB and I would really like to get up to date on the main system as well.

Tired of using my 2016 MacBook Pro at work (working for VFX studio for about 5 months now), so I learned how to put a Linux machine in the Active Directory.

Our thin clients by default are on Ubuntu 20.04 and was setup using Ansible by my mentors/senior Sys Admins. I didn’t wanna do anything yet to update to 22.04 just in case, but I decided to setup my own with KDE Neon 22.04 with Liquorix kernel. So far so good.

Few steps closer to learning how to make multi-domain work.

Installed another 12TB into my desktop.

I have 64GB on my laptop and rarely even get to 25% of capacity on it. How would you utilize 12TB on a desktop, real question!

Sorry for the confusion. I should have said 12 TB DRIVE. Not RAM. LOL. That would be a lot!

The reason I have so many large drives in this desktop is that it functions as a server in my “homelab.” One of those functions is a media server. Plus I tend to be a data hoarder.