Edit: I’m not going to poop all over such a nice thread with all my opinions. If the correct time and place shows up, I’ll give them again.

I’m making myself my homepage in python, django. It’s going nicely. I even catch myself starting work with one small change in mind (as I do it after day of programming in work), but ending up adding more.

I like it much more than web development in php (Wordpress, Laravel).

Interesting. I have no proverbial horse in the race, so who would you recommend as an active FSF-friendly daily driver?

I’ve been using Parabola for two weeks now and it’s been fine. Getting it set up is annoying as it is Arch with worse documentation.

By all means try PureOS first though because, even though I might get triggered by Purism, at its worst it is as FOSS as Debian and Debian is pretty FOSS.

I’m curious what gives you pause about the company?

what gives you pause

This post is going to get a little GNU plus Linux.

If a distribution goes out of the way to get endorsed by the Free Software Foundation (FSF) then they are saying to the community that their goals align with the FSF.

Purism‘s main deal is that they are self proclaimed super privacy oriented free and open source hardware and software with as few gotchas as possible. The Purism phone is the ultimate hardware expression of the ideals of Purism. Purism makes a big deal to seek FSF endorsement for their products and software.

Having FSF endorsement isn’t about being mostly free software. It is a commitment to a hard line philosophy purposely applied to software distribution and distributors believing in and strictly applying that philosophy to their software.

Purism essentially took the Debian Stable main repository, forked to PureOS, brought PureOS to meet the stringent requirements of the FSF, and got the FSF approval. After getting the FSF approval for PureOS they marked their libre packages as obsolete, rebased their distribution on Debian Stable and Testing (Amber and Byzantium), purposefully populated the main repository with software that they know is deemed problematic or unacceptable by the FSF, and ship that product as PureOS. Purism makes no distinction between the software products.

Purism essentially baited and switched the FLOSS community and the FSF.

The methodology that the FSF has in place to report free software violations is thus: contact the project and bring it to their attention and the project will remove the offending code. In practice Purism is aware of the offending code, up to the top man, and deciding that it is not an issue and closing the bug report.

Other FSF endorsed distributions, according to posts on their mailing lists, are aware of and disapprove what purism is doing.

When I get home today I will edit this post and cite my sources. Until then this is what I have to say.

(Note: Just a little history for you. One of the main reasons Debian isn’t a FSF endorsed distribution is because they host repositories for non-free and problematic software)

Head of Purism aware of chromium and offering two separate versions for convenience.

Bonus Stallman on chromium and qtwebengine, which is also shipped by purism.

This week, I did some network throughput testing to see how much overhead was introduced by sending traffic through wireguard. I used tools like iperf3, nethogs, and the Ookla speed test online.

This week, I did some network throughput testing to see how much overhead was introduced by sending traffic through wireguard. I used tools like iperf3, nethogs, and the Ookla speed test online.

I’m curious about your thoughts on the overhead. I may be dipping a toe into Wireguard soon.

Well, Wireguard beats the pants off OpenVPN and Zerotier, for performance.

Having said that, you will likely have to do some real-world testing around what will happen, if, say, Zoom meetings, or other video live streaming is simultaneously happening (upload-intensive activities), to tease out what kind of QOS rules (from your ISP) will govern or possibly crush the Wireguard traffic, once Wireguard is in competition with other kinds of upload traffic.

In my case, I had to face the unintuitive limitation of knowing my ISP would allow not more than about 1.5MB/sec upload through my Wireguard tunnel. And about 2MB/sec upload is the max I can get with my ISP.

After some experimentation, it turns out my ISP is applying a QOS rule limiting the Wireguard traffic to 1.5MB/sec upload (whether there is competing upload traffic or not), and then, for example, 2 simultaneous Zoom meetings comfortably fit in the remaining (seemingly reserved) .5MB/sec upload. Any upload demand (especially HTTPS) above that .5 MB/sec will almost certainly crush the Wireguard traffic, as a competition for upload speed unsues.

It’s your ISP’s QOS rules that you tease out which will be your bottleneck, if any, with Wireguard. Not Wireguard itself.

Just finished my weekly backup from Ryzen Desktop to Pentium 4 Backup Server and i5 Laptop. This time it took some more time, because I have added 3 Virtual Machines. I also deleted older ZFS snapshots on all 3 PCs. Once in a while I do it to keep >30% of free space.

In an Ubuntu 20.04 VBox VM, I installed the Virtual Manager and added 2 KVM Virtual Machines on top of the VBox Virtual Machine. After an hour of permission issues I detected, that I had to add the libvirt-qemu user to the vboxsf group using the terminal

I have the following 3 OSes running on top of each other. like:

Running on a Ryzen 3 2200G, the Ubuntu 14.04 OS is somewhat slow, but I wanted to renew my experience with the Virtual Manager settings and their effects. I had some doubts about installing Qemu/KVM and Virtualbox in the same host. It seems to work, but I did not really trust it for 100% myself. Besides I do all try-outs in a VM, if it fails you simply delete or roll-back the VM and you keep your host clean.

This week, I installed Linux Mint 20, and tried out lots of useful keyboard shortcuts.

Some of my favorites:

Had to manually upgrade LibreELEC to the newest version because it could not connect to the servers itself. Strange.

I found an old HP PhotoSmart C6100 without any ink cartridges. It has been used heavily, it looks really ugly now. I connected the printer through Ethernet and Linux directly recognized the printer.

The scanner, that I really needed, does require a lot of installation work using the terminal, unless I use the USB connection. The installation (make) of the HP Linux software crashed and it destroyed the “Software & Updates” utility. Fortunately I did it in a Virtualbox Virtual Machine and I restored the vdi file from a previous snapshot. I try to move the whole stuff to WiFi next week using the standard Linux software without any of the HP stuff.

I also have a Windows 10 Virtual Machine and that installation of the HP software went fine and currently I use the scanner with the Windows 10 VM. I already scanned one of the signed documents I had to sent to my bank in Europe and tomorrow I will scan the documents for my pension to proof, that I’m alive in mid 2020.

I have no printer and once or twice per year, we went to an internet cafe, once for printing and after signing the document, once for scanning. Costs 2 times DOP10/page, in total DOP100 or say $2/year. No valid reason to buy a printer/scanner!

Got networking over USB working for the Pi Zero here

Got networking over direct LAN (no router) working for the Pi 2 in both Local-Only and Internet sharing modes.

Experimented with both Pi Zero and Pi 2 as VNC 3rd monitors under these configurations. Zero was super lagging, daily driving the 2.

I found an old HP PhotoSmart C6100 without any ink cartridges. It has been used heavily, it looks really ugly now. I connected the printer through Ethernet and Linux directly recognized the printer.

I got a Brother PJ-763 for my 2 to 3 prints a year, CUPS picks it right up! Free is the right price though 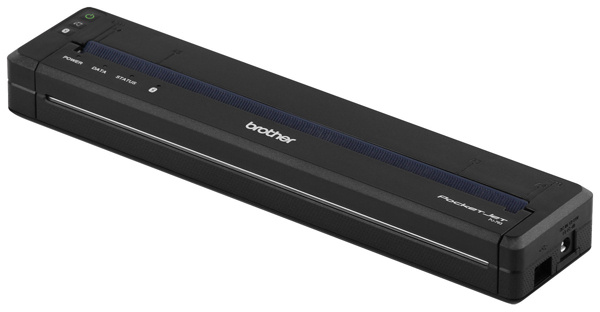 Changed my text a little bit, since I would need a printer/scanner. Indeed my one was cheap, but somebody in my wife’s family stored it in our garage and there I found it. She did not know, what to do with it. Since she lives in our house for the moment, I can use it.
I checked today, if I would buy a new cheap HP printer/scanner (USB) here, it would cost DOP 2500, say ~$44 without ~18% sales tax.

This weekend I have been busy working on DOSBOX, DOSSHELL, WordPerfect 5.1 and the games Winter and Wolfenstein. Dosbox runs on a Ubuntu 20.04 VM and that runs on Ubuntu 20.04 Host (Minimal Install). The resolution is 1440x900 for Dosbox. 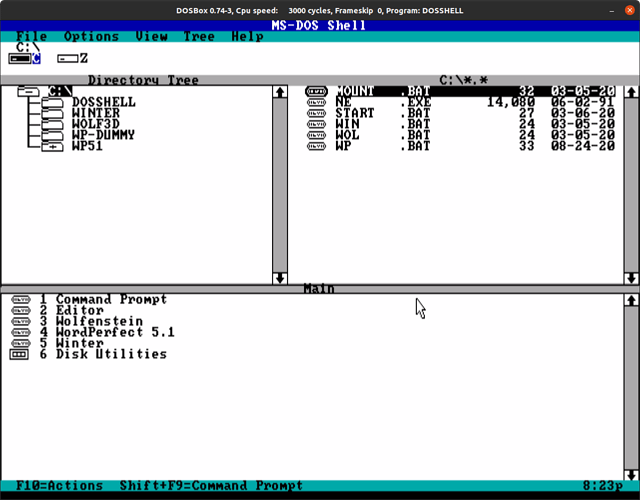 Dosshell has some problems dealing with the selections in the program list, so I use the added numbers for the moment. The mouse directly moves to one of the borders and is not very useful. 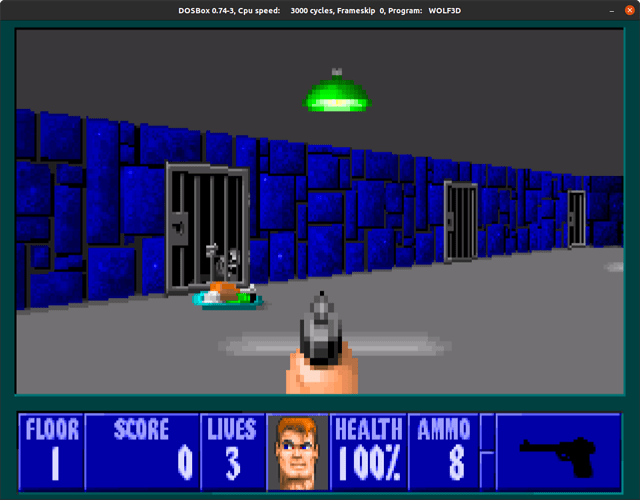 This week I discovered a couple of good Linux apps: foliate, and bashtop: 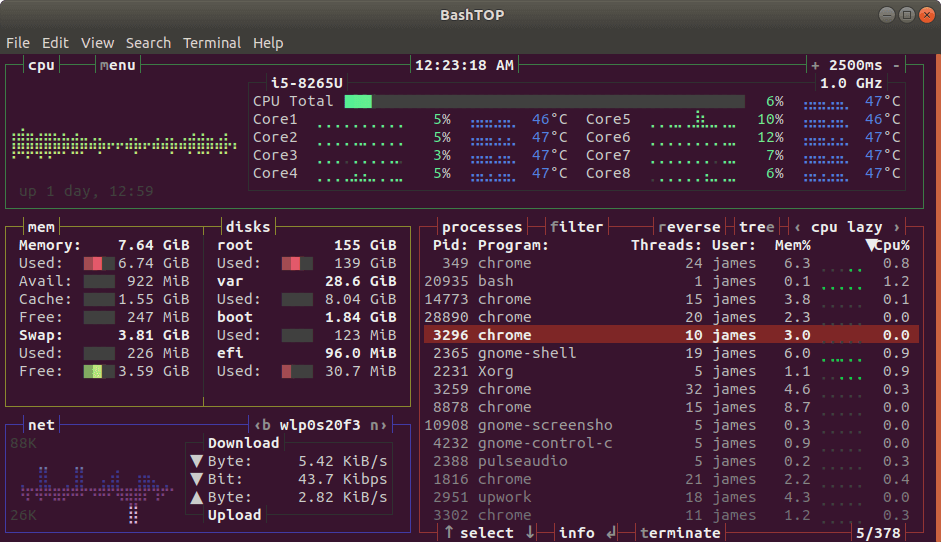 After reading a lot of glowing reviews about Strapi (a NodeJS back end framework) and watching a few tutorials over the past few weeks I decided to give it a try.

It had over one thousand dependencies.

and there our story ends…

On the desktop side, I’ve been on Parabola GNU/Linux-Iibre for just over five weeks now. I’m sure it’s only been this smooth because I don’t have any modern gaming hardware and also a video card which is competently handled by FLOSS video drivers. On this old reliable laptop I’ve experienced a fantastic Plasma desktop with minor hiccups. I need to use a USB wireless card because the libre kernel doesn’t support my internal (Broadcom) chipset but I knew that before going all in. I really like the laptop. The best part of this system is not having to compile packages by hand and automatic package management with up-to-date packages.

On the server side, I’ve also been looking at Podman for handling the containers I’m running with Docker on my server. I deployed a Matrix Synapse server which seems to have successfully federated. I’m still trying to figure out what “fediverse” software to run as they are all so neat.

That’s my Linux week. It’s been a pretty chill one.