Do we have any developers or other people working on open source projects here? Let’s share and maybe discuss them here!

I’ll start with some of my projects, although I don’t really have a lot to show.

quick-cd
download and source: Armas / Quick cd · GitLab
I was kind of amazed I couldn’t find this functionality elsewhere. You know how sometimes when you use a terminal there’s gonna be few directories you visit quite frequently and sometimes getting there takes a while as their path is rather long and maybe you don’t remember it exactly so you have to stop to ls here and there.
Quick-cd is little script (main file under 100 lines) that let’s you save location under a label and cd into it instantly from anywhere.

It’s buggy, not well written (it’s my first big Android app) and I don’t really have time to develop anymore, but it has functionality I couldn’t find in other readers. I don’t know if I’m ever gonna go back into it, but it would be nice to rewrite it so it works on both Android and Linux. Not sure how possible it is though. I know qt has Android API, but never got to write mobile application with it.

Currently I’m working on application that will be able to find similar images in a set. So far I’m testing different methods for comparing them. Still haven’t decided if I want to write it in python or c++. I don’t have a name or icon, don’t know how interface should look and I don’t know how to handle comparing each image if a set is really big, so it doesn’t take forever.

For every project I’m very open to help and suggestions, weather it would be bug report on gitlab or comments made here. Similarly I offer myself to help others with their projects if I happen to have proper knowledge or ideas.

I’ve been trying to learn python in my spare time and recently finished a gui that analyses my bank statements into categories and gives me a month by month summary of spend by category. It’s my first attempt though and is not fit for other people to use. I think I’d need to completely start again from scratch to fix the spaghetti code I’ve made and also fix stuff I’m not happy with. I’ve also not learnt how to use git yet so a long way still to go.

I think I’d need to completely start again from scratch to fix the spaghetti code I’ve made and also fix stuff I’m not happy with.

Writing awful code is great way to learn how to not write awful code and why.

My “find similar images in a set” is slowly shaping up, but I have problem naming it. I was thinking something with word “duplicate”, but it can mean to many things (finding identical files, creating backups). Another idea was “compare”, but this seems to make more sense when looking for differences in 2 given files.

Hmm, are they similar images in terms of subject (trees, cars, people) or similar in a duplicate sense (you took two pictures of the same thing) or literally the same md5sum?

Similar in a duplicate sense. Like same picture saved in different resolution using different extension, compression quality, slight differences in content and so on.

Sounds like something for creating copies / backups, but I’ll have it in mind when thinking of a name.

My “find similar images in a set” is slowly shaping up, but I have problem naming it. I was thinking something with word “duplicate”, but it can mean to many things (finding identical files, creating backups). Another idea was “compare”, but this seems to make more sense when looking for differences in 2 given files.

Are you still working on this project if so I wouldn’t mind contributing if I can depending on the language you are using I know (Java, Python, Some C, Swift, HTML, CSS, PHP, JS, and some Frameworks)

been using quick-cd for some python programming. Love this project you did a good job. Makes switch programming dir a breeze

That’s so nice to hear.

Yes, I’m still working on duplicate finder, but I won’t ask for help until I have minimum functionality working. Once I do, I’ll put project on GitLab. Right now there just isn’t enough for multiple people to work on it.
I’m writing it c++ qt. It makes work progress slower than writing it in python, but qt for python looked bit off and not native. Especially filepicker.

I moved my “duplicate finder” project to Python and I finally have alpha version.

It still needs a lot of work before proper release (especially better duplicate finding algorithm), but you can see code on my GitLab 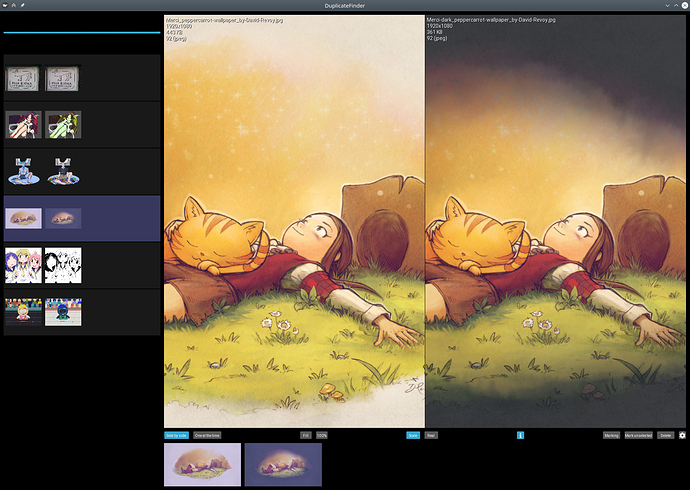