[Poll] What do Yall use as backups?

What do y’all use for Backups

I am planning for my next project to be a tutorial on how to use a program called Restic, However I wanted to see what everyone is currently using.

I personally use Restic.

I use KDE Plasma’s Backup system kup which is a kde implementation of bup, which I think Dublicaty use.

It can do versioned backups or incremental backups. Both to local and remote destinations.

What endpoints does it support? is it aimed as system info, or just user file?

I’ve got Lucky Backup setup on my laptop. Average Linux User has a good video on it.

Dejadup - Which, i think, may use the dupliciti backend. I’m not sure if it is the best out there, but it seems solid, stable, and works well for doing other things besides ‘backups.’ For example, when upgrading to a larger (or smaller-faster) hard disk, the backup and restore functions work well in leu of DD. Seems like @popey had a similar issue a while back with his daughter’s laptop, and something like this might well have fixed his issue.

Of course they did forget the most effective filesystem again, that one with built-in snapshots and backups. All the mentioned backup software are amateurs compared to ZFS. ZFS that only sends the changed physical records and if they are compressed, they are send compressed. I even backup from my 2019 Ubuntu 20.04 Ryzen Desktop (64-bits) to my 2003 FreeBSD 12.1 Pentium-4 Backup-server (32-bits)

Part of the backup are 600 GB of lz4 compressed vdi files (virtual machines) between 8 and 40 GB each. Note that often half the vdi files have been updated by their OS. The incremental backup takes less than an hour on a 200 Mbps Ethernet link!
I use the backup since June 2019. The bottleneck for the 200 Mbps transfer speed is the Pentium 4 CPU, that runs one physical thread at 95% CPU load for the network process,

I have a couple of high-capacity microSD cards that I periodically load up with any photos or documents I want to keep. It’s not a perfect solution but my backup demands are pretty minimal.

I’m a fan of ZFS as well, However sometimes being restricted to a single filesystem isn’t good for a backups. ZFS snapshots work pretty well for replication and sending to off site backup locations.

Good idea, I have a 64 GB microSD card in my phone and it has my photos and my music (LP/CD). There is a lot of free space left and I could include it in my weekly backup process for personal stuff based on rsync and a working KDE-connect browsing function in my Xubuntu VM. I would consider it as my off-site backup.

Why would only zfs be different than only ext4 used by the huge majority.

ZFS has a higher cost of entry compared to Rsync or Restic and isnt cross platform.

Concretely, what do you mean with higher cost of entry? You did not notice, that I used two different OSes; one 64-bits Linux based and one 32-bits Unix/BSD based?

We are thinking on different scales. To clarify,

Maybe you did not notice it, but Ubuntu offers, since 19.04 to install its desktop OS on ZFS. Since Ubuntu 16.04 you can use ZFS as data storage in the Ubuntu desktop. I use ZFS on desktop and laptop since 2018 first as data storage and since 2019 as boot FS.

I haven’t uses ZFS on items other than servers. Wouldnt surprise me that it works on a small scale as well as large.

Restic is a backup tool that performs the deduplication and encryption on the client side, and stores everything on the repositories as files. Doesn’t require any special software on the target.

Great thing about restic is because it uses an index to reference deduplicated blocks, multiple hosts can be backed up to the same repository and gain the benefit of being deduplicated in the repository. I use crontab to run an hourly backup and it only takes 2 mins for it to check 500 GB worth of files in my home dir on my desktop and send the delta.

Its similar to Borg.

Did you get around to that restic tutorial? 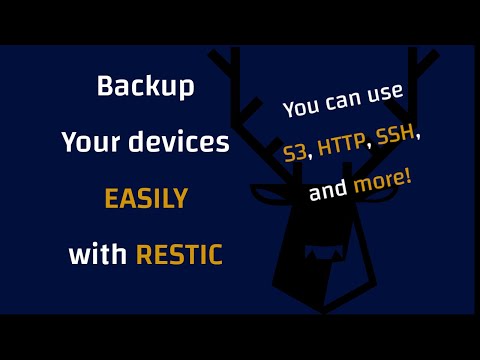 Dupliciti to MinIO on a synology NAS

For a while I used Borg with the Vorta GUI