Podcasting Procedures / Methods / Software (Not apps for listening, but for *making*)

I searched but did not find much on my question: I know about audacity and kdenlive, etc, and have seen comments on microphones and hardware, and podcast apps for phones and listening, but I have not seen much on podcasting “procedures / methods / sofware” used to MAKE the podcasts.

I can tell that you guys on the Destination Linux shows are probably on the cutting edge of putting together podcasts, and I would like to try to tap some of your knowledge about procedures. Obviously the technical quality is important, but what I am really talking about here are tools that help organize and pull together the “content.”

Have you guys ever posted an article or thread on how you assemble your weekly podcasts? I know that Mike Tunnell is doing most of the heavy editing, but to what extent are you guys scripting each episode ahead of time? Do you use particular software to develop and agenda and then type it up to use to prepare the show? I might have heard comments to the effect that you use a shared editing tool that is NOT google docs. Do you have any recommendations on that?

Also, as to actually putting together the final product (not the live stream, but the edited version) do you use something more sophisticated that Kdenlive and/or Audacity? I can see that it would be extremely useful to have some kind of program where you could organize audio/video clips, label them, move them around, and then assemble them into a final timeline, but I don’t see Audacity or Kdenlive as particularly friendly for doing that final assembly. Do you have any recommendations on that?

Obviously I (and I bet many others) are thinking about doing my own podcasting in different areas, and if you guys have any suggestions on the best software / procedures /methods to use I would be extremely appreciative.

Thanks for the comments:

I remember an episode of ask Noah when Noah intentionally spoke much more slowly and methodically.

I am SO glad he want back to his normal machine-gun delivery!!!

As to the suggestions, yes I know that audio quality is very important. My question however is really more about organization techniques for pulling together content from a variety of people, such as collaborative software to assist in scripting, executing, and then editing the final product from various audio chunks.

Any ideas on that part?

@Compass on mintCast we generally record with the mic open but not talking for between 20-30 seconds of background audio. This will give you a base line for using the noise reduction tool in Audacity and this can help a lot. Then when you are editing your audio later you highlight this section of the track that you recorded background noise, select noise reduction in the effects menu, use the ‘Get Noise profile’ then highlight your whole track and apply noise reduction using 12db, 6 sensitivity and 3 for frequency smoothing. Obviously omitting as much background noise as possible during recording is a must but despite this there will always be background noise so this is a great step as part of the audio editing process.

I wouldn’t consider myself an expert on any of this. For DLN Xtend, @EricAdams and I record in Audacity, we use PulseEffects for gating and compression, though I only gate right now and use the noise reduction function in Audacity to further remove the noise in the recording. I have a decent USB microphone on a boom that does isolate some of the noise. We each record our own audio so that there aren’t any “Internet Artifacts”. The editing of that podcast is done in Audacity where each of the track recordings are edited in parallel so we can get rid of any talking over one another and remove a lot of the excessive “ums” and pauses.

For my own separate, solo podcast, I record in Audacity, edit it down and import it into Kdenlive as it works as a non-destructive audio clip editor too. I can assemble and line up the music clips to the speaking and what not.

That is my two cents.

I was a radio DJ for about 6 years and probably 50% if my shows were pre-recorded. Keep in mind that recording and editing will take at least twice as long as the actual content you produce and that’s on top of whatever prep you do before hand. Personally I use Reaper. It is the most flexible Digital Audio Workstation that I know of. You can create your own scripts in 3 different languages to extend the functionality and there are already hundreds of functions you can string together into custom actions that take a single click to activate. I used it for live/studio music recording for 10 years so feel free to ask me anything.

@CubicleNate - So you start the audio editing in Audacity and finish it in Kdenlive, even though it is just audio, or are you using Kdenlive to add video or graphics? I have listened to mp3s of your podcasts but not tried to watch them. Does kdenlive make it easier to rearrange the audio?

I record and do most of the editing of my podcast in Audacity. I do just the Audio editing in a non-destructive manner for the final assembly of it in Kdenlive. I like using a music bed, force of habit, beneath my talking. The way I can overlay things in Kdenlive makes it a LOT easier than with Audacity. 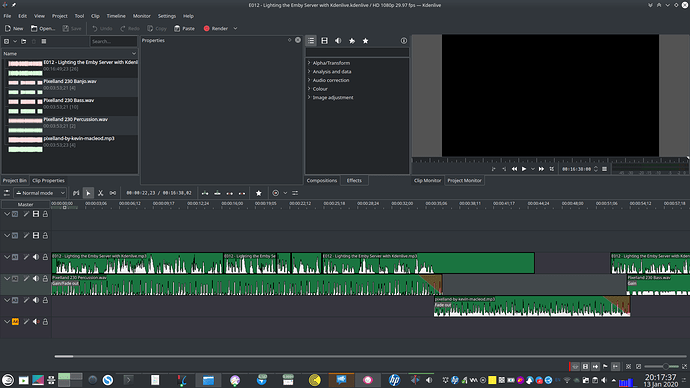 Here’s the process for DLN Xtend 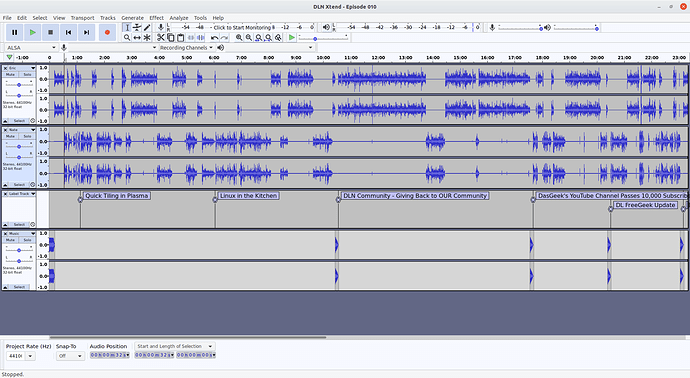 I am just going to go out on a limb and say that this might be overkill for a lot of people but I am trying to put out the best, most professional podcast possible, learning as I go. I will also say that if this were a video podcast, all of this would be about 1000x more difficult. Michael has spent years honing his process so he doesn’t spend all week editing a single show. We are only 10 episodes in and right now it’s taking between 15 to 30 hours to produce each episode (when I do it at least). Maybe we find ways to make this easier and faster but for now, it takes the time it takes to get the result we want. Not easy but we are happy with the results and feel like it’s getting better with each show. Hopefully other agree!

THANK YOU Eric Adams! (and of course prior responses) but THANKS for that detail and for the graphic! That is exactly what I was wondering about. Apparently I have a lot more learning to in Audacity because one of the major issues I had was visualizing the segments, and I see your third track is some kind of labeling feature that I have not yet discovered how to do. I did not know Audacity could do that so I will have to go looking what that is called. Duh I need to tell myself to RTFM: Creating and Selecting Labels - Audacity Manual

That response is just filled with tips that I needed. Thank you again!

Also: You guys are using a service (Fireside?) to host your podcasts? I was thinking that perhaps the DLN team was self-hosting … and of course that was another question, if you set up a server such as on DigitalOcean, what software do you use to host and serve the podcast?

Although this might be a topic for a different thread, as I really want to focus on methodology, but I am certainly interested in suggestions for podcast hosting options like Fireside (which may be the most professional?) vs Anchor (which is free?) and anywhere in between. Like I said I was thinking that self-hosting would be the way to go but you guys are the experts and if you have investigated and you don’t self-host, then that largely answers my question.

Not mentioned in the title of this post is podcasting HARDWARE. One of my favourite hardware companies, Audient, just announced something new that I thought I should share with everyone here. There’s not a lot of information available yet since these are not even released yet but it is iOS compatible, which leads me to believe it is USB class compliant, which means plug and play Linux operation. It is marketed toward podcasters/artists of all skill levels so it’s a device that could grow with you.

Anyways, in my opinion, a lot of people have expectations that exceed what the Blue Yeti mic can do and I see that mic recommended a lot as a beginner tool to get started. I think it’s quickly outgrown. A device like the Evo, matched with a half decent microphone is going to serve you better in the long run.

I have high hopes for these units, especially the Evo 8. So long as the headphone outputs are not mirrors of the 4 main outputs we could have a very compact and inexpensive surround sound setup on our hands.

Huh, editing the audio in Kdenlive…

Now I’m wondering if I could use this method to create a “pseudo-video” version of my show. Perhaps just with images/graphics and a few relevant video clips of what I’m talking about.

Fair point. I struggled with hardware for a long time. USB audio is okay I guess but I could never get it to be as good as I was looking for.

I agree 100% that people have unrealistic expectations of mics like the Yeti. Condenser microphones can be tough to deal with if you don’t have a quiet environment and can’t position it properly. I use a $50 Samson Q2U USB/XLR Dynamic Microphone which I find to be much better than the condenser mic I had been using. The really nice part, apart from being inexpensive, is that it is dual-purpose with USB and XLR connections. I have it on a $20 arm so I can position it where it needs to be.

The USB connection is fine but I struggled with pulse audio to get the sound I wanted which led me to trying the XLR interface. I initially tried a USB interface like the EVO but wasn’t blown away by it. I tried a cheapo mixer that ended up arriving broken so I returned it and went with the Behringer Xenyx 302USB. It’s a nice little mixer. Now I can mix the mix levels on the analog side and send that to my PC the way I want it.

There are a ton of great inexpensive options like the ones you describe. The trouble with Linux is that no manufacturers, except for RME, make drivers for Linux and the drivers have a software interface for controlling elements of the hardware. In many cases the functionality is seriously reduced on Linux for this reason. Your option works well because you have all the control over the hardware independent of software. It’s a more complicated experience for beginners to choose hardware and definitely leads to a lot of disappointment for new Linux users.

That would be cool. I was going to do some research prior to replying but decided I would live in the dream-space between my ears about how fantastic that would be.