While here in “self isolation” I’ve been messing with the new Beta of Devuan 3 (Beowulf). I think this is I think (finally) based on the current Debian Buster (Stable) rather than Devuan 2/2.1 (ASCII) which is/was based on Debian Stretch. (Devuan codenames are based on asteroids or something (Minor Planet Center Names List), so there’s an ASCII asteroid out there - cool).

The thing about Devuan is the don’t use systemd but offer SysVinit or OpenRC alternative (so really it’s for those allergic to systemd).

I had Devuan 2/2.1 on one of my laptops (the HP Elitebook 8470p I think) for quite a white and it worked as well as most other Linux distros for me. I had Xfce as my DE (of course) and really only got rid of it because

Anyway, Beowulf has been looking good, I’ve not installed it on hardware (yet), just been using the Live CD and it’s hanging in there. True I haven’t install all my usual default applications, but as those work fine on Debian Buster, MX-19, and SolydXK I don’t see why they won’t on Beowulf.

Personally I’m not considering changing to Devuan, MX-19 is doing me just fine but I probably will stick on some hardware (maybe that HP Elitebook again replacing the Xubuntu 20.04 that’s on it). I just thought I’d mention the new Devuan beta release in case anyone was looking for a non systemd distro. 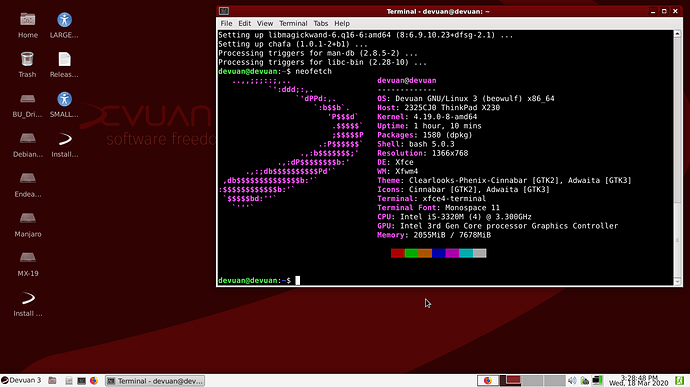 Now, where is that old Elitebook… it’s in this pile somewhere

OK, so trying to install Devuan 3 on my HP Elitebook 8470p has resulted in… trashing of both SSDs installed and long lost memories of old-style installers.

What is more, after 4 hours I hereby give up at 2am trying to install anything else (MX-19, Manjaro or Debian 10). While gparted is happy to see the /dev/sda SSD to recreate partitions, the other installers are happy to install the software, at the end of the process, on rebooting, the stupid computer tells me I need to install an operating system on the boot device.

A problem for tomorrow (or the day after - depending on when my brain feels like having a go. Thank goodness it isn’t one of the laptps I use much so it can wait.

The machine in question is now back in service (without Devuan 3 - I was not liking the default coloue/theme anyway). It now has my MX-19 as the default boot option, and Manjaro on one of the 3 partitions on the 2nd SSD, with 2 as spares for messing about with other distros when I feel adventurous again.

Interesting… Was Devaun using GRUB2 or ELILO to boot?