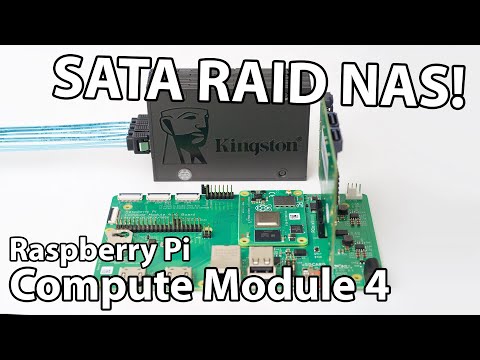 Jeff Geerling also includes some interesting performance benchmarks. He was able to almost saturate the Gigabit Ethernet using NFS (106.2 MB/sec), copying a single 8GB file, but then at 17:15 in, he confesses this full speed would not remain full speed stably, but would rather sort of become slower in little fits…

Personally, I suspect those excruciatingly-cheap Kingston SSD’s being the cause of the unstable full speed.

Note: There’s also an interesting Youtube comment, warning that the Marvel SATA controller chip on the “IO Crest” (the SATA card) is known to be a bit buggy if parallel S.M.A.R.T. operations are performed on multiple RAID disks, which can possibly lock up the RAID array, requiring a reboot.

I was inspired to build a NAS. I used five 2tb SATA ssds in a raid 5. The processor was an old 4 core AMD A10. I’m wondering if anyone knows if this CPU will bottleneck the disks or of the disk will be the bottleneck? I’m not quite willing to splash out for Ryzen just yet for this Nas.

The software is open media vault.