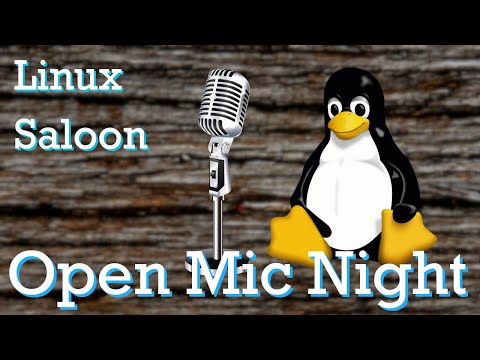 This is our first open mic night at the Linux Saloon. Because of how long we can talk about our experience, we are taking a break from Distro Explorations to just talk general tech and open source. Like every other Saturday night, Linux is always on tap.

The main conversation we end up having is around whether or not specialty distros are good for Linux. Since we all generally think that distributions are good and are ones personal artistic and technical expression to a computer problem, I had to pull out the “ObstiNate” to give a dissenting view and as a result, the conversation was fun, and beneficial.

Great show guys, enjoyed listening! Congrats to @CubicleNate for bringing together such a friendly and peaceable community with no toxicity. Birds of a feather definitely flock together.

Not A Linux Guru Guy’s corollary on “authors write books that they want to read” / “Distro creators make a distro that they want to use” is 100% spot-on. As the creator of a Linux spin (some would call it a distro) I can say that absolutely describes my personal case. I’ve always admired many aspects of openSUSE that I see as solving issues I’ve run into that aren’t really solvable in other distros. But on the other hand vanilla openSUSE is far from usable for my needs and for those of many new Linux users that I support. But fortunately those issues are easy to solve (albeit usually not obvious) for someone who invests the necessary time to polish openSUSE. So that’s where GeckoLinux sprang from.

I found @EricAdams’s distro crisis and video recording woes to be very interesting. In his comments he echoed quite a few of my personal preferences and experiences as well. I also strongly prefer Cinnamon, and I also consider it to be the best balance between usable defaults and easy/flexible customization possibilities. And I also have that same intangible feeling of something being a bit off every time I use Plasma / KDE, I can’t quite put my finger on it, and I used it as my daily driver for a long time. Even the one of the top Plasma devs Nate Graham has mentioned that exact same sort of intangible feeling with Plasma, which he’s working to improve on. And just like Eric mentioned, I’ve hopped distros heavily for over 2 decades, but now I’m at a stage where I just need to get stuff done and I value a reliable and predictable system with no distractions above all else. Regarding the issues that @EricAdams is running into: By any chance did you check which processor governor is being used? (cat /sys/devices/system/cpu/cpu*/cpufreq/scaling_governor) For my other hobby of playing the piano with my MIDI keyboard I’ve found that for anything that requires near-realtime processing the default powersave governor that many distros use by default will definitely lead to occasional stutters like you described, and it must be switched to performance. I also wonder about the impact of which disk I/O scheduler is being used, especially for something more I/O intensive like video recording/streaming. There are also quite a few very obscure low level tweaks to PipeWire and even /etc/sysctl.conf that make a big difference for realtime audio, and I suspect that they might also help for video. I’ve included them out-of-the-box with GeckoLinux, and I’ve found the Rolling Cinnamon edition to be almost perfect for my daily driver and also for my digital audio workstation for just getting work done (not related to Linux) with minimal surprises and annoyances. I hope you can find a solution that works for you, let us know what you try and what works and what doesn’t. That sort of issue is critical to making Linux viable for more users, especially those like you and me that need to get serious work done with it and are more than just drive-by reviewers.

Thanks again to everyone involved with this great group!

Hello and thanks for the detailed post. I really appreciate the information you provided. After the stream, I booted to the other Linux install on this machine, Linux Mint 20.3 Cinnamon, and tested the same setup. I had none of the stuttering issues I experience on Pop_OS!. I checked the governor being used and it is powersave as you assumed it would be. It didn’t seem to matter, or at least I wasn’t able to recreate the same issue on Mint (thus far?).

Because it is already installed and, in the interest of getting some things done in the short term, I am going to stick with Mint for a bit to see how it goes. I’m very happy to hear that you have made these extra tweaks to GeckoLinux and will be replacing the Pop_OS! instance with it. I’ll try to get to this in the next few weeks and then reply back to let you know my findings.

I think you had seen the video I made a year or so ago on Gecko. I was impressed with it then so I look forward to trying it again. Thank you for putting out the recent update. I know it’s a lot of work that you aren’t being paid to do so I appreciate you essentially giving your time to me for free. The least I can do is to provide feedback and, if I like it, let others know.

To anyone else reading this, if you would like a dead-simple way to get up and running on openSUSE fast, GeckoLinux is your answer. It uses the Calamares installer instead of SUSE’s and comes as a fixed (Leap) or rolling (Tumbleweed) release with Cinnamon, XFCE, GNOME, KDE Plasma, MATE, Budgie, LXQt, and barebones options for each. Downloads, documentation, and more at http://geckolinux.github.io/

Great to hear that Eric, thanks a lot for the response! Those are interesting results you found with Mint, so that seems to suggest that it’s most likely a kernel thing. There are also a lot of compile options for the kernel with things like tickless or dynamic tick speeds that could also probably be different between Mint and Pop_OS!. Or, a less likely possibility is that it could be Gnome. I guess it’s possible since Gnome has very low-level integration with systemd and the DBUS and things like that. But I’m just thinking out loud here, I don’t know how to interpret it for sure.

Also thanks for your kind words regarding GeckoLinux, I’m excited to know how it will work for you (eventually when you have time, because I totally understand how it is when you just need to get something done using whatever you currently have installed). Also I’m not surprised that Mint is behaving itself better, it’s just a rock-solid no-nonsense distro that I also highly recommend.

It’s funny, GeckoLinux was started as a mainly selfish effort to take the base distro that got closest to offering my Linux needs and then me fixing a lot of approachable paper-cut issues that can be solved via configuration, as I’m not a programmer and I don’t like compiling custom packages and things like that. So I’m happy that it’s turned into something that can be useful to others as well.

From an admittedly biased perspective. I totally agree with the whole premise of GeckoLInux. openSUSE, while a fantastic base has some User Experience issues because of who their target user is. I feel like GeckoLinux really smooths much of that out and I would like to see many of these approaches upstreamed into the openSUSE distro itself. Though I also see, it is actually quite nice to have GeckoLinux do what they do in order to work out specific questions the way they do.

Also, just a note, I am not picking up any of these “problems” with Plasma. Though, I have been a pretty heavy KDE user since 2003 and therefor my expectations are bent a certain way. I happen to feel constrained and limited in every other desktop environment as such that I feel like the changes I want to make are forbidden… but that is just a feeling.

I love this conversation and I feel like this really needs to be brought up on Linux Saloon.

but that is just a feeling

Yep, as are my subjective comments on the feel of Plasma. The closest adjectives that I can think of are “chaotic” and “brittle”. In actual reality it’s probably something only perceptible to the subliminal mind like the order of how KWin paints the pixels on the screen compared to Mutter/Muffin. Definitely not a deal-breaker, and Plasma is definitely the best choice for a lot of potential and existing Linux users.