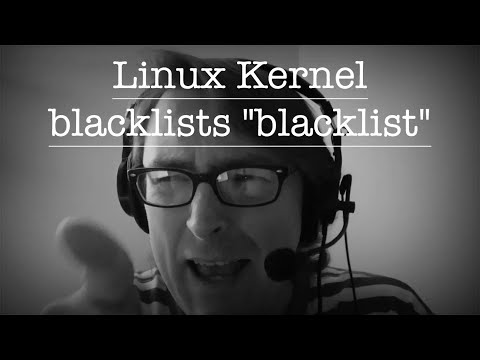 I think this is worthy of consideration as it’s been a growing trend in Linux leadership.

I don’t find any one instance objectionable but from a broader perspective I don’t think the inclusion of a social campaign that appears willing to manufacture problems in order to create industry-wide expectations of performative social compliance is likely to be a winning strategy for software seeking to serve, not control.

I think Linux must be a community that welcomes people in good faith and judges them by the content of their character, not their immutable characteristics or the worst interpretations of their speech.

I think it’s a point of pride that words associable with negative hisory could become so well defused. It’s a declaration of evolution, a social victory, that they’re regarded with ambivalence and I hope we don’t waste any more time than we need to that could be spent contributing.

I don’t follow Lunduke but this is a shout out, thank you.

Interesting choice of word. There are still plenty of unexploded ordnances across the world. Designed to hurt, maim or kill people. The war, however, is long ceased and the sinister desire behind these weapons dead. The UXO still might perform the destruction for which it was designed. When one is discovered, a precision response by a bomb squad is needed to defuse the explosive before an innocent gets hurt. After the explosive is defused, it is then safely destroyed. The parts are then disposed and a messy piece of history gets laid to rest. Maybe the Linux community should look to sweep the area, disarm some ancient mines, and make the place a little easier to inhabit?

On the terminology changes, they were never conceived or perceived to be a social statement about American history until recently manufactured to be. Removing context from language creates an almost unlimited capacity to weaponize formerly inert material.

Without context the term, “man pages” becomes gender excluding. Switching from blacklist to redlist becomes a derogatory term for Native Americans. I used the term “manufacture” because this is a proverbial mine layer problem, not a mine problem.

I can’t ignore how good your point is though. Sometimes there’s historically oppressive intentions behind terminology and even when there isn’t the performative act of cleanup helps spread positive social awareness.

Though i’m wary of principals that erase the parts of history we don’t like. Keeping dead relics in plain view sends a strong message every time they’re used, that the history is acknowledged, that it’s owned, and in every de-fanged usage is repudiated.

Ultimately though word choice is a symptom, not a cause. There’s no level of dictionary edits that can win a human heart and there’s unlimited ways to re-invent expression for people to say whatever they like. I think it’s up to us to say there are no words that will bring back history and the proof belongs on the table.

I think this crap is utterly stupid. Those word usages comes from real life usage with things., not on some negative racial, or sexual usage.

The usage of blacklist goes back to the 1600s with the the first known use of the term appears to be in The true peace-maker: laid forth in a sermon before his Majesty at Theobalds written by the Bishop of Norwich, Joseph Hall, in 1624:

*“Ye secret oppressors,…ye kind drunkards, and who euer come within this blacke list of wickednesse.”

Black was used a negative connotation due to superstitions, and ignorance, not on some black people.
Like a black cat crossing your path. Recall, night time (the blackness of the dark) is when evil spirits are suppose to come out.

People today are feigning outrage over their own ignorance and where there is no outrage to be had.

I’m pretty sure nobody takes issue with the early 1600s definition of blacklist. I reckon the issue starts with how the term was used from the late 1600s through the 2020s as a means of naming and outing enemies/rivals of organizations, denying people employment or membership, and restricting social mobility.

However, I doubt that is the reason for renaming. How ever you want to call it now days, the meaning still remains the same.

I think it is the right thing to do. Everybody wants to to the right thing I guess and we should probably really remove words that could have a negative connotation even though you might not grasp it yourself. Context is important, look at the Gimp project, but words like slave actually really sound bad.

I only fear that we have good intentions and it will clear our consciousness but in the end it will be business as usual.
Language is not the only thing we might have to change but it could be very well the beginning, the small steps, into the right direction.

To make my opinion clear. I am not opposed to the changes but I am also critical of how far we can go.

I can understand why people view certain terms like “slave” or “blacklist” in a aggressive connotation, the problem I have is not with the argument that these words can be associated with historical malpractice, but the idea that words can and should be excised so long as any bad association can be made no matter how the word is actually being used. this is not going to solve any problems nor is it going to move us in the “right” direction, if any thing I believe it will encourage going after anything or anyone seen using these words and label them racist or bigoted regardless of how the words are actually being used.

side note G.I.M.P. is a perfect example of a word that I believe is used in a perfectly valid moral way and if anything I would rather people associate gimp with something good than with something bad, words can evolve or devolve they are not set in stone.

It’s difficult to be downstream of an authority as high as the Kernel because even though unintended, their changes generate less than fantastic insinuations about companies and developers that don’t adopt their reinterpretations of context.

It might be worth watching how the pressure applies down the stack so it’s in memory should the Kernel begin expanding it.