Many linux enthusiasts love the fact that they have so many options to choose from when it comes to distributions.

Sadly, they might have a false sense of confidence in thinking they will always have a robust ecosystem. In reality, the writing could be on the wall. It could be said that the pool of high quality, mature, deeply supported linux distributions will only get smaller and more shallow in the years to come.

Let’s look at a brief scan of the landscape.

Yet, the ground beneath Suse is forever changing. Isn’t about time it goes up for sale and bought out again? Oh, but that shouldn’t impact OpenSuse since it is an independent community, right?

Yes, but just as Ubuntu is spending less and less time on Desktop, we can very well see OpenSuse thin out in terms of its focus on its desktop experience polish as well with the introduction of ALP (Adaptive Linux Platform). This is set to replace Suse Linux Enterprise. We are told it will serve as a kind of “host OS, and the and the layer providing and supporting applications, which will be container (and VM) based" (SUSE Software Solutions - News Detail).

This smells like they are entering the Immutable file system space (like Silverblue) which, in many respects, doesn’t give traditional linux users the kind of control they are use to in working with their systems…at least, not with some technical wrangling with layering.

Are we really to think the direction of Suse’s new “true north” will have zero impact on OpenSuse? Does the OpenSuse leadership have the organizational talent, time, and tenacity to lead in this uncertain future (esp. with Richard Brown no longer President)?

Time will tell. But what about the indy/community based distros?

We don’t have to look far to see how many come and go. To be honest, it is a wonder how recent founders still do not learn from previous examples to keep history from repeating itself. Some of the rising stars have imploded as fast as it rose to greatness. The biggest example? Elementary OS.

A once shining gem is barely shining with rumors of recent financial woes and a leadership split. MX Linux will rock along. They have an incredible model and might be the anchor that holds it down for many who feel they have nowhere else to go. It is probably the reason why they are so successful (aside from the distrowatch bot! Waka waka!). No, but seriously. Its only draw back isn’t really a draw back. Its faithfulness to its base (who don’t mind dated looks and curated default apps that have very dated ux design ) will turn a lot of people off who can’t look past not having a modern feel.

Linux Mint may or may not be around - unless Cleb has a solid succession plan which, if what we hear of his “leadership style” is half correct, is probably unlikely.

You might think, well, Caleb is going to be around for a long time, what are you talking about?”

Ask the Peppermint OS community how fast things can change.

If all this plays out - we will be looking at a very anemic linux distro landscape in the next 5 to 7 years…meanwhile, close source proprietary companies big and small will leap frog us (yet again) in the areas where most NEW users are getting a NEW introduction to “personal computing” which is the tablet and VR/AR space. More on this at another time…

What will this all mean?

You will always have the major players, but maybe just a shell of its creative energy and technical chutzpah. But that is kinda my point. It doesn’t have to be a “sudden end” to Desktop Linux to make it tragic. Maybe the narrative is the once forward thinking and radical community who had to courage to see where things are going and say “We can do it better” is dozing off at the wheel because it loved “how it is and one was”.

Of course, Desktop Linux will never go away…but maybe it finds its demise by thousands of paper-cuts over a long period of time? So while we will always have a linux desktop landscape for years to come - it might be a slow and silent crumbling that no one hears. And to me, that would be just as tragic.

On Ubuntu I think it depends on where the bar is set for innovation. I think they are, just not in ways i’m interested in.

On the desktop, I think the problem is developers get their revenue almost entirely from the server space and without revenue there’s limited incentives to pour 4x to 10x + more time into their pet projects and improvements to make them usable for everyone.

I think the Android app store is a good example of how monetization could disrupt an otherwise benevolent community because my trust in those apps is near zero but there may be some compromise that still promotes FOSS and user-serving apps.

I disagree, mainly because when I think of Linux, I think of for the community, by the community. That rules out commercial distro’s (all three of your original references).

Now, these are community Linux distro’s. Take a look at them and you will see only growth.

What will happen to Linux in the next 5 -7 years. IMHO, only advancement and growth.

Do these companies contribute to desktop Linux? Yes, they have been a large contributor and have been very innovative. I really don’t see that changing.

As long as we have companies that are willing to invade our privacy and try to control our computing experience, there will be alternatives. Linux is very firmly planted in this area and I don’t see that changing. Too many people have had enough of the BS. I think the Linux community is stronger than ever and will continue to grow.

Disagree. I see a fever dream of cherry-picking and [citation needed] takes.

Championing Desktop Linux but immediately writing off new Desktop Linux concepts such as ostree and containerization and perhaps also shade at new desktop technologies such as systemd Wayland and pipewire.

Leaving out entire branches of the Linux distribution tree such as Arch-based (super healthy if all these derivatives are a measure), Gentoo-based, Slackware is still kicking.

Not even to mention needlessly and casually name-dropping Richard Brown as some sort of champion of the traditional Linux Desktop.

It just comes off as poorly researched to me.

low and silent crumbling that no one hears. And to me, that would be just as tragic

I think your fears are unfounded. It’s probability best not to wager against the creative genius that has brought Linux to this point.

I think those fears are nonsens:

I think the future of Linux is great, the support for games gets much better and we have a number reliable desktop OSes supported by established companies. The enthousiats will always find the odd strange and overly complex distro and promote those, but smart people will after the first year, ignore those and go for the main desktop OSes. In my opinion those are Fedora; Manjaro; Ubuntu and most of its derivatives, like e.g. Linux Mint and Zorin.

It’s the community behind a distro which makes it the best: how much goodwill a distro has behind it to mop up all the most annoying bugs, and create a holistic, “just works” experience, for the greatest number of common use cases.

So to me, speculation about which distros will rise and fall is really just a prediction of where the community brainpower, and mindshare will sort of “pool up” over time. Every up-and-coming distro might have some great new innovative ideas (Elementary OS is a great example of this), but when the community backing doesn’t really hold up over the long run, then that distro is sort of doomed. It will have more and more frayed ends which never get fixed, which eventually chases users away, to greener pastures.

I think there will always be a vibrant and dedicated community behind some distro or other, it’s just sort of crystal ball gazing, guessing where the mindshare will end up. The distros I prefer the most, as places for such community energy to get behind would be: Debian, Linux Mint, and MX Linux. If only I had a magic wand I could wave and make that happen.

Linux Out Loud picked up the topic for further discussion. I love it when they do this.

https://youtu.be/L33_fLKaMgE This week, Linux Out Loud chats about a community opinion piece by Profetik. Welcome to episode 11 of Linux Out Loud. We fired up our mics, connected those headphones as we searched the community for themes to expound upon. We kept the banter friendly, the conversation somewhat on topic, and had fun doing it. 00:00 Introduction 01:09 24 hour Charity Livestream 05:57 LRCNC Update 08:59 Bendy Replay 16:32 Linux Desktop by Profetik 31:24 Surprise Purchase 32:00… 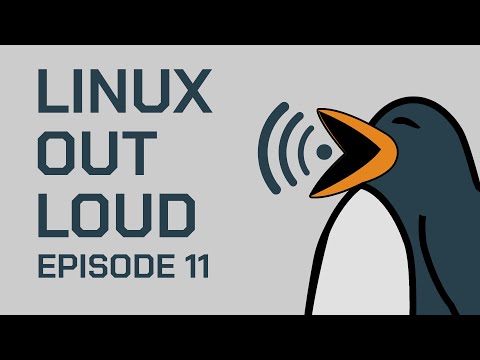