I have an HP 7 tablet, it has pretty modest specs:

It was originally running Windows 8, but Windows on hardware like this is not good. But installing Linux is harder. These are the steps you have to take.

I was at one point somehow able to get Ubuntu MATE 18.04 installed, where I installed other desktops on top of it to see how they ran, but I accidentally broke the setup and I don’t know if I want to go through all that hassle again. For reference, I have tried Unity, Plasma, Gnome, & Mate and so far Plasma has acted the best, but it’s an older version, like Plasma 14 or something. I think Plasma 5.18 would work fairly well on this device, but I don’t know if they’ll be releasing it for 18.04.

I have tried other distros such as openSUSE Tumbleweed, MX Linux, and Android x86, but the two I seem to have the most success with are Debian and Ubuntu.

If anyone has any ideas, I’ll all ears.

It should have the latest Plasma, but it’s currently based on Ubuntu 18.04!

And let me know how it works… I’d like to get Linux installed on a Tablet!

I tried KDE Neon, they only have 64-bit builds available

I was finally able to get MX x86 installed, I just needed that bootia32.efi put in the right folder (boot/grub). Apparently XFCE is not completely terrible with touch as I had assumed. It’s not the best thing ever, but it’s about on par with Plasma 5.14; they both have their pros and cons.

Windows 8 was very touch screen friendly, and not very desktop friendly. Thus, a lot of 7-10 inch tablets appeared on the market. Then came along Windows 10 which broke the touch screen interface, and went back to mainly desktop one.

Microsoft is now an abject failure, and have no clue what they are doing anymore.

At some point I came across two links (one, two) that refer to Fedora 32bit UEFI support, but was not able to understand if it really works and check it since I do not own such device (was looking because a friend asked).
So, maybe you can test it.

Edit: ah, so you are already using a .efi file from Fedora, so you probably know more than me here

Posting from the device. XFCE seems to work better than Plasma, oddly enough. I’m thinking bout doing a write-up and video about it… 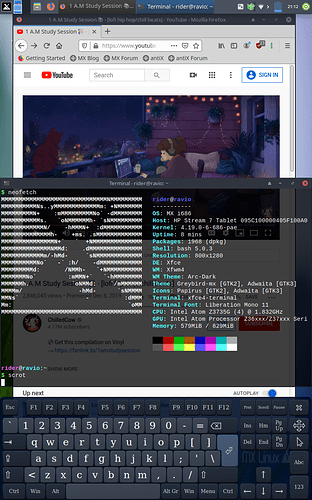 After nearly a year I finally made my video on this. You can watch it here: HP Stream 7 and Linux?!