Hey there folks,
Looking for suggestions for hardware to get for gaming…that will eventually could be used with Linux. Allow me to provide necessary background…(sorry for the length, just want to show you what’s in my mind)…
I have a teen daughter who is beginning to get into gaming. (Admittedly, i think its more for socializing than true, hardcore gaming…but we’ll see.) My plan was to get her the latest PlayStation (hardy har har), but with supply chain problems, kind of a moot point. But then my daughter approached me asking if we would consider getting a PC/tower for playing games via you know “a regular computer”. I have not gamed at all since Descent 2 was out…so that ages me. Nevertheless, i saw this as a double opportunity: 1. Maybe i could get my daughter a gaming PC rig, and maybe she’ll get more into computing even slightly (and then of course into linux); 2. If she gets bored of gaming on PC, i could re-purpose/turn the hardware into a home server running… a linux distro (ta-da)! Now the reason i say “eventual linux” is because at this point as much as i dislike Windows, i’ll buy a gaming rig with it for my daughter to play games…but again if/when she stops using it for gaming, right away it will get a linux distro installed on it. (So, eventually, this machine will be running linux.) My question to everyone here: are there any brands or models of hardware/PCs/towers/desktop machines that folks can recommend that (after some time used as a windows machine for gaming) can be perfect to be used for linux. I should add that, yes, i know i can get linux to run on pretty much any machine…But my fear is with the posible concerns with drivers for graphics cards and other hardware components that the cheesy window machines tend to come with, and whether they’ll be ok running linux afterwards. For one example, at my local MicroCenter they sell a brand of computers named PowerSpec - which i never heard before…so am a little stuck in deciding what brands/models to research, etc. Again, the short-term goal is for gaming (so need to tolerate windows i guess), but the long term would be linux usage. Any suggestions? Or, am i over-thinking/over-worrying about this? (I should add that i’ve built franken-computers for many years, but for server purposes…because i’m not really a gamer.) Thanks very much for any input you all can provide!!!

If you want to introduce your daughter to Linux you’d probably want to offer her a Linux machine first, then Windows to fall back to. It also depends on the games she wants to play because while a great deal are Linux compatible, some aren’t and others use anti-cheat mechanisms which aren’t compatible with Linux so you’d need to check first.

The easiest solutions I can think of is buying a desktop from System76 (let your daughter help you pick the hardware specs) so it’ll be ready to go out of the box and if you need Windows you can either wipe the drive or buy a 2nd harddrive to swap in and out.

In general, all hardware is horribly priced right now. Graphics card prices are absolutely atrocious! Most of the time it is cheaper to build a system than purchase a pre-built one. Many of the prebuilt systems will come with low-end graphics cards unless you get one specifically made for “gaming”.

Do you know what games she is interested in?

I got a nice gaming mouse, even though I’m not a gamer (I wanted something full-sized, corded). Worked right away in Ubuntu 20.04. A Razer DeathAdder Essential Gaming Mouse: 6400 DPI Optical Sensor - 5 Buttons - Mechanical Switches White 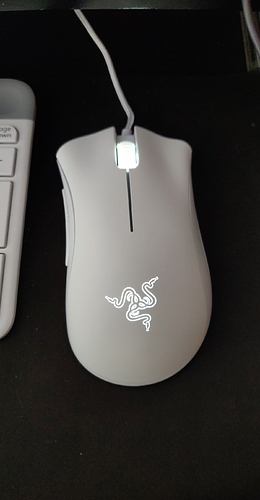 Thanks @TheWendyPower ! Yeah, when i was building my own franken-computers 20 years ago, it was always cheaper to build my own rather than buy prebuilt stuff…sounds like things haven’t changed there.

And, agreed, i’m seeing hardware prices way up right now. You ask a great quesiton about which games she is interested right now. I’ll ask her. I kind of got the idea that she might not know herself…i think she’s sort of just following whatever her friends will get into…Like i noted, i think this is less about true gaming and more about socializing. But you gave me food for thought:

Gaming nowadays is almost entirely social. there are very few games I play nowadays that doesn’t have some sort of multiplayer option.

Have your daughter take the games she wants to play and slap them in ProtonDB, Ussualy you can save yourself some pain by reading the comments. But if there is one that uses EAC or is windows only… well,

If you custom build, you can get gread linux support and meh windows support using the AMD line of GPUs, those drivers are baked into the kernel, But one problem of turning gaming computers into servers it that if its a whitebox build (custom built) then most dont have a IGPU… but need one to boot. Meaning you have a server that requires a GPU to boot. Just something to keep in mind.

Regarding the AMD line of gpu’s, i don’t know how they behave these days, but i never had that much succes with them. Nvidia did a better job at supporting Linux, or at least, that’s what i found out on my rigs that i’ve built over the years.
I’ve stayed away from AMD’s gpu’s, but if they’re as good as you say @rwaltr, i’ll consider them for the next build.
I’ve always been a fan of their cpu’s though. The 3xxxx (Matisse) series have an excellent balance between budget and performance.
@mxu they’re worth while considering, when sketching out your build.

take the games she wants to play and slap them in ProtonDB,

That’s a great idea!!! I’ll be doing that! And, appreciate the insight into the AMD lines of GPUs. I’ll certainly take a look at these. Thanks!

@Eltuxo I’ve had great luck with AMD devices in general with respect to linux over the years…But since my experience is in server-type machines and/or older machines before GPU stuff was more common, all this GPU is newish for me. Nevertheless, I’ll be looking at AMD stuff. Thanks for your feedback!!

Ya, knowing what games she wants to play will help. There are a few games that don’t play well with Proton, but many do. You can always have a separate drive with Windows on if there are just one or two games that require Windows for the anti-cheat.

Waiting to buy parts or spending a LONG time searching for parts that are not over prices is the only way to not overpay. I have lucked out at my local pawn shop, getting two separate two-in-one laptops for below current asking prices.

Thanks for this info! And as to the separate drive for windows partition…that makes me wonder: if i eventually get/build a powerful enough rig (with enough oomph and RAM), i gues i could set it up as linux from day 1 but have a virtual machine image for windows…so my daughter can just spin up windows if any game performs better on windows! ah-ha!

Also, thanks for mentioning about trying to source hardware at a local pawn shop. I vaguely recall you mentioning the pawn shop approach on a recent DLN Extend podcast episode - which is a great idea to try - so i will give this method a try. Hey, if that approach doesn’t work, i can wait for prices to dip, etc. Thanks so much!!!