Following from discussion in DL Episode 256 regarding Debian Stable and Firefox ESR updates, as a regular user of Debian Stable, I am keeping a close eye on this and sharing this info in case it’s of benefit to other users too:

Update, with history below:
On 11 Feb ~10:00 UTC as far as I can observe
Flatpak LibreWolf (tracking Firefox Standard) still updated to 97.0 (latest version)
For comparison:
Fedora 35 repo on Firefox (standard) version 97 latest version since 10 Feb 22, with one further local Fedora update also applied
CentOS Stream 9 repo on Firefox ESR 91.5.0 (one update pending)
I fear CentOS Stream 9 lag may be of concern to enterprise users relying on it.

This is really useful. Thank you @ak2020

You’re very welcome. I notice Debian Stable has updated their repo faster than Fedora and CentOS Stream 9 for this minor update

This is somewhat comparing apples to oranges (ESR vs Regular Firefox) but yeah Debian Stable just beat Fedora 35 with update speed on the Firefox each OS ships. 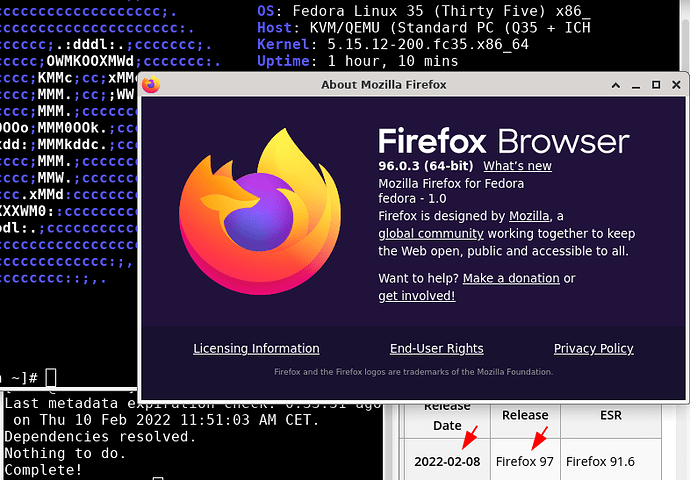 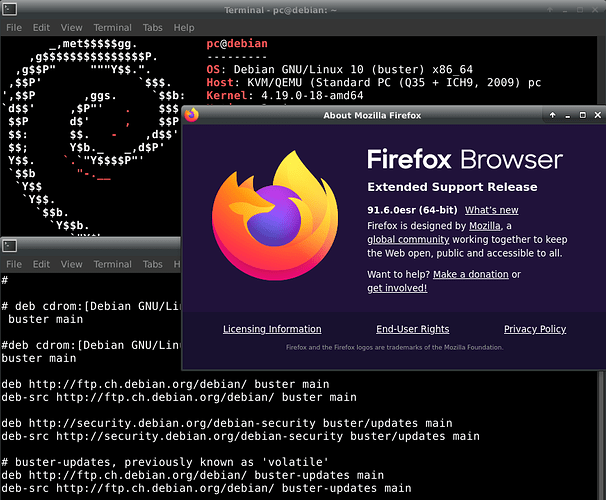 I’ve just checked on Fedora 35 and CentOS Stream 9 ~13:40 UST Thur 10 Feb 22. Neither have updated (Firefox (standard) and Firefox ESR respectively), which is also a concern because there were 13 security fixes in the latest Firefox (standard) and 9 security fixes in the latest Firefox ESR. I think possibly an advantage on users on both of those systems to use Flatpak Firefox meantime.

Mozilla have updated Firefox ESR as of today. Will be keeping an eye open again to see when Debian Stable follows through!

Yeah my bet is on Debian, possibly before any other distro updates.

Debian Stable Firefox ESR: I have just updated to install the security fixes from the repo on 06 Mar 2022 ~9:15pm UTC, so the day following security updates from Mozilla, which I think is pretty impressive

Debian Stable users please note that Firefox ESR update issued 3rd May has not been implemented in the repos yet (UST 9:34am 04 May) so I’m using the flatpak currently, which has.

I’m pretty convinced now that the lapse of a few days Debian Stable had updating Firefox ESR was when it did the major jump which happens every seven months or-so, I think. So I’m feeling safe again with regard to browser updates on my favourite system

Also, Chromium has had quite a few updates of late too, but not been tracking how quickly those are implemented.

Happy and safe browsing, everyone!

Also, Chromium has had quite a few updates of late too, but not been tracking how quickly those are implemented.

They have become very good recently. Chromium is now on version 101, at least in stable-security, so it will hit stable soon. Definitely faster than before.