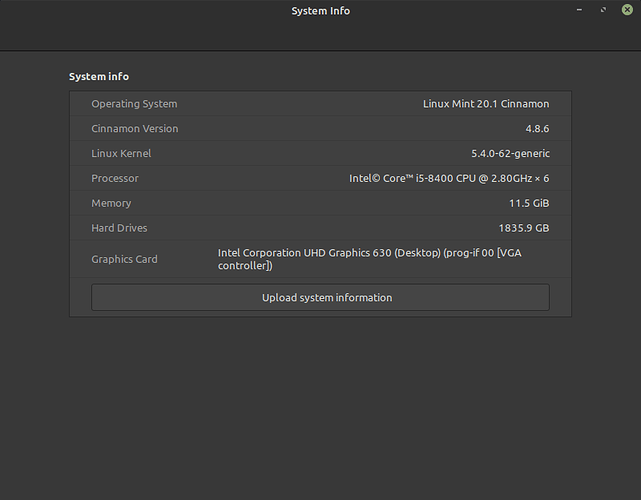 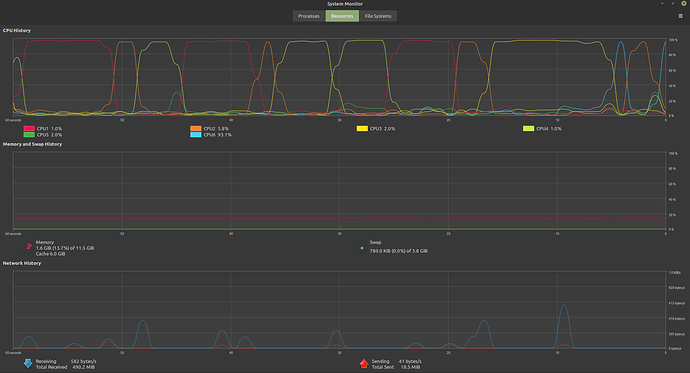 What do you see from something like top or htop ?

The same thing. One will peg and then quit then another, then quits, then another. System monitor was just for the graph to show how it’s acting.

It doesn’t show you the command or the pid using CPU?

Ah, that would have been smart to do. I’m in a fog tonight. Didn’t even dawn on me. I uninstalled Firefox and was watching some Youtube on Brave browser. I rebooted and it seems to have calmed down. Wish I’d have viewed the processes instead of pulling the trigger and posting. Sorry.

That actually uses CPU. It is always some video (HTML5 or otherwise without hardware acceleration) or rendering heavy JavaScript in the browser. Though you said on idle.
Then I guess some background process. In Linux Mint there could be three things running, the update manager, the flatpak update mechanism, I forgot the process name and if you have it enabled, rsync running in tandem with Timeshift and making a snapshot. The last one is the highest in CPU usage whereas the others are more moderate but the flatpak thing is noticeable.

The next time open htop and you might see it.

I’d suggest booting into a live-usb with a different OS and see if you’re having the same issue.

Does it normally run all that backup (rsync + timeshift) as part of the normal system for Mint? I haven’t used it in a long time.

@snorlax yes, but I don’t know if that is what it was.

Sounds like it’s one of apps you’re running causing the issue. Once you isolate the app try removing it and try installing it as a flatpak (or from the repository if running as a flatpak now) and see if that cures it. The alternative would be to wait for an update or perhaps a kernel update might fix it.

I’m running Linux Mint too and have had the same problem. With me, it occurred shortly after a new install. I haven’t seen it happen for a while since.

Timeshift runs only when you enable it and then only at the the time you specify, e.g. once a week or every day. After the snapshot is taken the system goes back to normal. Rsync is slow compared to snapper. It takes some time, more space and more resources. I guess Timeshift and btrfs would be more efficient.

As others have stated, something like htop or a system monitor that breaks down the usage by processes would be very helpful. I have found that an application can just get stuck doing a thing. Killing and restarting it will often correct that issue. Historically, there were some issues with Firefox that would have a rogue process just chugging away gobbling up CPU cycles and memory. That hasn’t been the case for me for some time.

@CubicleNate I agree. I just purged FF and installed Chromium as a replacement. I will be studying the issue. If or when I find out what it is, I will post what it was.

I’m running 20 now. I’m not going to upgrade just now, since i have everything running just the way i like. I’d like to keep it like this for a while. I must say, since that one occurrence, the os has been running smooth.
Can’t say i’ve observed any more spikes or weird behavior.

@CubicleNate, maybe I need to drop Mint and get an almost unhealthy obsession with the openSUSE?

@Eltuxo I would stay at a stable release, but every dang time someone comes out with some new features I can’t stand it and upgrade.

I still tend to use Firefox but based on some things I have read, I am re-evaluating that decision. The reality is, my browser selection is often being re-evaluated.