So I totally did not know about the extensions available for standard notes and now am really happy to find them. I was using simple notes but found out they were not encrypted in any way, so I was looking for something a little more private as well as open source, so my two options seemed to be simple note and Joplin. I first tried standard notes and was really not that impressed because I couldn’t do the simple thing of adding check boxes for grocery list and stuff. So then I tried Joplin next, it has a really awesome desktop app, and you can use your own cloud services to sync it between devices(like Nextcloud and some others) but the mobile app stinks, so I wasn’t happy with it either but stuck with it because of how awesome the desktop app is. Now while watching this show I started playing with the standard note extensions, and I am now much, much happier with it and am now switching back to it.

a better question is why does firefox not build on bullseye, which isn’t all that old. for mesa? a graphics acceleration library? maybe mozilla can take a look at their build requirements.

flatpak and snaps add a messy layer of abstraction and it just kicks the security can down the road to whomever’s maintaining it. At least with traditional packaging maintainers are forced to keep up with new libraries (that often improve security) but with containers you can just party like it’s 1999 forever. It feels like replacing one problem with another.

Something Debian (or any Debian user) can implement right now is packaging the sid or testing versions of their favorite browser as an AppImage and installing it in /usr/local/bin. It keeps maintainership/packages within the Debian family and it’s pretty seamless compared to flatsnaps.

Using flatpaks or snaps is against Debian’s strict policy of maintaining packages by its official maintainers and I agree here.

They should just open the gates for newer packages faster when it is needed like in this case, even if it is because of Mesa or Rust, but they are just too conservative about that because the policy only allows patches and security updates and “by no means” any new package to go into stable’s repository. Here you can already see the problem regarding Chromium.
Though sometimes you have to make an exception I would say instead of discussing the problem endlessly why something cannot be packaged.
Now I am not really sure if the missing libraries can be back-ported even to the same version of Mesa or Rust, my point is that I see it as an ideologically issue rather than a technical.

I think a good Christmas geek gadget would be pretty much anything Raspberry Pi (which isn’t already sold out). Or decent-quality accessories (known to be compatible) to go with such boards.

I recently got a CM4 in a small router appliance that I’m quite happy with. I must admit those CM4 boards are really cute and small, when you see them in real life. 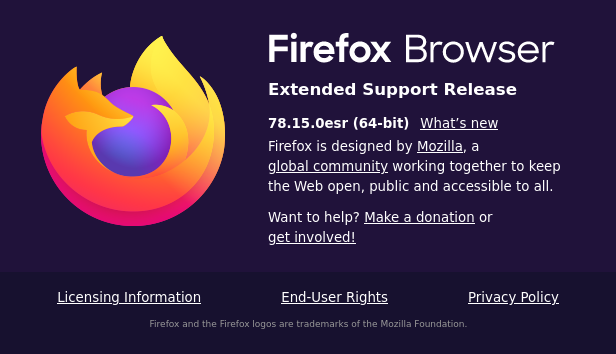 According to this Mozilla doc, there’s “(at least 12 weeks) overlap between the time of a new release and the end-of-life of the previous release”

So while Mozilla won’t consider Debian’s ESR EOL until ~Jan 05, it’s a pretty major leap behind the current ESR. 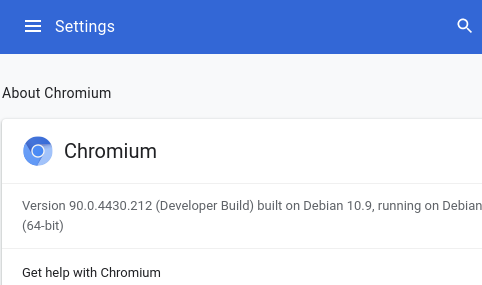 “Google does not offer old builds as they do not have up-to-date security fixes.”

The Chromium Docs - Chrome Release Cycle gets a bit above my head but i’m reading the dev builds as having no more releases after 6 weeks which’d put the Debian version several months behind on support.

Just to emphasize on this, here is Debian’s own recommendation:

As of 2021-10-14 19:19:07, Debian’s Chromium package in buster, bullseye and bookworm repository remains vulnerable to numerous CVEs as outlined in the Chromium Security Tracker. Consider using an alternative browser like Firefox, Brave or ungoogled-chromium.

Edit: As of now Firefox ESR 78.15, regardless of its lifespan, is vulnerable in all Debian branches except sid and testing.

I had question on the Yubikey is there a specific model that is best? That tech is relatively new to me and I collect all things techy. So I would like to know more from your prospective.
Thank you.

As a Debian guy here I just wanted to give the perspective that Debian’s release schedule is famously slow and only until relatively recently have we started having multiple released of browsers per month, let alone in a year.

Does no one else remember how FF changed its naming scheme to follow Chromium’s inflated build numbers? Basically, after v38 everything exploded, and we would have multiple versions released per a year. It is a fast moving target, and you have to wonder how anyone who packages it for as many architectures as Debian ever gets it done.

Thanks, everyone! Some great ideas for pressies from back in the festive season for many

Sorry I’m so far behind on podcasts, but just my reflections on browser updates, particularly with Debian Stable, as it’s been my workhorse for 8-9 years now, can’t even remember(!)

As far as I know Firefox ESR (default browser under Debian Stable) tracks normal Firefox but then “freezes” in a sense for several months during which only security updates are backported, not feature updates. I think this works fine for organisations, especially given that even a few years back feature updates on browsers sometimes broke things, though that’s not heard about much these days. Every several months or-so, Firefox ESR gets a large jump in version numbers when it moves forward several months on the normal Firefox numbering, so although numbering can look “very behind” that’s actually by design, and Debian inherits the same.

The issue of timely updates to browsers, especially nowadays with financial transactions, especially, is of course crucial, I agree; and they, like all security updates, really should be implemented as fast as possible. I generally find security updates on Debian Stable to be very fast. With the larger Firefox-ESR “jump” every few months, I am guessing because of the size of the job, there may well be a lag of some days, during which I definitely think use of Flatpak Firefox is preferable. That being said, once the normal repo FIrefox-ESR has reached the same latest version-point, I trust its security more than Flatpak.

I think an important question is, besides the browser, are other security problems with underlying libraries slow to fix on Debian too? I’ve never noticed this myself, though reflections from community members would be very welcome of course

As a side-note, I also think that users of LibreWolf need to keep an eye on security patches, because although it tracks normal Firefox updates, there can sometimes be a lag of a day or so (I seem to notice) before updated LibreWolf builds become available.

It is true, Debian applies security updates quickly. They have a default repo called ‘security’ just for that.

However, even with firefox-esr it does not pin to one version and upgrades point releases all the time. Here is my list over the last few months.

So while firefox-esr is not the ‘latest version’ it does release versions with security updates. This is explained on Mozilla’s versions page. To quote:

Extended Support Release (ESR) receives major updates on average every 42 weeks with minor updates such as crash fixes, security fixes and policy updates as needed, but at least every four weeks.

The problem wasn’t the regularity of security updates. It was how long it took from the point Mozilla released them to when they’d show up on Debian Stable.

Sort of like shipping 2 people a package every 10 days but one person lives in the same city and the other lives internationally. Both would receive packages regularly but 1 person would have old contents.

I did a quick Debian Stable VM test w/ fresh install of Firefox-ESR just now and it’s running version 91.5.0 (latest ESR) which was released 2022-01-11 by Mozilla so if you’re running Firefox ESR on Stable today you have the latest ESR version and security from Mozilla.

When I last posted above it was Dec 21st, same test, the ESR version was 78.15.0 which was ~2 months beyond the point Mozilla dropped security for 78.x so if you were running Firefox ESR on Stable in Dec you were no longer supported whether you were getting security updates or not. 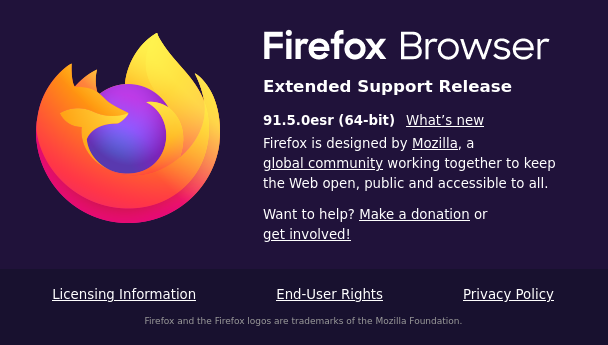 Indeed Firefox-ESR on Debian Stable does update very regularly. I wonder if perhaps it was at the “big jump” a delay of a few days was (understandably) noticed by some users, prompting this concern. It was a few months ago now, so I guess my lag even on viewing the podcast is a little funny

v91.6 is scheduled to release today which is the latest security update for Debian’s Firefox ESR (ESR point releases are the security updates). It’ll be interesting to see how soon it hits Stable.

According to this Mozilla doc , there’s “(at least 12 weeks) overlap between the time of a new release and the end-of-life of the previous release”

So while Mozilla won’t consider Debian’s ESR EOL until ~Jan 05, it’s a pretty major leap behind the current ESR.

Back when I posted this I made an estimate of 78.x support till Jan 05 but I got it a bit muddled, support ends 3 cycles after a new “whole” version upgrade so Firefox 78.x left security support 2021-10-05 despite Debian Stable still shipping it in 2021-12-17 when I posted. 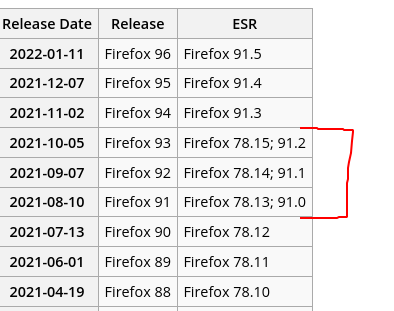 Indeed Firefox-ESR on Debian Stable does update very regularly. I wonder if perhaps it was at the “big jump” a delay of a few days was (understandably) noticed by some users, prompting this concern. It was a few months ago now, so I guess my lag even on viewing the podcast is a little funny

Strictly comparing my screenshots, Debian Stable missed over 2 months worth of security updates and had 3 months prior to make the jump to 91.

I don’t mean to bash on Debian but I think this thread illustrates how Debian users (me included) might not expect the ESR browser on Stable to be 2 months behind on security because it was no longer supported by Mozilla.

I tremendously respect the work of the Debian community but strictly from the perspective of keeping users informed, the ESR binary should have been replaced with a shim that launched a security warning before launch (or something similar) so users would know.

Yes, thanks for this. I’ll definitely be keeping a closer eye on how long between Mozilla updates for ESR and Debian filtering them through

Recently I have been extremely impressed with Fedora, not just 35 but several successive versions, I think going back to Fedora 31. It’s possible I might put it on one of my machines just for a secure up-to-date browser.

I have created a post in Linux applications about Debian Stable Firefox ESR status because I’m keeping a close eye on it myself and sharing my observations may benefit other users too.

Following from discussion in DL Episode 256 regarding Debian Stable and Firefox ESR updates, as a regular user of Debian Stable, I am keeping a close eye on this and sharing this info in case it’s of benefit to other users too: Quick link to official info on current Debian Stable (11 bullseye) and other versions: https://security-tracker.debian.org/tracker/source-package/firefox-esr Details: Firefox ESR updated by Mozilla to 91.6.0 on 08 Feb 22. Firefox (standard) updated by Mozilla to 97.0…

Unfortunately there are or were more like expat e.g. and now I see still not fixed. Most distributions patched the whole, either with a patched version or like Ubuntu (I think) with the newer upstream version.

If you use samba, good luck. Even sid is vulnerable.

Maybe I am seeing ghosts but I never experienced such a delay in security updates in Debian!

So I would revoke that Debian is pushing security updates or patches in a timely manner. At least not at the moment.