Why doesn't Debian/RPi OS use the "Fish Cake" emoji? 🍥

Apparently I’m the first person to notice this?? 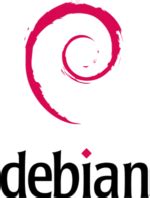 Added bonus: going down from 3 syllables to only 2.

What do you think?

I don’t think Deb and Ian are together anymore. Wikipedia refers to Ian’s “girlfriend at the time.”

Fish Cake Linux. I dig it. Needs its own window manager, Ramenu.

That’s because the wiki is on the same update schedule as Debian is. I can only assume they’ve been married for 20+ years, have 3 kids in college and are nearly retired by now.

I was talking about Wikipedia, though, not the Debian wiki.

So for all we know, the “Deb” in Debian might not even be a user of Debian Linux today? That would sure be ironic. All those packages whose filename ends in “.deb” just being pretty much completely arbitrary? Is she even aware of the honor being bestowed on her as all those .deb packages get installed everywhere, on all those Debian, Ubuntu, PopOS, Elementary OS, etc, desktops, laptops, and servers?

Furthermore, Ian has passed away!

Maybe “fishcake” Debian would become a much bigger hit in Japan, as I think that emoji originated as a Japanese cultural thing.

Turns out they were married and actually had 3 kids. The more you know!

Well, looks like Ian dodged a bullet! That could have been quite awkward if things had gone otherwise.

Well, Debian could keep the name (saving about 100,000 hours of labor), but just start using the

Like nobody ever mentions “Fish Cake”, but just goes wild with that emoji.

I would like to point out the similarity of the Debian logo to the Gloranthan Air Rune (from my beloved RuneQuest): 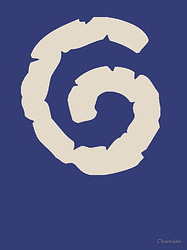 Air is associated with the Orlanthi people, who prize individual freedom, decentralized government, and the shaping of the world to match mortal ideas of justice (rather than vice versa.) They would likely be happy Debian users (especially if you accept @Ulfnic’s “Stormcloaks run Debian” hypothesis.

going down from 3 syllables to only 2.

I’ve been trying to get people to say “World Wide Web” instead of “WWW”, three syllables instead of nine for years.

In the spirit of the

OS, I’d like to put these Free, Libre, and Open Source 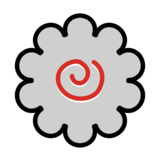 Although Google apparently didn’t get the memo… so I forked it.

Me too. In the cloud.

PS: I just suggested that Raspberry Pi OS use the fishcake emoji as their logo here. It would match the colors of the RPi 400!

Those are some sweet fishcakes. Who could resist?

Edit: Well, Raspberry Pi foundation disliked my fishcake idea so much, that they flat-out removed my post!!

I have never heard W pronounced this way (dub). In English the letter is named and pronounced “double-u”. I suppose some are apt to pronounce it “dubya” so they would save a syllable per W.

It was actually on some BBC show where I’ve heard that pronunciation, but that is already a decade ago

I’m starting to see emojis work, and appear just like they do here in Discourse, even within my Tilix terminal! Has this worked for a long time, I wonder, but I just had no filenames containing them until now?

I wonder if the next OS frontier is emoji based filesystems? Consider the speed increase of only having to do single character lookups.

You could also be 20 sub-directories deep in something like NERDTree and have plenty of horizontal space to show the whole tree.

I think the original Star Trek predicted this because of the amount of buttons on the consoles. We need 1,865 key keyboards to really get us there assuming we use Shift to double the emojis per key. 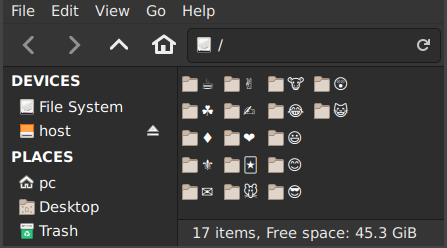 Have you ever seen the Anime “Cowboy Bebop”? When you look at the GUI which the hacker character Ed uses, there are lots of emojis flying around in this sort of VR, 3D desktop.