A long time vi user who switched to Emacs? Aren’t we supposed to burn you at the stake for this or something?

Hah! I believe that is the correct course of action, yes

I don’t know if it’s of any consolation, but I am still using evil keybindings in Emacs, so at least I’m not using vanilla Emacs.

I used to use vi (on Solaris) years ago, but on Linux I prefered the graphical editors (gedit, kate, or whatever). I have used nano, it’s fine but now I find myself just running leafpad, mousepad, featherpad or pluma for really quick edits (depending what is installed and if I’m editing a file for which I want syntax highlighting available)

On an unknown machine I might still try nano as it’s (almost) universally available.

For quick changes usually nano but for larger config files or any kind of source files I use vim.

This thread doesn’t have nearly enough death threats for a CLI text editor discussion.
I use Vim mostly. I tried a few variants. Nvim works, I realize that a lot of people love it, and I can’t put my finger on the issue, but something feels off about it. Vis is amazing, and I love it, but I always forget to type vis instead of vim… On a few systems I’ve aliased vim to vis and that works, but currently it’s all just vim in it’s default form.

Does anyone remember the fictitious holiday called “Festivus” in Sienfeld? It had a highly useful custom called “The Airing of the Grievances”.

Maybe when the Holiday Season comes around in a little under 2 months, we should have an “Airing of the Grievances” thread, so that everyone gets their chance, in a contained and safe place to do so.

Ditto, I broke myself to using the movement keys a decade ago and can’t leave (not because I can’t quit the editor

). I desperately want to be able to use other more maximal editors but even if they have a Vim mode, I can feel the rough edges.

Derivatives based on Evil-mode are booming (e.g., Doom or Spacemacs).

big fan of vim, it’s been the only editor in use on my systems for a hot minute…

came to the conclusion that I’d switch to neovim the other day, so now it’s the only editor installed on my machine(other than busybox vi) 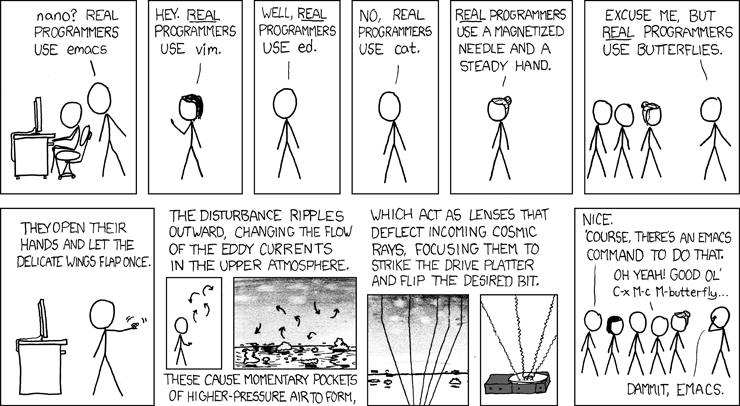 I like the “magnetized needle and steady hand” approach.

Getting used to Nano here. I like its simplicity and easy-to-understand command list. Reminds me of a Lotus 1-2-3 approach from the DOS days. Kinda wish it had a drop-down menu structure, but honestly, it’s great just the way it is.

I have used vi since the days of HP-UX back in the '90s. The downsides: steep learning curve and sometimes my WYSIWYG docs have random "k"s and "j"s in them from tying to scroll up and down. The upside: it’s a safe bet that vi is on every system in the world – all you need to do is get to the command line and go to work – plus your hands never leave the keyboard.

If I’m asked that question in person, with a deadpan face I always say, “I use six.”

How did I miss this thread? Neovim all the way here. Also, since nobody has said it yet, ed is the standard editor!