I have a System76 Lemur 6 issue. It is not a daily driver. It’s used as a travel or backup computer. For about the last six months the laptop has been just randomly shutting down as if it has lost power. Last week I installed Pop!_OS on it and updated it to 19.10. The after the reboot updated the firmware from settings. I hoped the firmware update would fix the problem but no luck. The shutdowns happen randomly and don’t appear related to whether the laptop is being moved or just running on the table.

Are you sure the power settings are not set to turn the lalptop off after X amount of time?

You might want to see if its a thermal issue. Check what your temperature is. You could also try reseating the RAM.

Is anything written to the system log right before it shuts down that might provide a clue?

No, the turn off is random. One night it would continually power off while I was trying to boot.

I removed the back and the ram was fully seated. I popped both sticks out to make sure there wasn’t any obvious damage and saw nothing.

I could be a heat issue. When I removed the bottom the heat-sink and fan appeared firmly seated and there wasn’t any give so the thermal paste is somewhat intact. What is the best method to keep track of the cpu temp?

Yeah, as @douhunt mentioned, it is starting to sound like thermal issue. Have you tried a can of spray air to clean out the fan/heat sink vents?

I have a (now 10 year old ) Toshiba laptop which developed this problem. I ended up having to take it apart and add thermal paste.

I see there is a system monitor in Pop!_OS. I’ll take a look at that.

Well that doesn’t give me temp. I’m running “watch sensors” in the terminal.

The BIOS can usually give you that, or there maybe desktop “Applets” which can do that

I’m trying to find something that creates a persistent log. Any suggestions would be appreciated. I’m still running the Gnome DE on Pop!_OS.

I’m also wondering if it could be the OS drive temp.

It’s not temp. The laptop just lost power with temp at 46C. I though I’d pick it up and test if moving it did anything and it cut off. Is there something that could be compressed on the front left of the laptop (bottom left of this pic) that could cause this? 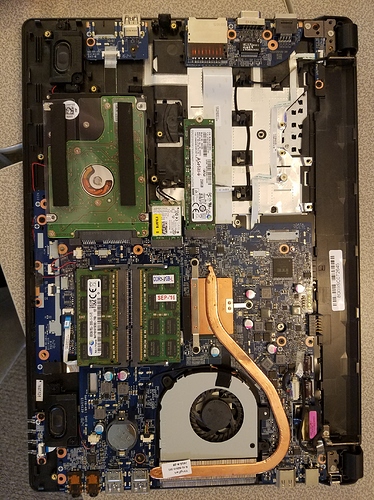 I believe kubuntu’s iso when booting from a live image gives you the option to run memtest.