HI Team, I have just quit Spotify for various reasons including the suggestions becoming less and less coherent. Basically the auto generated playlists were all track I like but didn’t stick to a genre, making it hard to establish a mood.

I am now shopping for a replacement. Having researched Tidal, Qobuz and Deezer I realised that these all have appalling Linux support. I.e. “Play your music from any where on all your devices except Linux”. Has anyone here got on well with any of these services on your Linux devices or are the rumours true and they are all totally unsupported,

I have seen a few third party cli applications written by “the community” but I excluding these as I am after an experience to replace Spotify, which by the way has excellent Linux support and is looking more attractive right now.

I tried Deezer and it runs great in a browser. I would say the responsiveness of Deezer’s web UI is a bit better than Spotify’s. Though I only tried the free version and personally still listen to LPs (see my username), CDs and especially local music.

I was hoping the vinyl in your name was from LPs. I have a terrible record player and really old records, but there’s something about them that are just so much fun. I know someone that has a REAL setup for them, and it feels like you’re in a live production of the audio every time.

I still use Pandora (pianobar on Windows, pithos on Linux), but the selection is limited. I did recently go through and rip all my CDs and convert them to FLAC (to keep high quality) and m4a (for playing as VLC on my phone in SD card or via Jellyfin). Granted, I do not have a ton of music, but I think if I did I would rip it and put it on some sort of DO droplet to play via airsonic or subonic.

I have a decent collection of music to tide me over until I get a new service. This includes vinyl. I make a point of listening to one LP every morning with breakfast. My collection can’t hope to compete with the tens of thousands of tracks these services have. While at work I get through about 6 hours of music per day so my own collection gets old fast.

My work pc does have windows though so maybe I just pick one.

One more thing is that qobuz has track purchases so that gives and opportunity to buy tracks for my collection.

My vinyl listening setup is not state of the art but it does its job and sounds marvelously.

I own old (used) and new LPs. Most of the new stuff comes from Bandcamp, the one music service I really use and appreciate and not tied to a subscription. The other half was purchased after attending concerts, something that is gone for now.

@vinylninja What turntable to do you use, mine is a Project Essential 3A.

I make a point of listening to one LP every morning with breakfast.

My favorite is Jethro Tull’s Thick as a Brick for breakfast. The sleeve unfolds like a big newspaper with all the lyrics on it. Reminds me of the good ol’ days!

I love the new vinyl that comes out on 180 gram records. The dynamic range is noticeably better.

The other half was purchased after attending concerts, something that is gone for now.

My community radio station used to host a record fair/music festival every year. It was fantastic for finding all kinds of stuff. Unfortunately I had to get rid of my setup recently but I ripped all the Sabbath and Rush so I’ll survive until I can replace it.

I have an old and original Dual KA230 that was produced in Germany, not one of those new kinds. It is a model from the late 70s and of wood. 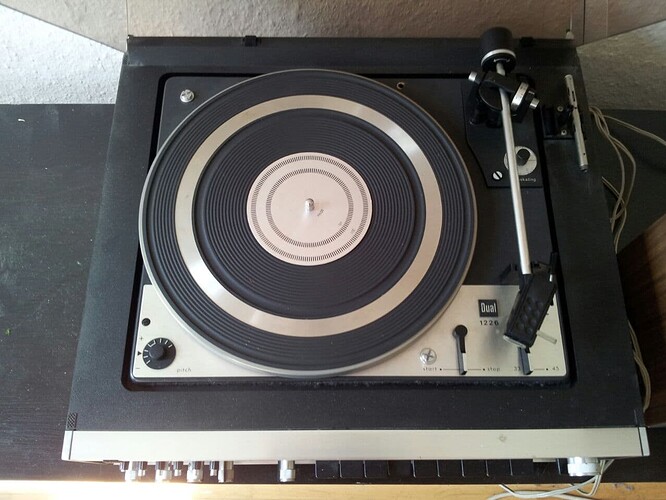 @gemmakaru, Jellyfin is definitely one good option and we use that here for other media.

But for music we use Airsonic as our music server.

Then for playing music we either just use the web interface, Strawberry music or our phones. On our phones we’ve been using DSub and find it works great. If you give DSub location permissions on your phone you can setup two addresses for your Airsonic - one for at home and one for out and about.

I have Tailscape installed on the airsonic box and use the Tailscale IP for out and about, then I can get our music from work, in the car, etc - just like Spotify…

I’ll try to check these out this weekend. Thanks for the suggestions. These are new to me.