Game Sphere What Do You Want to See for Content?

The topic pretty much says it all. Game Sphere is something that I want to community to feel like they have a say in the format. While game recommendations, etc., are something that I will keep doing, what are some other things you folks would like to see? I have been kicking around a bunch of different ideas, so would love to hear your folk’s suggestions. Though personally, I won’t lie a game news show is just not something that really interests me all that much. I want to focus on the fun gaming provides not all the stuff in the gaming industry that detracts from it.

It would be cool to see some content, or games highlighted that don’t need super machines to run. Like “Here’s a game you can play on your laptop with Intel onboard graphics”

Game reviews and how well they work in steam (with or without a version of proton) or out of the box on linux would be great!

I could start the list, but I don’t know how many others are playing, but Valheim runs perfectly in LInux for me. That’s the game that I probably play the most.

Next for me would be X-Plane, a flight sim. It’s developed on Mac’s but it cross platform. Probably not going to make a popularity list, though.

Personally, I feel I would like to see a more varied mix of games and game systems. It is ok showing games off GOG or Steam but it kinda neglects other gems of games on Linux. This becomes especially important as newer users find their way to Linux and want to branch out from Steam and Lutris.

So games that are still very much active would be Battle for Westnoth, Warzone 2100, The DarkMod, Veloran, Rolisteam VTT, Planar Ally VTT etc.

This show is not Linux specific as it relates to gaming, as far as diversity in the games and systems that is totally valid and part of the idea. I am asking looking to see how you folks want that presented, as there are numerous ways.

Maybe some clickbaity top lists to show people what are available. For example top5 platformer games for linux. Top 5 family friendly party games for linux etc. They would catch views and be informative at the same time.

Linux specific content from time to time I am totally OK with as most of the content thus far for recommendations has been lists of games that you can play on Linux. However, Game Sphere as an entire concept isn’t about just sticking to Linux-only gaming it looks at the entire ecosystem regardless of platform (so it encompasses PC, regardless of OS, Console, and regardless of system.) Also, I avoid calling them top 5 because it makes it sound absolute whereas recommendations come across as much more. Hey here are some games in this category you might not have heard about that you might want to try out. And people tend to take top 5 lists as fact and not opinion and just, unfortunately, leads to unnecessary arguing. It’s like someone saying these are the top 5 Linux distros when in reality it’s nothing more than someone’s opinion being stated as fact, not the way I like things presented personally so not my way of doing them.

Edit: I found a neat “Easter Egg” within Veloren. While just looking at the moon and Northern lights within the game, at night (from a rooftop, that’s a column of voxel chimney smoke just to the right of the moon there), a nice folk music song played, which seemed to be played with a lute (or maybe mandolin), plus flute accompaniment. It was actually rather touching. Without question, this was the best music I ever heard within an Open Source game. 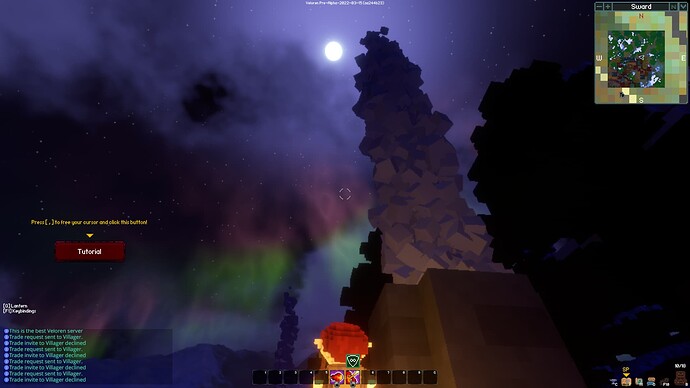 The folk song was actually a really good one, like a true musician played it!

This may be a bit niche, but I’d like to see a few tutorials on how to play some Linux-specific games out there. Every time I see them on the repos, I find myself wanting to play Battle for Wesnoth or 0 a.d. but I’m so intimidated by the interfaces for them. It would be good to have someone just step through a basic how to play on them.

0AD is pretty good but I found it pretty reductive when played competitively. Xonotic is excellent though it’s already had a lot of coverage.

This is a feeling. I actually have the official iOS app on my phone and have never opened it.

I’d be interested in some recommendations to maybe shore up some gaps with games that are must plays that I missed the first time around.

Generally speaking I don’t play games though i’ll dip a toe on occasion but because of this conversation I finally tried Battle for Wesnoth.

Tutorial is essential but short. There’s a story to it and the option to nerd out on character stats but I was able to ignore both and complete campaigns on the normal setting. You cannot ignore nerding stats on the hard setting and it’s VERY hard, LIKE ALL GAMES SHOULD BE dag nabbit!

The only gripe I have is the maps i’ve seen are vertical instead of horizontal which feels like a mobile 1st choice but it plays well either way.