See pic with error details here: https://imgur.com/a/rPNz3pv How to fix this? How to gain permission? Newbie.
.
. 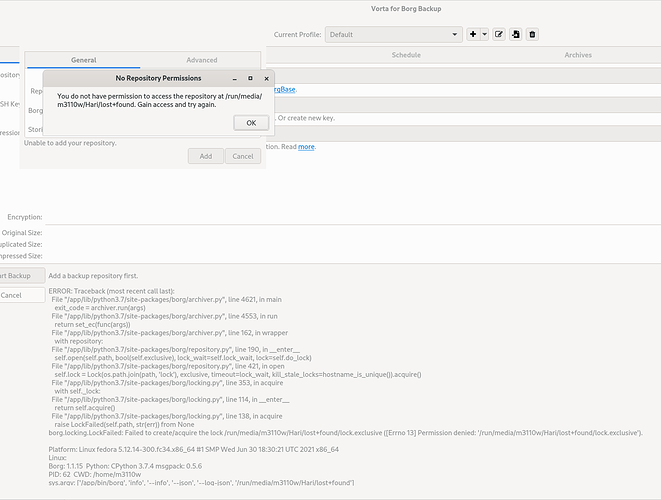 Update. I’ve had way too many problems working with Fedora. I had no idea Fedora would present so many problems and crashes. I’m switching to Ubuntu so I guess this issue is resolved.

From what i’ve seen throughout the threads is you’ve taken the World on all at once and props to you because 1/4 of that would have crushed me in the beginning.

Just a note of caution, be careful taking recommendations because they’re relative to the people giving them. For example I recommended virt-manager to you, that’s a pretty advanced environment. I love Fedora but app experiences aren’t curated so it can get pretty DIY. Similarly borg is pretty up there.

I’d ignore people telling you what they think the “best” OS or software is, just go window shopping and use the thing that gets the job done. As you want to push out and do more stuff you’ll be ready before you know it.

Thanks for your reply. Trying to fix all the problems I was having with Fedora just got to be too much. Yikes! I used Ubuntu for a brief time about 10 yrs ago and I remember it wasn’t too bad. I’m sure it’s improved a lot since then. Of course the best OS is the one that works for the individual. Thanks again. Cheers! (Don’t tell anyone but I’m really missing Windows. Almost everything just worked smoothly and intuitively.) The command line is great, but when it HAS to be used to get many things done, then the OS should (in general) not be used by beginners (unless they’re only using the most basic apps and nothing else).

Yeah my attachment to Windows 7 was unreal. I was using several apps, even developing with Notepad++ in a Windows VM for 2yrs over a shared folder. Something about the way it rendered Arial and how Notepad++ looked I just needed.

I’ll trade you a secret, there was a thread made when this forum began (still going), it’s for sharing a screenshot of your desktop. I didn’t do one because I was embarrassed that I added the word “Start” to my App Menu button and couldn’t do without it.

I’m fully transitioned now and a switch to Windows would destroy my productivity. I can do more than I could ever dream on Windows but man was it a hard transition lol.

Good points. Thanks. I would say I’m not so much attached to Windows as I’m attached to an OS that just works without having to constantly go on forums and and spend hours researching obscure terminal commands. The Fedora UX/UI was great! Much better than Windows. But because Fedora is an OS only for CLI terminal experts and not for beginners, I had to ditch it. Hopefully Ubuntu is better.

If I was a good programmer and had lots of free time and money, I would develop a PURE GUI Linux distro for the average everyday user that got rid of all (or as much as possible) requirements to use the terminal.

Fedora 34. Is there a Linux terminal command that can copy the contents of one external drive to another? When I copy a large number of files using a GUI File Manager it’s VERY slow. I need the files copied in native format (not compressed).

You should give Linux Mint a try. Its built around Ubuntu too, I barely ever have to fiddle with it. But even Windows isn’t purely GUI, there’s a lot of stuff thats quicker and easier in the command prompt.

For the most part though the grand majority of surface level tasks can be done through some GUI application.

When I copy a large number of files using a GUI File Manager it’s VERY slow.

I think this is just a product of transferring over USB. But a terminal command to get this job done would be our good friend RSYNC.

Does Linux Mint have access to the same large number of repositories as Ubuntu?

But even Windows isn’t purely GUI, there’s a lot of stuff thats quicker and easier in the command prompt.

Good points. Yes, Some things can be done quicker with the command prompt, certainly. But the issue is when Fedora forces everyone (even newbie beginners who’ve never seen a terminal) to learn CLI commands. If I was in charge I would make the Fedora website say in big bold letters “Beware! Fedora is not for beginners! Unless you’re excited about learning lots of arcane terminal commands”.

The key point is that in Windows, users have a choice. They can totally ignore the command line and happily get all their work done. Or choose to learn CLI. Fedora does not offer that choice.