Embrace, Extend, Trust? The campaign to build trust with Microsoft and how you can help

Good day, everyone. I wanted to start this post to provide you the resources to make your voice heard, to show Microsoft why you should be valued as a customer, and really change the landscape of Linux desktop use.

I am championing a number of initiatives that need your help, if you would be so kind.
OneDrive
Visual Studio
Edge (Chromium)
Microsoft Office

I have linked the relevant UserVoice posts that I am striving to push to the top. Please take a moment and vote (some items you can cast up to 3 votes on).

If you don’t know me, I’m @chscott_msft on Twitter and I work for Microsoft. I have made it my personal mission to build/rebuild the Linux community’s trust of Microsoft as both a member of the community and an employee. I have had success in pushing for a Microsoft Teams Linux client and I want to continue that in other applications. Feel free to let me know your thoughts and opinions. These are not the only things I’m working on, just the most visible right now.

Disclaimer: This is not my day job. This is merely a personal passion as a Linux user to see things improve for all users around the world. Even if you don’t care about MS products on Linux, this might push some other vendors (like Adobe, etc.) to truly consider serving this community, too. 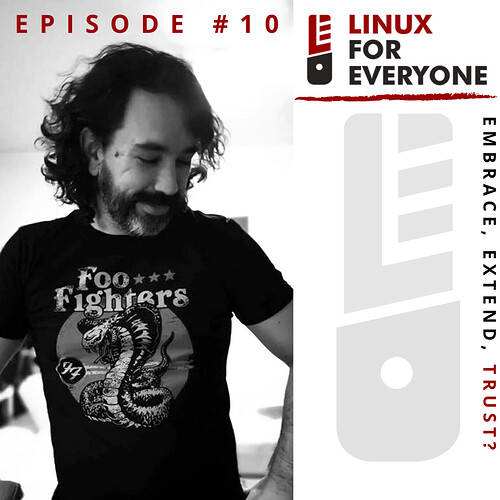 A special interview with Linux advocate Christopher Scott, a Microsoft employee who's fighting for change inside the company, and trust within the Linux community.

I plan to put my thoughts in this post right here when I get the time to do so but in the meantime I’ll just link the part of TWinL 82 where I talk about it.

Until M$ changes the processes, I will never trust them. The amount of data they are collecting from windows 10 is a perfect example.

I don’t personally use any of the products listed above, nor do I have any interest in them.

Microsoft Excel is the only program I truly miss after switching to Linux on my personal laptop. I use excel every day in my job as an accountant and I just can’t adapt to libreoffice calc at home, it’s just not quite there. I can live without word or PowerPoint but I’m sure there are others who have the same feeling about those that I do about excel, so to see the ms office suite on linux at least as an option would be great in my opinion.

I could get my wife off of Windows if it weren’t for Quicken and Excel. I feel your pain there (she formerly worked in accounting).

Really, the only real reason I’d have to move her to Linux is that her computer will “bugcheck” randomly and the screen goes black. Power down and back up, it’s fine. Event logs give me no clue as to why and I still hesitate to move from 1809 to 1903 on it.

I really appreciate you reaching out @christopher_scott! I have been on Linux full time since 2003 and my distrust for the company is pretty deep at this point. However, things have changed as of late and I would say, with much confidence, that today, I distrust some other big players more than Microsoft.

Personally, I would love to see something like Microsoft Office be supported in Linux, be it a directly built binary or even using the Wine lib to do so. Either would be fine in my eyes.

Please do not be discouraged by negative comments as I believe that everyone and any company can be redeemed.

@christopher_scott I listened to your interview on l4e tonight, and was pleasently surprised with your candor and enthusiasm for pushing applications to Linux.

As someone who needs to use teams and OneDrive regularly for work, I appreciate that I can (or soon will) be able to use them natively on my OS of choice.

As for feedback, Microsoft has a long way to go to gain back trust from the floss community. If people like you keep working on the inside, it gives me hope that they are headed in the right direction.

I appreciate you reaching out to the community. I remember using MS-DOS 3.31 when I first started learning computing. Throughout the years Microsoft was a innovative software company that pushed the boundaries of technology. I would like to see this type of momentum happen again. Not only by benefiting themselves, but the open-source community as well. Continue creating, contributing, and releasing existing projects as open-source to push the innovative spirit of the community. Push technology forward that benefits all ecosystems. Be a supporting organization of open-source desktops through donations and code. Adopt more open-source standards on your existing platforms. Open-source communities not only create new technologies but also maintain existing ones, benefiting all of humanity.

I think in the workplace the fact that we use Office365 and everything else Microsoft, it would be nice to have those things in Linux, right now the lack of Teams client is noticable, I use the web client which nags me every time I login to download the client, which doesn’t exist.

Outside of work though, the key word you used was customer, they can see me as a customer but I don’t want any of it, for reasons that probably don’t need to be said again. I get that MS probably want us to want them but it’s creepy and stop following me home I said no.

First, I want to say that I really appreciate Christopher’s efforts within Microsoft. A Linux client for Teams would have been really helpful at my last job. A Linux version of OneDrive and Office would be incredibly useful for a lot of people.

That said, I don’t trust Microsoft.

What I love most about Linux and the open source community is that it is a model of software development that is fundamentally by and for the users. Large scale design decisions are made based on user needs and workflows. Features are added because users develop or request them. Compatibility with other software is prioritized, or at least easy to achieve due to open formats and source code.

Microsoft’s (and proprietary software companies in general) approach to software development is antithetical to this. There are a whole range of features that come from this:

All of these are by definition harmful to users and fundamental to the business models of companies like Microsoft, Google, Apple, Oracle, Amazon, etc. Microsoft is probably not the worst these days.

I have Windows 10 dual-booted on my laptop. It’s noticeable that almost everything that has annoyed me in 10 is a deliberate choice of Microsoft. The installer steers you into using your Microsoft account to log in (which locked me out of my laptop for about 10 minutes after a password change). Edge will take every chance it can get to prompt you to make it your default browser. Whenever you save a new file in Word it will default not to your documents folder but to OneDrive, a service they want you to buy. The start menu is cluttered up with ads. Updates are pushy. It takes a lot of work to nearly disable the telemetry. None of these bad design choices that muck up what was otherwise a very nice user experience are accidental. They are deliberate choices compromising the quality of the software we purchase to encourage us to be more profitable customers for Microsoft.

If Microsoft and Microsoft developers would use \n (Unix style) line endings instead of \r\n, you might get the love of most Linux developers.

On a more serious note, harm done by one community to another requires some kind of penance. Penance that changes perspectives requires actions that are not profitable, but that’s the point. The Linux and broader open source communities are communal in nature, so Microsoft must demonstrate that it can be trusted to make contributions as an upstanding member of the community, not an interested third party. I understand that it’s a hard ask for a large corporation, but that’s what people do to be accepted by a community.

I’m sure other people have better ideas for specifics. I wanted to add an intuitive/emotional perspective.

Any chance on the line ending thing?

I’m not a huge fan of buying into a corportation’s ecosystem, but my university uses Microsoft everything, so I use Teams and OneDrive a lot (Word online sometimes, but I prefer to write in LaTeX.) The third-party apps I use right now work okay, but they do have some limitations (such as the Teams app not being able to display the class SharePoint properly.)

One thing that would have to be in an official OneDrive client for me would be a command-line interface. Not only do I live there, but it would also improve the app’s flexibility (e.g. a tiling window manager user who doesn’t use XDG autostart can add a line to their init script to allow OneDrive run in the background.)

Following on this topic, Microsoft this week released a Teams client (preview) for Linux.

I installed it because we use Teams, it mostly works except for some odd window behaviour.

remember its technically a pre-release beta so there are probably a few glitches… but kudos to Microsoft for putting it out there!

What specifically are you running into?

Well it doesn’t seem to have happened again since so probably nothing to worry about.

At a certain point when I tried to restore or minimise Teams instead of the application window, which would have been maximised on that desktop, I would get what was essentially a frame from when xscreensaver had been running. Clicking left or right mouse where the window should be had no effect, killing the process restored everything back to normal. Starting Teams again everything was fine and has since remained fine.

For what it’s worth I’m using an XFCE spin of Fedora.

Thanks! I had an odd maximize/resize glitch earlier before this release. Hopefully it’s all sorted out. Feel free to @ me if you run into anything else or reply here. I’m also on the Telegram group (which I will probably see first).