Article:2 Ways That Desktop Linux Can Improve And Capture A Larger Audience

I was going to blog my opinion but for now, I’ll just lay it out here for you folks.

I know there’s always room for improvement, but I sincerely believe the Linux desktop could capture a larger audience as it is, without further improvement if only people would try it! I do believe the barrier is fear of change. If that could be reduced, e.g. for long-term users of Windows, an initial solution which leaves Windows intact and in-place, could be useful. I have heard many, many times of people dual-booting Linux with Windows and the Windows users gradually forgetting that Windows is even still on there because they start to enjoy Linux so much they hardly need Windows (no surprises there)!

I personally think that on fast new machines a VM could be a very good alternative to dual-booting. Although it does slow down the Linux system because it’s virtualised, on a fast machine I think a virtualised guest Linux system will easily approach the speed of a Windows host. Installing a VM with a whole load of fantastic FOSS software that a Windows user doesn’t have or has weak alternatives to that come with the Microsoft OS, could encourage users to at least then dual-boot Linux, after which they’ll probably find Linux becomes their main system over time, and Windows will only be used when “industry standard” software absolutely has to be used, that is only available on Windows.

You won’t see a massive influx until you can go into large retail outlets and buy laptops with Linux installed. Until that happens - now matter how much better Linux gets - it will be for those in the know only.

Over the years I certainly think Chromebooks have benefitted from this approach.

Obviously we need Cortana, is someone doing a port?

The telemetry needs to stay though so Microsoft can keep enhancing the service.

I think it’s more about education than throwing away big money.
Proof: Mac OS market share in July 2019: 3.88% which looks quite pathetic provided all the Apple ads we see everywhere.
And while it is cool that System76 ships computers with their customized Ubuntu preinstalled, I’m not sure selling overpriced computers (Thelio Ryzen 3 2200G/128gb SSD,8gb ram 3200mhz/1 year warranty = 899$ vs CSL Sprint 5703 Ryzen 2200G/240gb SSD/8g ram 2666mhz/2 year warranty = 279€ but who knows, maybe your everyday computing experience requires an ATX case with a piece of brazilian rosewood) the way Apple does is the best thing to do to bring Linux to the masses.

Normies (especially them) don’t like changing their workflow. So the earlier they use Linux, the better. It should happen at school. People need to be educated about the subject, to understand why it’s better to use one operating system or another, to understand they’re not forced to pay for a Windows license whenever they buy a computer and that privacy is important and involves not using certain things on a computer.

Contracts governments sign with Microsoft for Windows and Office are a bottomless pit. If a fraction of that money went into Linux, the market share would skyrocket. If people mainly used Linux at school and work, there would be more OEM interested in selling PCs with Linux preinstalled as they would likely want to use it at home (and save some money in the process vs Windows). And that would make more Linux gamers and more devs interested in developping for Linux (even though it’s slowly becoming less of an issue with the fantastic work of Wine/Proton).

Conferences and trailers are funny to watch when you’re into technology, but I’m not sure normies would care that much about them and jump to their local store to buy a PC with the latest Manjaro because of it.

Here’s a quick mockup, we can do this. 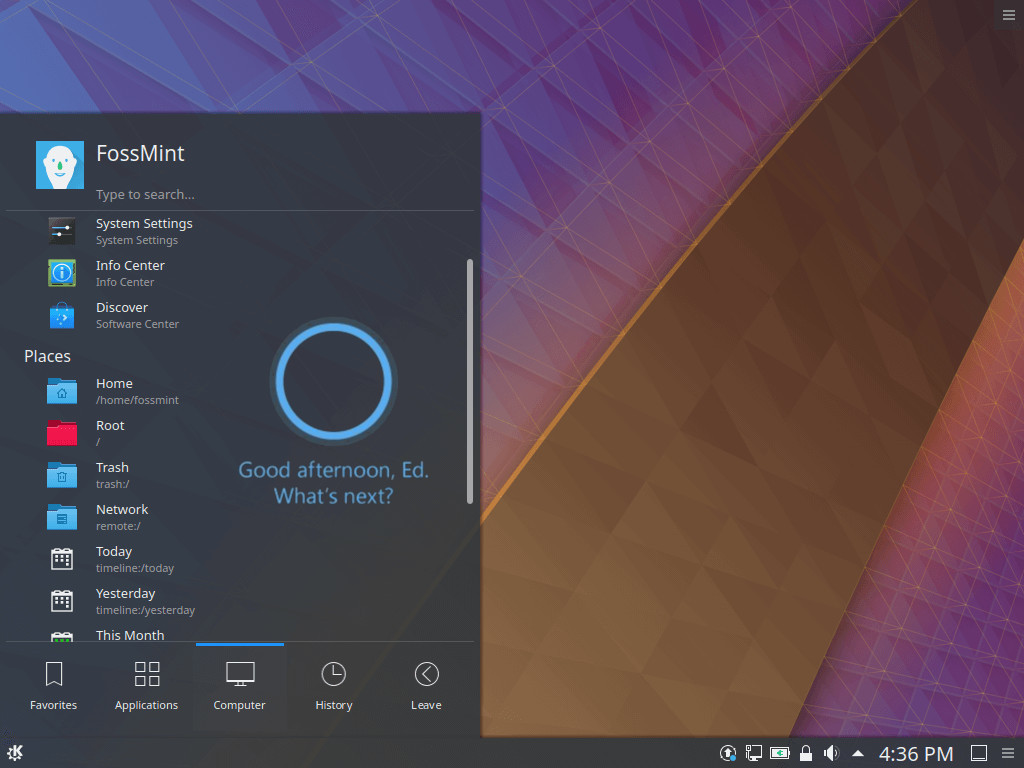 But where is the huge Candy Crush icon ?

Obviously we need Cortana, is someone doing a port?

You would have a better chance with Amazon’s Alexa. I don’t speak of the other because of their tracking, spying, censorship, search manipulation, and election meddling.

You won’t see a massive influx until you can go into large retail outlets and buy laptops with Linux installed.

It was being done at Fry’s Electronics on refurbished HP computers. Then Microsoft bought out the distro then shut it down.

There is no money to be made with Linux desktops, so nobody will invest in Marketing and nobody will put Linux on their desktops and laptops and loose their discount from Microsoft. As long as governments do not punish this anti-competitive behavior, Linux will be at a huge disadvantage.

I think t should be a little doggy, or animated paperclip…

This! Everything else is just screaming in the wind. Microsoft actively worked(s) to stop adoption (wonder why Dell doesn’t have its linux offerings on its front page? It’s because Microsoft hearts linux in that special way) and until that’s remedied, all the slick videos in the world won’t change an effing thing.

To take on the Desktop, Linux needs to not just be “good” but unambiguously the best in at least 1 of the 3 major categories: Design (Graphics/Video/ect), Gaming or Office work (Accounting/Documentation/ect).

Gaming and office are hard to crack because they require a lot of industry cooperation else you end up with a bunch of compatibility layers that cut into reliability and the native experience. Design as Apple discovered is something you can take on though because the applications are very centralized.

If the quality of Linux design software started equaling non-FOSS alternatives in all major categories Linux would automatically become the best for Design because it’s FOSS. That’s the way in and the rest can follow.

I’ve implemented the community feedback into the mockup… Along with Candy Crush we have an Amazon Alexa option for the privacy conscious. Showing direct advertising to the App Menu gives Linux a more professional look a bit like NASCAR.

To the right we have Clippy to help new Linux users though there’s some residual actions stuck deep down in it’s binary that seem impossible to remove. On a side note if someone could contact the Arch devs about getting Clippy into the new install process I think it’d go a long way. 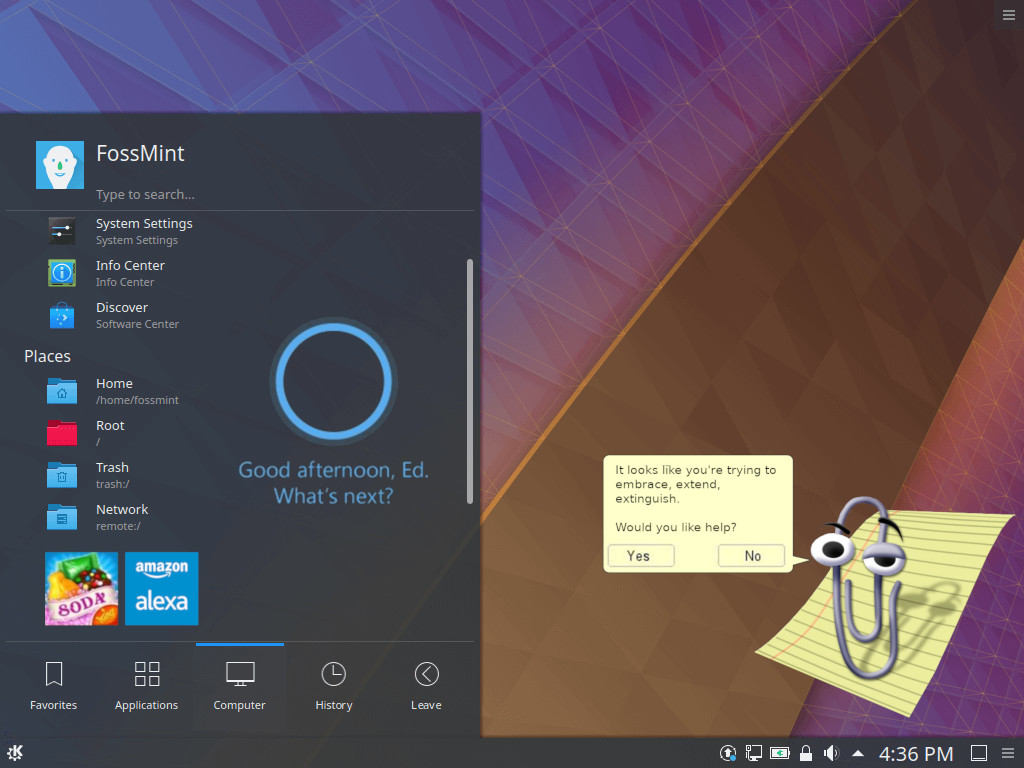 With simplicity being a driver for new audiences, the way in which Linux (distros) distribute applications could be a factor which would not embrace a new audience. IMO, streamlining the application discovery process could definitely influence the adoption process.

I’ll leave aside Windows (I haven’t used a Windows PC for 15 years), but I’m not sure that Apple visually markets much of it’s simplicity, except through branding, rather focusing much of its efforts showing the capabilities of its products (see iPhone photography, or iPad workflows). For basic use onboarding, they have free workshops in store.

Thinking about it, I wonder if the original premise of the article is sound, that Linux needs marketing on the level of Microsoft and Apple today. Could it be perhaps that the legacy of the those big companies over 30 years has had a pronounced cultural effusion? Should we then look back to the marketing pushes of the late 80s with an eye on modern day taste?

Perhaps that looks more like getting side glimpses of “influencers” using KDE on instagram, in contrast to spending a few million dollars to render applications in 3D space and broadcast them over the World Cup.

I think it is also a social issue. Most people will be confronted with Windows first because that is what the schools are using. It is like Skype instead of something more privacy focused etc. Because everybody is using it.

Just a question? isn’t that turning Linux into windows? or even Apple?. Maybe before we go and say what should be, we go back and read the History of how linux was created and what it was created for. IF we start making linux look like MS, Then we better have lots of money for the patent trolls that MS will hide behind, cause you can bet there will be lawsuits.

Linux is a fully working OS, we just need to pay attention to detail and fix what we already have available. 50,000 plus apps in nothing to sneeze at.

I agree, we need to be thinking about things like Open Clip, FOSS Crush and GNC (Recursive: GNC is Not Cortana).

We’re already making progress on FOSS Crush and if we can get the Mycroft team to change their name to GNC then we just need Open Clip and better UI integration.
https://alternativeto.net/software/candy-crush-saga/?platform=linux

We need to go where the people are, maybe a game about switching from Win 7 to Linux? You’d score points for every step a user has to take from the hardware up and the objective would be to do everything you did on your starter win7 machine and more on your new Linux install.

If you virtualized it a lot of the graphics/game programming would be done for you.